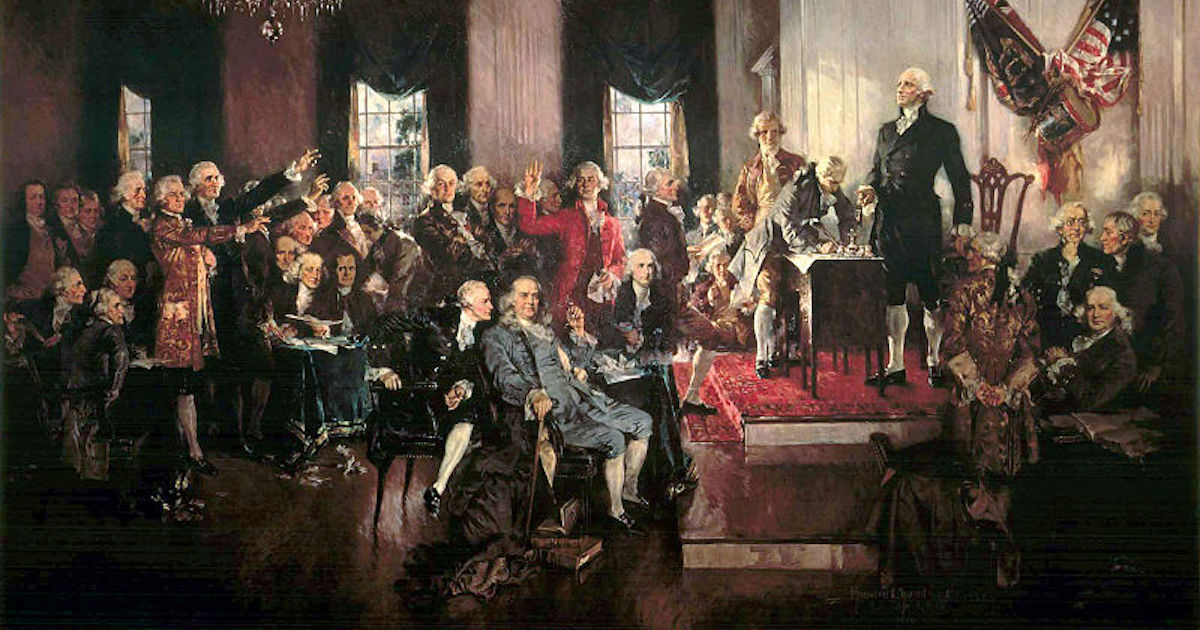 It's Our Republic, If We Can Keep It

Most people know the story: Moments after the Constitutional Convention ended in 1787, Ben Franklin walked out of Independent Hall and was approached by a woman. The woman asked, “Well, Doctor, what have we got, a monarchy or a republic?”

Franklin replied, “A Republic, if you can keep it.”

The account is quoted everywhere from the classroom to the Halls of Congress. The message is simple: A form of government that is responsive to the people can be easily lost if the people become complacent.

Today, we have a republic in dire crisis. We have a system of government that is responsive to a partisan minority and is so tightly gripped by hyper-partisan division and dysfunction that government inaction has become the norm and people are expected to just accept it.

This cannot be the republic the Founders had in mind.

What is happening to the US political process, however, is not a recent development. Things have just become so irreconcilable in the last decade that more people are starting to pay attention and speak out.

Former Daily Show Host Jon Stewart, for example, lamented in an interview for New York Times Magazine that nothing meaningful can be accomplished in Washington because our politics is controlled by a partisan duopoly.

“Patriot Act” host Hasan Minhaj also recently commented on the paradox that “it feels like we have a representative government that doesn’t represent us,” something nonpartisan reformers have been addressing for decades.

Yes, I said decades. The problem may be impossible for many to ignore now, but it has gotten this bad because of rules established by members of private political parties -- the GOP and the Democratic Party -- over the course of several decades to solely benefit them.

Minhaj addressed the electoral problem of “winner takes all,” which greatly contributes to the zero-sum mindset politicians use to divide the electorate. Your side either wins or it loses, so the stakes have infinite repercussions.

Not only are elections “winner takes all,” but in many cases, as Minhaj points out, the winner doesn’t even need a majority.

“We misunderstand the most basic principle of our democracy,” Minhaj says. “We think we have “majority rules,” but that’s not true. It’s actually plurality rules.”

The state of minority rule in US elections gets even worse when you consider that most elections are decided in low turnout primaries because nearly all races are uncompetitive due to a host of factors, including partisan gerrymandering.

These primaries divide voters into two sides -- Republican or Democrat. Even in states that have partisan open primaries, voters are told from the very beginning of the electoral process  to pick a lane and stay in it.

In some states, only members of the two major parties can participate in these taxpayer-funded elections. In other instances, like California’s presidential primary, the rules are designed to be so complex that millions of voters are left confused on their options and if they are even allowed to participate.

Millions of voters across the country are disenfranchised by the partisan primary process, yet even when these low turnout elections don’t ultimately decide the winner in an election, they always decide who all voters will pick from in November.

Minhaj used the 2016 Republican primary as an example to show viewers what this minority rule truly looks like. President Donald Trump won the Republican nomination with a little over 13 million votes -- or 5.5% of all eligible voters in the US.

Hillary Clinton, meanwhile, got just under 17 million votes, which again is a slim portion of the eligible voting population. Yet, those were the options given to voters in November 2016, and they were the most unpopular candidates in modern US history.

Party primaries. Winner takes all. These are some of the most fundamental problems with the US electoral process, and yet they are maintained and controlled by the same private duopoly that writes all the rules and regulations that govern the entire political process.

This all sounds eerily similar to the “network of small, complicated rules” Alexis de Tocqueville once suggested could come from a new type of despotism “through which the most original minds and the most energetic characters cannot penetrate, to rise above the crowd.”

“The will of man is not shattered, but softened, bent, and guided; men are seldom forced by it to act, but they are constantly restrained from acting. Such a power does not destroy, but it prevents existence: it does not tyrannize, but it compresses, enervates, extinguishes, and stupefies a people, till each nation is reduced to nothing better than a flock of timid and industrious animals, of which the government is the shepherd."

Yet, it doesn’t have to be this way. Nonpartisan reformers and their work across the country are evidence of this. These are individuals  and organizations that are challenging party primaries, “winner takes all” elections, political corruption, rigged ballot access and campaign finance laws, and more.

They are flipping the script and re-writing the rules to change the incentive structure of our political process from one that serves a minority invested in their own private interests, to one that is accountable to voters.

This change, however, will not happen overnight. It will require diligent action on the part of all those who feel the current status quo is not working for the people -- which is most people in the US.

The republic belongs to its citizens, and if we want to keep it, it will require all of us to act to undo the myriad of systemic problems that threaten it.

Here are some of the latest developments in this ongoing fight:

Over 90,000 St. Johns County voters have just been denied the right to vote in the race for county sheriff because of suspected party manipulation of the primary rules.

Florida has closed primaries. However, under state law, a primary would open to all voters if candidates of only one party run in a primary election and the election is decided in the primary.

This was supposed to happen in the St. Johns County race, where only two candidates had filed, both Republicans. However, a last minute write-in candidate filed for the race literally hours before the registration deadline.

The candidate, Scott Boutwell, reportedly has no law enforcement experience and works as a maintenance manager in the transportation industry. The filing has raised a lot of eyebrows, including from Republican candidate Chris Strickland.

“Over 90,000 people have been done a terrible injustice by the deceitful and disrespectful act of closing the primary election on the last day of qualifying,” wrote Strickland, in an email to supporters.

He encouraged non-Republican voters to change their party affiliation to vote in the August primary. However, the core issue is that the right to vote is conditioned on affiliation with a private organization -- in this case the Republican Party.

“The ‘write-in loophole’ is used by Democratic and Republican consultants, candidates, and campaign managers across Florida to trigger closed primaries. It’s one of many (many!) dirty tricks used to reduce the voice of the people,” tweeted John Opdycke, president of Open Primaries.

Florida voters will have a chance to reform statewide and legislative primary elections to a nonpartisan, top-two system under Amendment 3 in November.The system removes party primaries completely and allows all voters and candidates, regardless of party affiliation, to participate on a single primary ballot.

The major parties challenged the top-two initiative during the judicial review process, but the court said it was good to appear on the ballot. It needs 60% voter approval to become law. If approved, Florida would be the first major battleground to adopt nonpartisan primaries.

A campaign to deny Maine voters the first-in-the-nation presidential election to use ranked choice voting claims it has enough signatures to put its people’s veto on the November ballot. The secretary of state has until July 15 to review signatures RCV advocates say were collected by out-of-state signature gatherers.

The people’s veto targets LD 1083, a 2019 law that extended the state’s historic RCV use to the presidential election process, including both primaries and the general election. The bill, which officially became law in January, all but ensured that RCV would be used in the 2020 election.

Now, RCV advocates are fighting what they call an illegal campaign to repeal the law in the courtroom and in the signature count.

“Maine voters have twice voted for ranked-choice voting at the ballot box, and we are confident that they will do so for a third time this fall if necessary. Voters want more choice and more voice in our elections and in our democracy, and not less,” said Cara McCormick, Treasurer for The Committee for Ranked Choice Voting 2020.

“We will carefully check the signatures that have been turned in, and we will continue to work through the courts to challenge the inappropriate signature gathering process.”

A lawsuit pending in Kennebec County Superior Court asserts that the petition drive violates state constitutional requirements that limit a people’s veto to laws that have not been enacted into law.

This is an important distinction when comparing to the 2018 people’s veto campaign to protect a voter-approved RCV law for state elections. Maine voters overturned a legislative action that set RCV in state elections up for repeal, but that law would not have gone into effect until 2021.

LD 1083, on the other hand, is already the law of the land in Maine, and RCV was already slated to be used in the Fall presidential election, along with races for US House and Senate.

“The Maine people believe that our president should be chosen by a majority of voters. Ranked-choice voting ensures that a presidential candidate who is opposed by a majority can never win Maine’s Electoral College votes,” said McCormick.

It is important to note that the people’s veto does not affect RCV’s use for statewide, legislative, and non-presidential primary elections or its use in US House and Senate general elections. Maine voters used RCV for the first time in these races in 2018.

It’s unclear at this moment how the courts will move on the lawsuit. Stay tuned for further developments on this story.