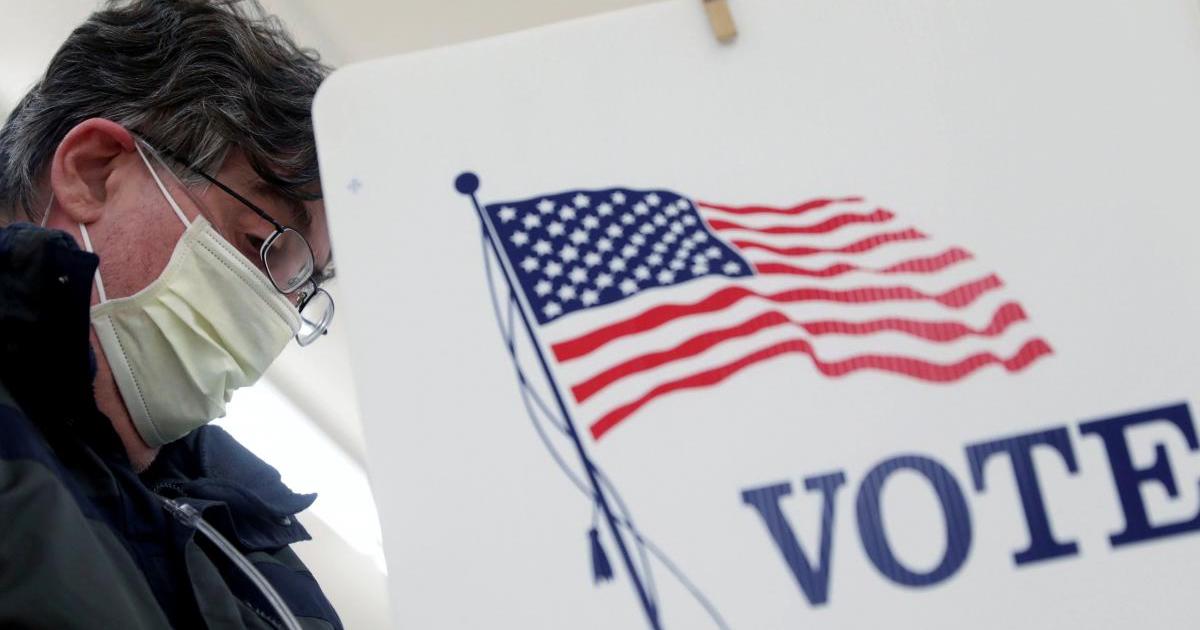 The one silver lining pro-voter reformers see in the midst of these unprecedented and troubling times is that voters are now even more aware of the weaknesses in the US political and electoral process, and they want change.

Most states with in-person voting scheduled in April were forced to postpone their primaries or elections until the early summer. Meanwhile, the one state that didn’t cancel its in-person voting, Wisconsin, has now reported at least 19 new coronavirus cases as a result.

Reformers are using this time to take their message directly to voters, whether it is to strengthen vote-at-home nationwide, educate voters on how misinformation and the consumer data market keep the political process rigged, or to inform the populous on new reform proposals to improve US elections.

With so much going on in the pro-voter reform space, it can be difficult to follow all the latest developments. Here are a few stories readers may have missed and should follow looking ahead to May and beyond:

There is no question that ranked choice voting has considerable momentum behind it as new initiatives appear on state ballots and efforts grow to pass it in areas across the country. That momentum, though, got its most significant boost in Maine.

Maine voters approved its use in state primary and general elections in November 2016. They then defended it against an attempt by the legislature to repeal it with a people’s veto in June 2018. Then, the state legislature made history yet again by being the first to adopt RCV’s use in presidential elections.

RCV Maine contends that the GOP’s veto petition violates the Maine Constitution, which limits the use of the people’s veto to bills that have not yet gone into effect as law. The law that expands RCV’s use to the presidential election was passed in 2019 and became effective on January 12, 2020.

“Ranked-choice voting for presidential elections is the law of the State of Maine, and the use of the veto petition to repeal this law is unconstitutional,” said plaintiff Clare Payne.

RCV Maine further contends that the Maine GOP and RCV opponents have been given an inappropriate amount of time to collect signatures for their people’s veto campaign. Advocates of RCV were restricted to deadline limits as established in state law during one of the most brutally cold winters on record. Despite the odds and circumstances, they managed to reach the signature goal just in the nick of time.

“Two years ago, during one of the coldest winters in decades, I stood outside in subzero temperatures along with Republicans, Democrats and independents across Maine. Together, we collected more than 80,000 signatures in just 88 days for the veto petition that protected ranked-choice voting,”  said Payne.

Maine voters cast a ballot not just once, but twice in support of ranked choice voting. Yet, at every step in the advancement of this alternative voting method, it has gotten pushback from some state politicians and the state Republican Party.

RCV Maine says that no matter what, it will always defend the integrity of Maine elections, the rule of law, and champion more choice for voters. Stay tuned for more developments in this story.

What Would A Justin Amash Presidential Campaign Mean for the Pro-Voter Reform Movements?

US Rep. Justin Amash (I-Mich.) has a storied history as a political outsider in Washington. Although he long ran with an “R” next to his name, he often bucked the establishment and party line on issues such as spending, war, government surveillance, marijuana legalization, and more.

Now, some are wondering if Amash will carry this rebellious streak into the 2020 presidential election and run outside the two major parties.

Here is a little background:

Justin Amash was the only Republican in the House to come out in favor of impeaching President Donald Trump. In fact, he had established a reputation under the Trump administration as one of the few Republicans to consistently speak out against the president.

Amash’s support for impeachment drew the ire of the caucus in which he was once a prominent figure: The House Freedom Caucus. It was a decision that also put a major target on his back.

On the Republican side, the party would no doubt run well-funded challengers to oust him in the primary. On the other side, Democrats saw an opportunity to flip his seat. So, Amash was feeling pressure from both parties to get out of Congress.

Amash dropped the GOP party label in July 2019, and declared himself an independent, which made his path to reelection much more challenging under the current system that emphasizes a limited choice for voters: red or blue, Republican or Democrat.

However, Amash may have other plans. He announced in April that he stopped actively campaigning for re-election in February. Instead, he is considering jumping into the 2020 presidential race as a libertarian.

A third party contender that has built the public profile that Amash has could shake up the presidential race -- drawing votes from both sides of the aisle and bringing in independents. However, this means he would immediately be scapegoated as a spoiler and no matter the outcome, he would be blamed.

Kurt Couchman, who used to work in Amash’s Washington DC office, penned an op-ed for CNN.com in July 2019, in which he wrote about how Amash could change the electoral landscape in 2020. However, he also noted that to avoid the spoiler effect, presidential elections needed a reform like ranked choice voting.

“To ensure that the ultimate victor has a mandate…Congress and the States should enact ranked-choice voting without delay,” he wrote. “The stakes for 2020 are incredibly high, and the American people need clear outcomes.”

It isn’t just the choose-one voting method most Americans use though that would be brought front and center should he run.

Amash would also raise awareness to the fact that:

A high-profile independent or third party presidential campaign, whether people support it or not,  would provide pro-voter reformers further evidence why the US desperately needs to rethink its political system and transform its electoral process nationwide.

It could build on the tremendous momentum the reform community continues to see.

For the first time in history, STAR (Score the Automatic Runoff) voting will be used in a binding election. The Independent Party of Oregon (IPO), conducting its own primary in 2020, will use the new voting method for president and other state offices.

What is STAR voting? Think about how consumers rate products on Amazon. They give the product a rating between 0 and 5 stars, which indicates not only whether or not they recommend the product, but to what degree they like or dislike it.

That is essentially how STAR voting works. Voters rate each candidate on a scale of 0-5 stars and then the winner is the majority favorite between the top two candidates.

Mark Frohnmayer, founder of the Equal Vote Coalition, praised the IPO for its decision.

“What this represents is the removal of that final obstacle to getting STAR voting implemented in a lot of different places, and that is someone has to do it first,” he said.

The Equal Vote Coalition ran a campaign to get STAR voting implemented in Lane County, Oregon, in 2018. The initiative barely failed. However, Frohnmayer says he and his group didn’t let it slow them down:

“One of the main obstacles to any new reform is that it has not been enacted. Having this opportunity to have STAR voting in a real election with real results, including the presidential preference election, is a big deal.”

The IPO, which endorsed the Lane County initiative in 2018, made the decision to go with STAR voting in their elections in early April, and have combined it with an open system where independent voters and registered party members can participate.

"We are thrilled to be the first organization to conduct a binding election using STAR Voting," said Independent Party Co-Chair Rob Harris.

"Our hope is to use our election to show voters that how we vote in America is not set in stone. It is a matter of choice. The current system has led to a divided and dysfunctional government. We would like to show people that other, better, options are available."

Oregon has a closed primary system. However, state law gives recognized major parties the option to allow registered unaffiliated voters to request a party’s primary ballot. The Republican and Democratic Parties, however, have long locked out these voters.

That leaves hundreds of thousands of voters -- the second largest voting bloc in the state -- left out the taxpayer-funded primary process.

Frohnmayer says the IPO’s continued inclusion of independent voters combined with STAR voting gives voters outside the major parties “a fantastic choice” in 2020. The party’s ballot will include candidates across parties and political ideologies for president and other state offices.

The party will use the state’s registered voter data file to ensure that voters receive a party ballot and will conduct a digital audit to verify the authenticity of the results. Voters who wish to participate in the primary will receive the ballot online, and can submit it between April 28 and May 12.

Frohnmayer says on top of its use in the 2020 IPO primary, the Equal Coalition is trying to get STAR voting on the ballot in Eugene, Lane County, and Troutdale.

Have any thoughts on how the Coronavirus has exposed the weaknesses of the US political and electoral systems? Or, how the pandemic is affecting the 2020 presidential race? Maybe you are interested in building the strength of independent voters in the coming years.

A new survey. Confronting a New Reality: Independents Speak Out, wants to know how independent voters view their status in one of the most concerning times in modern US history.

“We're living through unprecedented time right now,” says Tiani Coleman, president of New Hampshire Independent Voters. “But, one thing that remains the same is the growing commitment of independent voters around the country to move beyond partisanship and make real changes.”

Coleman is spearheading the survey along with Utah League of Independent Voters leader Randy Miller. IndependentVoting.org is providing technical and political support to get the survey out to as many independent voters as possible. .

“It is always a good and timely time to be an independent,” says Miller, “and it is even more satisfying to be a part of the reform movement -- challenging the old, ineffective ways of doing things in American politics.”

Questions in the survey include what impact independent voters think the COVID-19 pandemic has had on partisanship in America, how independents view the timeliness of the government’s response, what their biggest regrets are about the 2020 presidential election, and where they think the country should move going forward.

“There are so many people who feel that they are not well served by the current political process and we want to make sure they have an opportunity to have their say and determine a road forward,” says Miller.

Independent voters are encouraged not only to take the survey, but to share it with other voters they know, and promote the survey on their social media feeds or by writing a letter to the editor or op-ed for an online news source or their local newspaper.