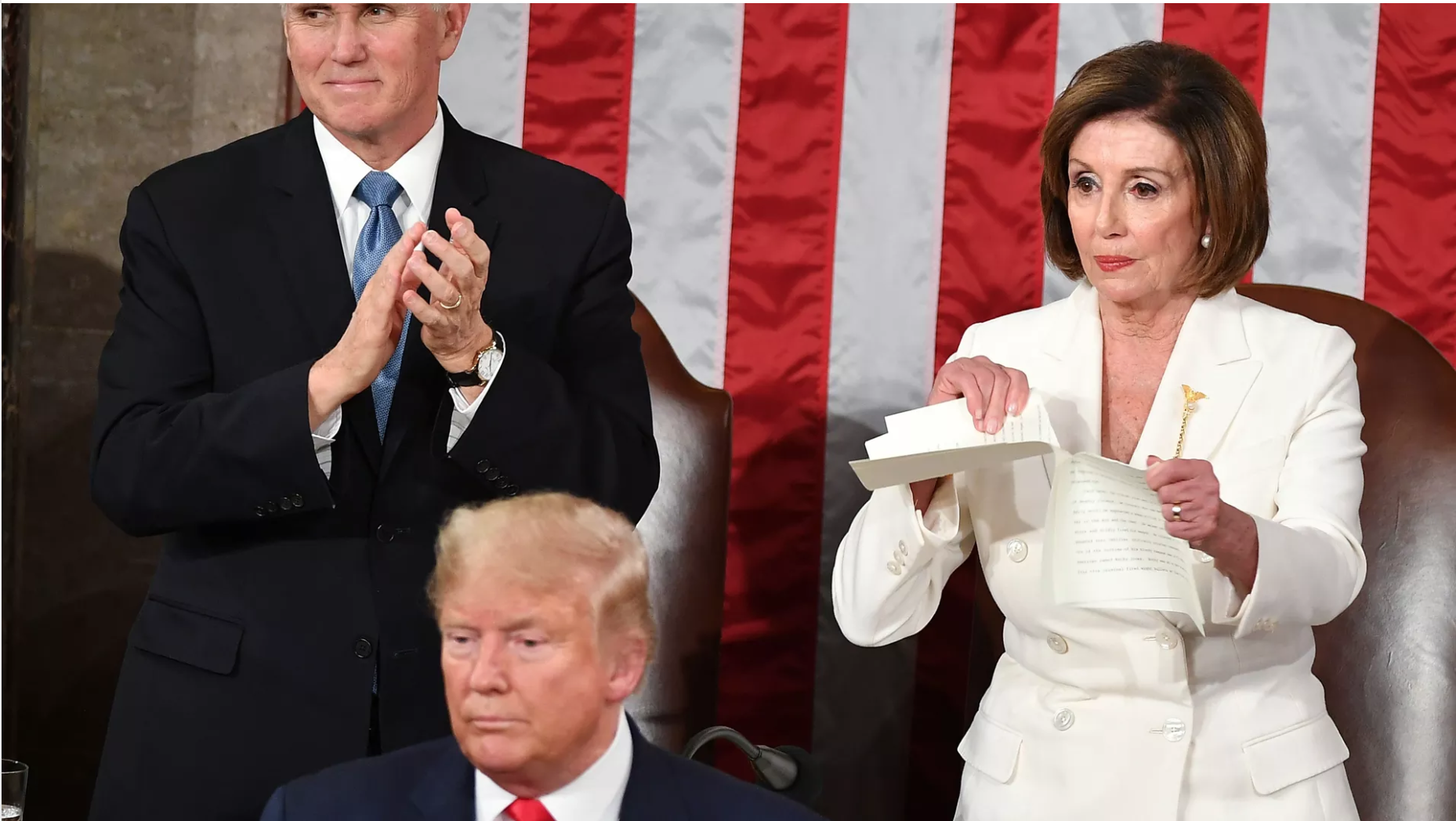 The Independent State of the Union

Donald Trump's third State of the Union Address was-- exactly like every other SOTU address any of us has ever seen in our lifetimes.

Okay, maybe not exactly like every other State of the Union. The president is still-- well-- Donald Trump. And this address was to a Congress that just impeached him. So there was a little bit of nervous energy. All eyes were on Nancy Pelosi, as she sat behind Trump during the address.

She extended her hand for Trump to shake as he handed her a transcript of the speech, and Trump declined to shake hands with her. Which is understandable. And not too uncouth.

But what Pelosi did after the speech, rip up the transcript as the chamber applauded, was petty and childish. It really set House Democrats back after they dressed up the impeachment in such serious overtones. Then their leader to pulls such an immature and impulsive stunt.

Other than that, we saw what we see every year, a predictable partisan dance.

The State of The Union, More Partisan Theatre

The State of the Union Address is yet another Constitutional mechanism of government that has been appropriated by the two party system for partisan purposes (like impeachment).
‍
The modern, televised SOTU Address as we know it hangs its hat on Article II, Section 3, which requires the president of the United States to periodically:

give to the Congress Information of the State of the Union, and recommend to their Consideration such measures as he shall judge necessary and expedient.

For the first hundred years of U.S. history, the president fulfilled this Constitutional function by sending them reports and recommendations in writing. But in 1913, President Woodrow Wilson started the practice of giving an address to Congress in person as a way to use the power of the "bully pulpit" as president and rally support for the White House's agenda.

By the time radio and television reached mass adoption in the U.S., the State of the Union had evolved into the modern event of partisan pageantry we for some reason watch every year.

Same Song and Dance Every Year

The added salt of a recent impeachment and looming acquittal gave this year's SOTU some flavor, but it was still as bland and predictable as all forms of partisan activity.

The president stood up in front of Congress and the viewing public, and listed off all the good things that are happening in the country right now, and gave himself and his party most of the credit for it. Members of Congress who belong to the president's party clapped the entire time and gave standing ovation after standing ovation to Donald Trump's every utterance.

Meanwhile, the party opposed to the president, of course, kept their seats, stared blankly into space, chattered distractedly to each other, shuffled papers, and rolled their eyes.

At last year's State of the Union Address, Rep. Alexandria Ocasio-Cortez looked like she was being held hostage against her will, Sen. Kamala Harris rolled her eyes, and Speaker Nancy Pelosi gave what was perhaps the most epicly condescending clap ever recorded on video.

This year, Ocasio-Cortez tweeted she would boycott the State of the Union altogether:

"After much deliberation, I have decided that I will not use my presence at a state ceremony to normalize Trump’s lawless conduct & subversion of the Constitution.

None of this is normal, and I will not legitimize it.

Consequently, I will not be attending the State of the Union."

When Obama was president, Republicans gave him the same cold treatment. But during one of his State of the Union addresses they did clap when he said "I have no more campaigns to run."

House Democrats did give Donald Trump a standing ovation in 2019 when he touted the growing number of women in the work force, and the most women in any U.S. Congress:

The Most Independent Reactions of All

But the most independent reactions in the room with the president during State of the Union Addresses come from those branches of government which are non-partisan and non-political. Every year the U.S. Supreme Court justices in attendance at the SOTU give no reaction, positive or negative, to the president's statements. And neither do the Joint Chiefs of Staff:

How Independents Feel About The State of the Union

Independent voters are hardly a monolithic group. In fact, they're kind of anti-monolithic by definition. So it's impossible to speak for all of them on any matter. But Donald Trump's approval rating among independent voters has shot up to 42% in the latest Gallup poll.

That's still a majority of independents who don't approve of Donald Trump's performance as president, but it's a sharp upward trend, and part of why this poll clocked his highest job approval rating ever, his personal best of 49%. A majority of independent voters also want to see the Republicans retain control of the Senate in 2020. 54% of independent voters responding to a survey by The Hill released Tuesday say they favor the Senate GOP staying in power, while 46% say they want Democrats to win back control of the upper house of Congress.

Overall, it seems they're happy with a strong economy, consistently solid job growth, unemployment remaining pinned to record lows, and a relatively stable administration. In his State of the Union, Donald Trump addressed economic issues like the Phase 1 Trade Deal with China, and the United States-Mexico-Canada Agreement, recently approved by House Democrats.

The State of The Independent Union

As for the state of the independent union-- it faces the same threats it has faced down for decades. There is certainly a "self-fulfilling prophecy" of voters picking the candidate they think is most viable over the one they actually want to win, an attitude and voting pattern that is actually partially responsible for making their favored candidate less viable.

Last year The Hill found in survey research that a whopping 65% of registered Democrats and independents who lean Democrat say they're more interested in a candidate who can beat Trump than one who agrees with them on their top policy issue. That says a lot about how far we've elevated parties and personalities above policy in the country today.