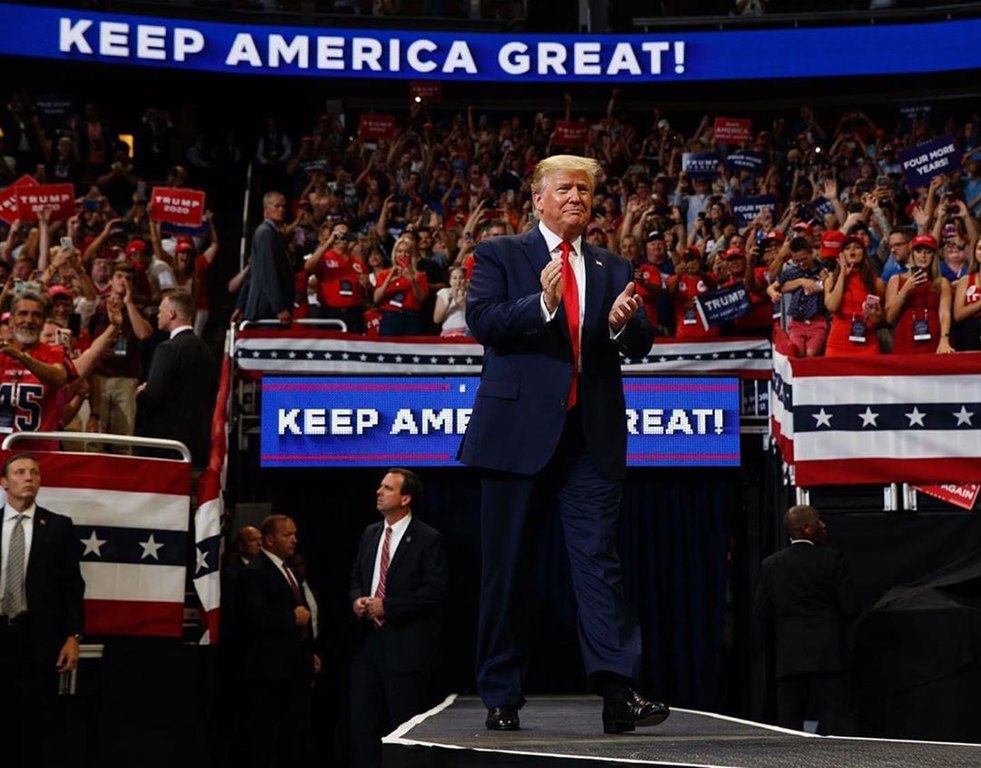 In case you hadn’t heard, COVID-19 has disrupted the economy perhaps more than any other singular event in history. Here are three metrics to get a sense of the damage.

One can only imagine COVID-19 will also massively disrupt our politics as well in the 2020 election. Some are reckoning that Donald Trump will be more likely to lose because of the pandemic.

But here are three reasons COVID-19 could help Trump get reelected.

1. The economy was primed for a recession before coronavirus. That would have devastated Donald Trump in the election after hanging his hat on the strength of the economy and stock market. But now he has a very plausible excuse.

Donald Trump has made the strength of the economy a major selling point for reelecting him. He bragged about the stock market’s euphoric bull run in a very loud tweet Jan 9:

A crash this devastating could have easily dashed his reelection chances, but voters are likely to be more forgiving because they have COVID-19 to blame instead of Donald Trump.

So this pandemic has given the president a plausible excuse for a recession that was likely to happen anyway. If it had happened without COVID-19, he would have been more likely to lose.

And there are plenty of good reasons to believe the recession would have happened anyway. Many business executives and analysts were predicting it. In fact, it’s staggering how many business people were sure a recession was inevitable before coronavirus entered the calculus.‍

Deloitte's Q4 2019 Signals survey found a nearly unanimous 97% of CFOs believed we were going to enter a recession in 2020 or were already in one.

As the U.S. entered the new decade, the Buffett Indicator-- the total value of all U.S. stocks divided by GPD, a measure of how high stocks are priced relative to the underlying productivity of the economy-- stood at a record high above previous peaks before the 2000 and 2008 recessions.

It would almost certainly not have been this severe without COVID-19 shutting the world down. But it still could easily have created a major disadvantage for Donald Trump. Now because of the coronavirus, he may have completely dodged that disadvantage going into November.‍

2. If coronavirus is still spreading, people may be more likely to stay home. Low voter turnout typically favors both incumbents and Republicans.‍

Global coronavirus infections surpassed 1 million at the beginning of April. The pandemic will most likely still be spreading by November. In fact, that’s when a second wave is expected to hit.

The Director of the U.S. Centers for Disease Control and Prevention (CDC), Dr. Robert Redfield recently told an NPR affiliate that a second wave of coronavirus will spread over the United States by late fall and threaten a substantial portion of the population. He said the CDC is preparing for: “another wave that we would anticipate in the late fall, early winter where there will still be a substantial portion of Americans that are susceptible.”

If that happens it could drastically curtail voter turnout. Trevor Potter, a former chairman of the Federal Elections Commission recently warned: “There's a real possibility that people will be afraid to vote on Election Day and won't have alternatives. That's just unacceptable for the world's leading democracy."

Primary states are struggling to staff Democratic primary elections because poll workers fear for their health and safety as coronavirus continues to spread and death tolls mount. That includes Wisconsin, Florida, and Maryland, which is the fifth state to postpone its primary.

Low voter turnout is historically a headwind for Democratic candidates, and candidates challenging incumbents. It tends to swing elections toward the Republican and incumbent. Of course in the U.S. presidential race, Donald Trump is both, and low voter turnout could help him in November.‍

Voter turnout in 2016 was the lowest since Bob Dole ran against Bill Clinton in 1996. That may have had something to do with Donald Trump’s victory in key swing states.

Whether low voter turnout really helps incumbents is the subject of some controversy, with proponents of each side pointing to different data sets. But a comprehensive study of 4,000 city elections found that at least in local elections, lower turnout correlates with higher incumbency. Elections watchers have long observed a correlation between low voter turnout and Republican victories. Republicans even have a slight advantage on rainy election days, because the weather keeps some people home and slightly suppresses voter turnout.

But to safeguard the integrity of our democratic form of government, there should be a concerted effort to make sure no one sits out the 2020 election because there’s a realistic possibility that they might contract a deadly disease and get seriously ill or even die.

Voting from home is one possible solution. Mail-in voting is already used in all 50 states for absentee ballots. Colorado, Washington State, and Oregon have all mail voting. But many other states lack the infrastructure for statewide mail-in voting, and would have to rush to assemble it on the fly, with skeleton crews as people stay home to flatten the COVID-19 curve.

‍
Actress and spokesperson for Unrig The System and RepresentUS, Jennifer Lawrence has spoken out to rally activists to support a vote at home initiative by the 2020 election.

President Donald Trump has opposed mail in voting, citing voter fraud as a concern: “No, because I think a lot of people cheat with mail-in voting. I think people should vote with ID, voter ID. I think voter ID is very important, and the reason they don’t want voter ID is because they intend to cheat."

In 2006 the Government Accountability Office conducted a review of the literature on voter fraud, and interviewed the experts who conducted the studies, concluding:“absentee balloting is subject to the greatest proportion of fraudulent acts, followed by vote buying and voter registration fraud.”

But the Brennan Center for Justice says voter fraud is still extraordinarily rare:“There have been a handful of substantiated cases of individual ineligible voters attempting to defraud the election system. But by any measure, voter fraud is extraordinarily rare.In part, this is because fraud by individual voters is a singularly foolish and ineffective way to attempt to win an election. Each act of voter fraud in connection with a federal election risks five years in prison and a $10,000 fine, in addition to any state penalties.”‍

3. Finally, there are a number of scientific studies that have found conservatism as a political ideology maps directly on the human disgust response and fear of disease.‍

There is a fascinating body of research into the origin of political alignments that suggests conservative and liberal political dispositions arise from differing personality traits. In short, conservatives rank high in Big Five personality trait Conscientiousness. Conscientious people are organized and cautious. They are more likely to be middle managers of companies.

Meanwhile liberals rank high in Big Five trait Openness. Open people are creative and spontaneous.  They are more likely to be artists or entrepreneurs that start companies.

Researchers have mapped the conservative temperament onto the disgust response, an ancient adaptation that helps keep us safe from potentially dangerous contagions-- like coronavirus.‍

Conservatives tend to have a lower threshold to feel disgust. That sense of revulsion at messes, disorderliness, and chaos may animate their choice of vocations that require consistency, planning, organization, and efficiency-- and their political support for law and order, stark definitions (of marriage or gender for instance), and even strong borders between nations.

Strangely enough researchers have been able to make people temporarily give more conservative answers on questionnaires by having them fill them out next to a bottle of hand sanitizer.

Indeed fear and anxiety tend to drive conservative political outlooks. This is not intended here as a critique of conservatism. There’s a good reason people feel fear and anxiety. These are highly adaptive systems that still serve us in our relatively safe modern world. Because the world still isn’t safe despite our best efforts to make it safe as possible. It’s full of dangers not to be naive of. We all got that wake up call in September 2001, and again with COVID-19.

A worldwide disease outbreak could have the propensity to shift American society’s net personality and political temperament in a more conservative direction, giving Trump a boost in November.

By the way-- political liberalism and trait Openness map onto the human exploratory response. Conservatism keeps you more safe when there are dangers. But liberalism helps you progress when there are opportunities. And sometimes doing what you've been doing when the world changes isn't safe, so liberalism has a role to play in keeping us safe. Just like conservatism maintains the stability that allows us the privilege to be creative and innovate and progress..

So both personality types, and their political manifestations, are vitally necessary for our society to survive and take survival to the next level and thrive. Demonizing the other, the current modality of our partisan politics, does not take into account how necessary both sides are. We should discuss and debate fiercely to share our perspectives and expose each others blind spots.

But we should do so with love in our hearts for “the other” side of the argument, and remember we’re all in this society together and our unity is the source of our strength. Out of the many one, admonish our nation’s founders in Latin on the Great Seal of the United States. We are pathologizing ourselves and our society to turn it into a war by all but violent means.

I fear that this level of partisan animosity will endanger us of a violent war if we are not careful to regard each other as dearly beloved friends who are negotiating our society together, not enemies at war over society. Surely a deadly disease pandemic like COVID-19, which has no regard for any of us, should remind us all again of our essential equality as tragically vibrant, because mortal, and therefore unutterably precious human beings making our way briefly through this life together.