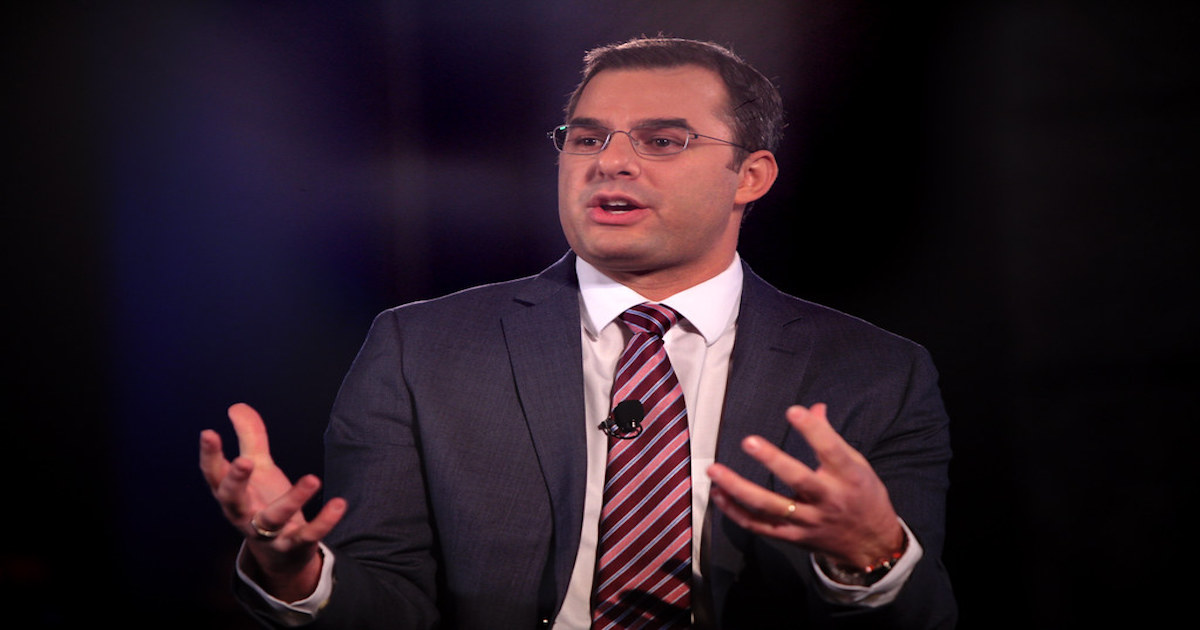 Opinion: Justin Amash Is The Adult They Won't Let On The Debate Stage

No sooner than U.S. Congressman Justin Amash (I-MI) announced his exploratory committee to run for president, did members on both sides of the partisan divide react with horror.

His announcement unleashed a flood of tweets from both Republicans and Democrats worried that he would "spoil" the election for their candidate.

The limited government, constitutionalist Justin Amash officially changed his affiliation to the Libertarian Party on Friday, making him history's first ever Libertarian in the U.S. Congress.

If he runs for president in November, it will be on the Libertarian Party ticket.‍

Usually Libertarians cull some votes from Republicans, while the Green Party pulls from Democrats. Though in some cases, Libertarians who emphasize aspects of the LP platform that appeal to the left have likely swayed the election in favor of the Republican.

Still, it's hard to imagine Justin Amash would draw any left-of-center votes away from Joe Biden. The strict constitutionalist is a staunch opponent of expanding the social welfare programs that many on the left, especially its heterodox wing of Bernie Sanders supporters, strongly support.

The more likely danger to Joe Biden of a Justin Amash campaign would be right-of-center independent voters and Republican never-Trumpers.

But outside some intensely anti-Trump Republicans like former congressman Joe Walsh, these groups weren't likely to hold their nose and pull the lever for Joe Biden anyways.

I'm an independent voter, small "L" libertarian, who believes in limited government, individual freedom, and market capitalism. I've written hundreds of thousands of words in criticism of Republicans in my career as a journalist.

So I'm not speaking as a Republican partisan at all when I say that Democrats have come unglued during the Trump era. As soon as he won the election they have been so mindlessly anti-Trump that they've lost their political bearings (and maybe some of their moral compass too).

The intense fear that Justin Amash will take votes away from Joe Biden shows that many on the left are still not thinking clearly. They view Justin Amash as a spoiler for Joe Biden because they see Amash in the terms of Trump like they see everything else now.

They don't see a former Republican, conservative-minded, anti-welfare state, radically limited government candidate who would be most likely to take votes away from the Republican in the race. Who knows, they might even think he's progressive simply because he was anti-Trump and supported impeachment. And today that's what it means to be a progressive for many.

Anti-Trumpism has become the other side of the same coin as Trumpism.

Having enemies like that has made the Donald a lot of friends.

But seeking the Libertarian Party's nomination to run for president should have been a loud and clear signal for Democrats to cheer Amash on so the "spoiler effect" could work for them. Should have been loud and clear, unless you can't hear over the deafening roar of anti-Trumpism.

But here's why they won't let Justin Amash on the debate stage with Trump and Biden...

American voters often pick the president who remedies the deficiencies they saw in the previous president. The tough, confident Ronald Reagan was the remedy to a Jimmy Carter voters found too weak and ineffective.

George H. W. Bush road his coattails to office after his second term, but was also an intellectual to remedy Reagan's perceived shallowness and lack of substance, all charm and smile and platitudes. The incredibly warm-blooded Bill Clinton from a poor southern state remedied Bush's perceived coldness and elitism.

The humble, evangelical Christian George W. Bush remedied the perception of Bill Clinton as a jerk. And seemed like a guy who would never cheat on his wife with an intern in the Oval Office. Barack Obama was a great public speaker and another intellectual life line to voters weary of a president they might have a beer with, but worried might just not be bright enough to decide nuclear policy.

And that brings us to Donald Trump, an uncensored overflow of everything bubbling under in the American Id, to remedy the perhaps too-coldly logical Superego that was Barack Obama. The problem is many Americans are already missing having "an adult" in charge. When things got a little too real with the coronavirus, many started missing an adult in the room even more.

Democrats made it clear in the primary that they were out to nominate the candidate with the best chance of beating Trump over one who aligned most with their political views:

"A majority of voters who identify as Democrats and Democratic-leaning independents say they would want the party's nominee to be someone who has the best chance of defeating President Trump rather than one who most closely aligns with them on the issues, a new poll has found."

In that, they made a major miscalculation by nominating Joe Biden. Their constant drumbeat of opposition to Trump has hinged on three points: 1) He's a self-admitted molestor with those Billy Bush hot mic comments and payoffs to S. Daniels; 2) He's racist with every other word he utters and his immigration policy; 3) He's corrupt with Russia and Ukraine.

In the person of Joe Biden, the party that has been saying these things ceaselessly in criticism of Donald Trump since 2016 has managed to nominate someone: 1) with an endless clip reel of inappropriately putting his hands on visibly uncomfortable women, not to mention a credible sexual assault allegation now; 2) an author of the crime bill that disproportionately incarcerated people of color; 3) and who has his own at-best bad optics when it comes to corruption.

And as far as getting "an adult" in the Oval Office goes, Joe Biden is also the Democratic version of Trump. We've known since before he was vice president that Joe Biden has a rash, impulsive temperament, and says wild things that might be unseemly for the presidency. He has none of the even-keeled and diplomatic character that Americans would find a remedy to Trump.

Justin Amash Would Crush The Two Party Candidates in A Debate

Enter Justin Amash. While Donald Trump and Joe Biden are eerily similar in every way that Trump's opponents have made an issue of during his term as president, Justin Amash couldn't be more different than the two "choices" the two party system will put up for consideration this year.

Thoughtful and intellectual are not terms that would be used to describe Trump or Biden. But agree with his policy positions or not, Justin Amash has policy positions, they're clear, he reasoned his way to them through erudite understand of law and history, and his positions have remained consistent throughout the young congressman's remarkably successful career.

He's unwavering in his policy positions because they aren't expedient stances for winning an election, currying favor with lobbyists, or making nice with this former party in Congress so he could win allies and quickly move up the ladder to sweeter committee assignments.

No, Justin Amash is an inveterate intellectual and statesman. The policies he advocates come from the principles of sound government that Amash holds, mainly the principles of the Founders and political architects of our society and system of government. Sure, every politician pays lip service to them, but Justin Amash really means it, and votes like it too, even if he votes alone.

To give you an idea of how grounded Justin Amash and his statecraft are: He posts every vote he makes to Facebook, explains why he voted the way he did, and answers constituents' questions. He's been doing that since he was in the Michigan Statehouse, and still does in the U.S. Capitol.‍

The level of substance he'd bring to bear on the debate stage would cut through Trump and Biden's flamboyant, blustery rhetoric like a hot knife through butter. Standing next to those to brutes slugging it out, he would appear imminently more presidential, the grown up many Americans would like to see in charge during these uncertain and troubling times.

But don't expect to see Justin Amash sharing the stage with Donald Trump and Joe Biden. The Commission on Presidential Debates is rigged to keep third party and independent candidates out. Letting Ross Perot on the stage in 1992 actually gave voters a chance to get to know him, and consider a choice other than a Democrat or Republican. They don't want to make that mistake again.