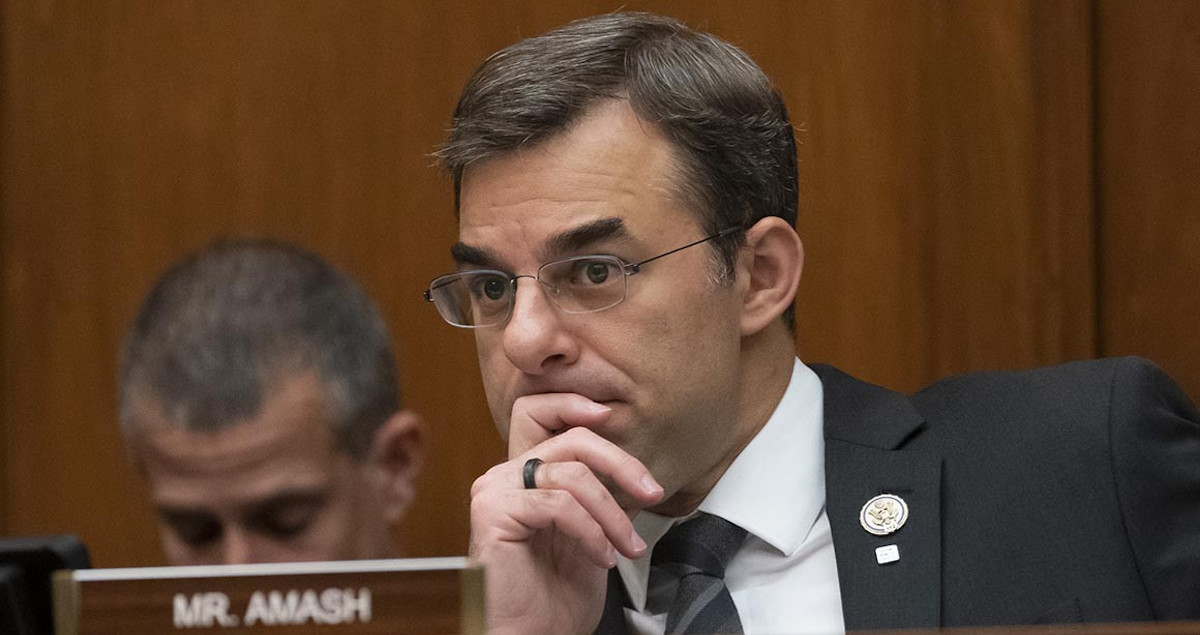 It came as no surprise that not long after US Rep. Justin Amash announced his Libertarian bid for president, both major parties took aim at him.

“And those millions of Americans deserve a choice on the ballot. And it's pretty silly to say, well, we shouldn't allow another candidate to be on the ballot.”

However, President Trump mocked Amash, saying he likes him “even more than Jill Stein.” Meanwhile former Democratic US Sen. Claire McCaskill ridiculed his campaign, saying every anti-Trump vote needed to go to Biden.

To specifically quote McCaskill, “This is no time for a Ross Perot, or a Jill Stein, or a Ralph Nader.”

Sound familiar? That is because the rank and file of the major parties say that every presidential election. We cannot afford to have a third party candidate, they argue, because the outcome will be that the other side wins -- and then there goes the country we all know and love.

Amash is already being labeled a spoiler in the 2020 election, and he just barely launched his campaign’s website. And as much as third party and independent candidates try to escape this stigma, it is a reality under the electoral infrastructure in place in most states.

The current system blocks meaningful competition at every level. Whenever there are more than two candidates in a presidential election, as FairVote CEO Rob Richie says, “our prevailing voting systems break down.”

However, for pro-voter reformers like Richie, Amash’s candidacy underscores the need for broad systemic changes in the way we conduct elections, such as widespread implementation of Maine’s ranked choice voting system.

“The White House shouldn’t be won based on how the majority splits its vote, and voters should never have to choose between the candidate they think will win and the one that they want to win. Instead, ranked choice voting ensures that our elected officials more accurately reflect their constituents.”

A reform like ranked choice voting would allow voters to rank candidates in order of preference. If no candidate garners a majority of the vote, the backup preference of voters who cast a ballot for the last place candidate will be re-distributed until a single candidate has a majority.

FairVote, the nation’s preeminent advocate for ranked choice voting, is not the only organization pushing for a better alternative to the choose-one method that leaves millions of voters unheard in the democratic process.

The Center for Election Science, for instance, advocates for approval voting, which would allow voters to choose as many candidates as they want on the ballot:

There are many 3rd parties w/ new ideas, but little chance of breaking thru the 2 party system because they get labeled as fringe & blamed for "spoiling" elections. #ApprovalVoting fixes that by ensuring voters can vote for their fav w/out splitting vote https://t.co/AOb30WPULj pic.twitter.com/GTDnE4YE7p

Then, there is the Equal Vote Coalition, which advocates for STAR (Score Then Automatic Runoff) voting. Voters rate each candidate on a scale of 0-5 stars, and among the top two scoring candidates, the one preferred by the most voters wins. STAR voting will be used for the first time in a binding election in the Independent Party of Oregon’s 2020 primary in May.

Advocates of all these systems, though they disagree on the end-solution, understand that the choose-one voting method has failed to ensure accountability, fairness, and meaningful representation in elections. Outside candidates like Justin Amash simply pile onto the mountain of evidence that the two-party duopoly is failing US voters.

And it isn’t just how Americans vote:

And this just barely scratches the surface. However, these issues and more come to the forefront of the conversation when a prominent third party or independent candidate like Amash enters the presidential election

The opportunity for reformers is that their movements become even more relevant:

The parties, their pundits, and talking heads may say now is not the time for a third party candidate to enter the presidential race, but that script will never change. It will always be a zero-sum game where the party either wins or everyone loses, and any attempt to add meaningful competition will only jeopardize the country's future even more.

However, the momentum for change has never been stronger. More Americans than ever are part of the growing movements to transform the political process from one that serves a duopoly, to one that serves voters. But these movements need more support to enact lasting change.

Perhaps now more than ever is the time for a candidate outside the Republican and Democratic Parties -- a candidate who may have no shot at winning, but can further highlight all the systemic problems that prevent real competition in US elections.