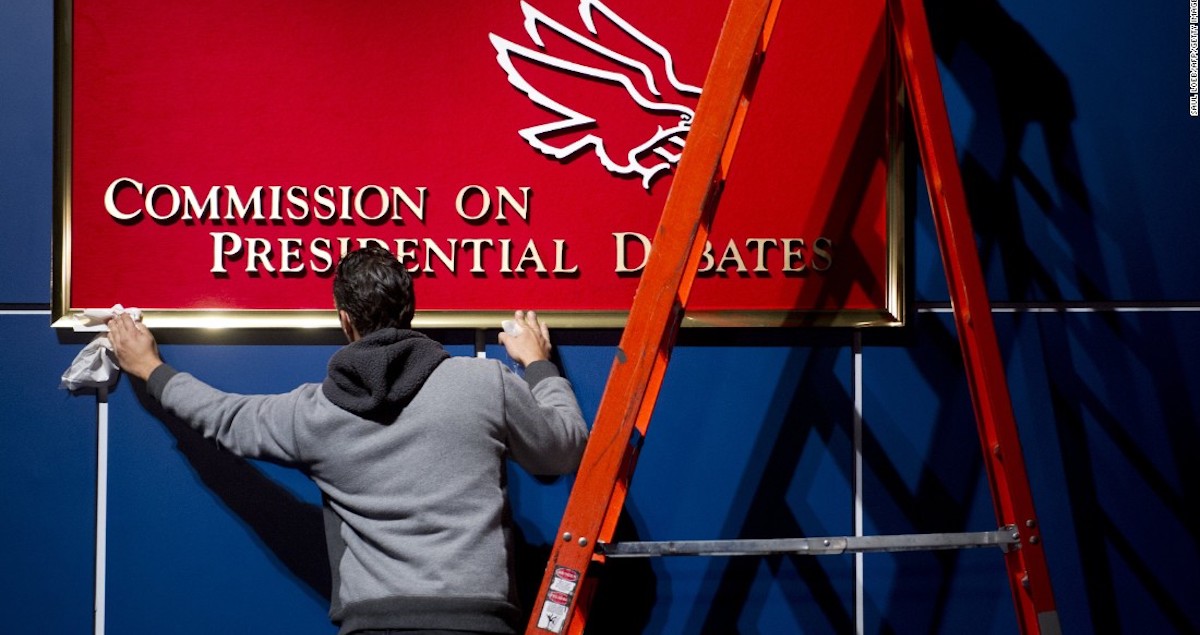 Everything You Need to Know About the Commission on Presidential Debates

The first presidential debate between Joe Biden and Donald Trump is scheduled for Tuesday, September 29, at 9 pm (Eastern). Plenty of commentators, though, have questioned whether either candidate should debate the other from a campaign strategy standpoint.

Others have wondered if a substantive debate on the nation’s most pressing issues is even possible in the current political climate.

Meanwhile, there is a growing contingent of voters and grassroots reform activists who want to see more than two candidates on the debate stage. Public opinion polls consistently show a majority of Americans believe at least one additional candidate should be invited, while trust in the dominant political parties is at all-time lows:

Yet, voters haven’t seen more than two candidates on the debate stage since Ross Perot in 1992. To understand why it is important to know who decides who debates in presidential elections and the history of two-party control over the process.

The Commission’s Takeover of Presidential Debates

The Commission on Presidential Debates decides all the details pertaining to presidential debates, including rules for candidate entry, how many debates will be held, the schedule, the format, etc. The commission has control over the entire process.

But, this wasn’t always the case. In fact, the League of Women Voters served as the principal sponsor of presidential debates from 1976 to 1984 after the nation went 16 years without any debates. However, after the 1984 election cycle, the political parties came together to shift sponsorship of the debates in their favor.

According to the League, the group challenged the bipartisan scheme to take over the debate process. The group argued that handing debates to the parties and their campaigns would deny voters an opportunity to see the candidates outside their controlled campaign environments.

It is an indisputable fact: the debate commission was formed as a partnership between the Republican and Democratic Parties.

The League withdrew its co-sponsorship of the debates in 1988, stating that it had “no intention of becoming an accessory to the hoodwinking of the American public.”

"The League of Women Voters is withdrawing its sponsorship of the presidential debate scheduled for mid-October because the demands of the two campaign organizations would perpetuate a fraud on the American voter," said then League President Nancy M. Neuman.

The Commission on Presidential Debates has had sole control over presidential debates since then.

Public opinion polls suggest that a broad majority of Americans want to see more than a Republican and a Democrat on the presidential debate stage. However, the debate commission has only invited a third candidate to participate once -- Ross Perot in 1992.

The debate between George H.W. Bush, Bill Clinton, and Ross Perot was (at the time) the most watched debate in US history, and Perot went on to be the most successful independent candidate in modern presidential history by garnering 19% of the vote.

Yet, despite running another visible campaign in 1996, Perot was not invited back, and in 2000 the Commission on Presidential Debates instituted new rules for candidate inclusion:

The new rules, specifically the "15% rule" not only made it impossible for Green Party candidate Ralph Nader to be heard on the debate stage in the 2000 presidential election, but Nader was physically barred and threatened with arrest just for attempting to watch the debate in a separate auditorium at the Bush-Gore debate.

Nader had a ticket to be present. But the debate commission had provided security with pictures of third party candidates and their running mates with the instructions that they were not allowed to attend.

This wasn’t the only incident either. In 2012, Green Party candidate Jill Stein and her running mate were arrested for attempting to enter the debate grounds. Is there any doubt that the debate commission is serving the interests of the major parties?

It is an indisputable fact: the debate commission intentionally and forcibly keeps third party and independent candidates away from presidential debates.

Fifteen percent in 5 public opinion polls is a tall order for any third party or independent candidate. It’s a feat that must be accomplished even as pollsters bury their names, the media ignores them, and they have to spend all of their resources just to gain and keep ballot access.

The 15% rule has exacerbated the lack of competition in US elections as many potential independent and third party candidates have cited it as a reason why they won’t run for president, despite viable credentials and experience in public office.

“You have to know you have a viable path into the debates to even attempt to run for president,” said businessman Peter Ackerman, in a former interview for IVN.

The Biggest Lawsuit No One Is Talking About

Ackerman, along with his organization Level the Playing Field and the national Libertarian and Green Parties, filed a lawsuit against the Federal Election Commission (FEC) in 2015, alleging that it acted  “arbitrarily, capriciously, and contrary” to federal law when it ignored administrative complaints that the debate commission violated federal law.

The debate commission is mostly composed of people who have a political and/or financial investment in the success of one of the two major parties. Thus, the commission is not nonpartisan as it claims to be nor does it use “objective criteria” to determine debate eligibility as required by law.

In February 2017, US District Court Judge Tanya Chutkan agreed with plaintiffs that the FEC had “acted arbitrarily and capriciously and contrary to law” in defending the debate commission as nonpartisanship. This marked the first successful challenge to the debate rules.

The fight against the rigged electoral rules that deny voters competitive elections in the US has long been an uphill battle. After all, those who challenge the status quo are challenging rules put in place explicitly to benefit the major parties. The two parties hijacked the presidential debates so they could apply the same control over them they have over every other facet of the electoral process.

Yet, despite setbacks in the courts, advocates for change continue to press the Commission on Presidential Debates to change its rules and bring competitiveness to presidential elections US voters have not seen in modern history.