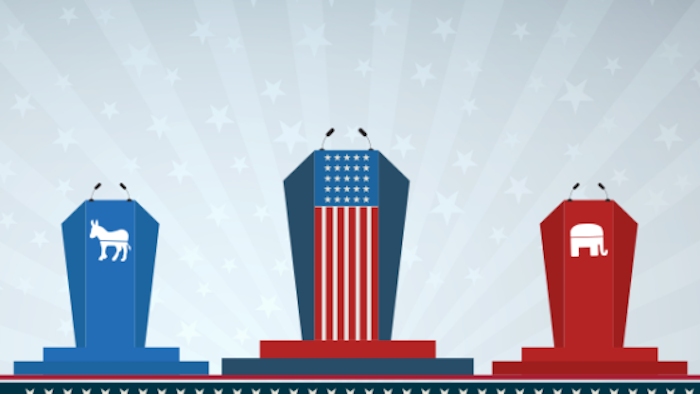 The data is undeniable. You can see it in polls, voter registration statistics, and in most coffee shops. A substantial majority of voters, especially younger ones, want the option of choosing a candidate outside the two-party system.

Running for any office, let alone president, without the institutional support of a major party is difficult. From a primary election season monopolized by the Democratic and Republican parties, to ballot access restrictions, to presidential debate rules, and to the legal laundering of campaign contributions through national, state, and local parties, the competition is unfairly stacked against an independent.

But like in any monopolized industry filled with dissatisfied customers, a new competitor with the right resources can disrupt the entire system.

In the age of Uber, Netflix, and Amazon, the data shows that the time for political disruption might just be ripe.

As the two parties try to prove the other is more evil, the general electorate’s opinion of government has declined to a shocking new low. According to Pew Research, just 20% of Americans now trust the government in Washington, DC.

Voters Believe DC Politicians Are Accountable to Party Leaders, Not Them

Party politics is a clear source of the distrust in DC. As major problems go unsolved like our growing national debt, rising health care costs, and our broken immigration system, 75% of voters believe that politicians are more accountable to their party leaders than they are to their constituents.

Voters Want the Two Major Parties to Work Together

As major problems go unsolved, both parties continue to dig their heels in divisiveness. But this is not what voters want. Contrary to the conventional wisdom from political insiders, a recent NPR/PBS News Hour/Marist poll shows that voters from across the ideological spectrum actually understand and embrace diversity of opinion and the need to reflect that diversity in the challenge of producing public policy.

"75% of voters believe that politicians are more accountable to their party leaders than they are to their constituents."

The inability to say something good about each other, let alone come together for the purpose of solving major problems, makes it virtually impossible for either party to appeal to the vast majority of America. That is one reason why 66% of likely voters say “neither party is really  representing my needs or interests.”

Voters Don't Want To Associate Themselves With The Two Major Parties

Even Republicans and Democrats Want a Third Party

What’s more, even the voters who still consider themselves Democrats or Republicans want a third option. Gallup found that 57% of Americans now believe a “major third party is needed,” including 54% of Democrats and 38% of Republicans. This means that party voters can be poached.

Young Voters Have No Party Loyalty

As for millennial voters, they have little regard for the two-party system at all. According to a 2017 NBC News/GenForward survey, a stunning 71% of these young voters want a viable third option. With the world bringing consumers more choices in every other aspect of their lives, except politics, this means that the trend toward political independence is only getting bigger and faster.

Most people have day jobs, hobbies, life, love, and real problems to solve. But the ideologues in both parties spend their waking hours on philosophical political warfare. That might help explain why an October 2018 study conducted by Hidden Tribes found that the ideological extremes in both parties have successfully hijacked the American political debate.

Today, these two small and narrow ideological tribes dominate the political debate, press, social media, and in turn, public policy. The 86% of America that makes up the “exhausted majority” is silenced, leaving them unrepresented and in search of an alternative.

Can A Candidate Crack The Independent Code?

It could happen in the political industry too.

But it will require a true appreciation that a new base of voters cannot be built by being another ideological champion.

A disruptor will have to maintain participation from a broad spectrum of voters, championing inclusion over exclusion. Open debates. Open elections. And open participation.

A successful disruptor will have to prove that strong principles are not threatened by democracy’s demand for compromise.