Up Next
...
Pandemic Elicits Surge to Save A Democratic Process Already in Crisis
Read More 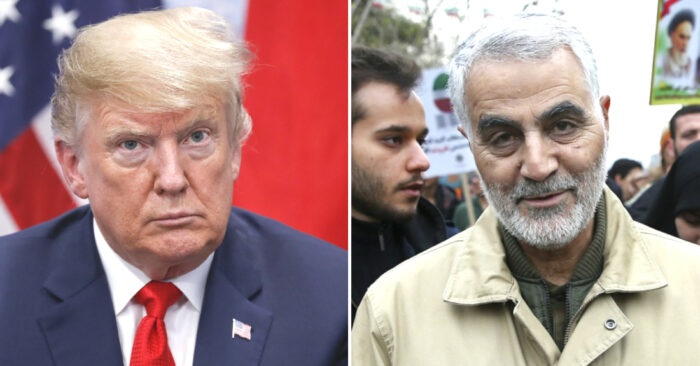 Democrats have been uniform in their condemnation of President Donald Trump after the targeted killing of Qasem Soleimani on Jan 3rd. Speaker Nancy Pelosi called the airstrike on Iran’s top general “provocative and disproportionate,” and a “dangerous escalation.”

“America – and the world – cannot afford to have tensions escalate to the point of no return.”

Senate Minority Leader Chuck Schumer lambasted the killing as characteristic of a “dangerously incompetent,” “erratic, impulsive,” Trump foreign policy. The 2020 Democratic presidential candidates lined up to criticize the White House for the risky strike. Former Vice President Joe Biden likened it to tossing “a stick of dynamite into a tinder box.” Bernie Sanders said the move “brings us closer to another disastrous war.” On MSNBC, Chris Matthews called it an assassination that could pull the US into another Vietnam.

On Monday, Nancy Pelosi announced a war powers resolution that would limit Trump’s ability to take further military action against Iran without explicit congressional authorization. She says the resolution will reassert Congress’ oversight powers when it comes to waging war.

But the new war powers resolution is too little, too late.

While House Democrats focused the entire nation’s attention on impeachment in the final months of 2019, the annual National Defense Authorization Act quietly slipped through the Senate on Dec 17, scrubbed of two House-approved war powers amendments that could have stopped the Iran strike.

Rep. Barbara Lee (D-CA), who cast the only vote against the 2001 Authorization for Use of Military Force (AUMF), amended the NDAA to repeal the AUMF after two decades of war in the Middle East. And Rep. Ro Khanna (D-CA) added an amendment that essentially does what Nancy Pelosi’s new war powers resolution would do. It would have withheld funds for any act of war against Iran without congressional approval.

It's been 19 years since I cast the only vote in Congress against the overly broad AUMF, which gave presidents blank checks for endless war.

As we hurtle toward potential war with Iran, I maintain that force is not the answer. Add your name if you agree. https://t.co/CQXeIVCHfi

The Senate passed the NDAA without either amendment. Amazingly enough, senators like Chuck Schumer, who voted for the NDAA last year are among Trump’s critics for his strike against the Iranian general in Iraq. The day after the House voted to impeach Donald Trump, I wrote to protest that the impeachment proceedings were a brazenly partisan affair. Soon after, I implored IVN readers to remember back to a time not so long ago when politics was about policy, instead of endless fake news gossip columns written to appeal to the narcissism of our ego-invested partisan identities.

The development in the Middle East days later is a teachable moment in this regard. Think of all the attention Pelosi and Democratic leaders focused -- and wasted-- on the impeachment bridge to nowhere. They knew that Trump wouldn’t be removed from office in a Senate trial.

To meet the 66 senator threshold, it would take 20 Republicans to wittingly vote to decapitate their own party. The House Democrats burnt up all that political capital and so much of the nation’s attention just so they could get an asterisk on Trump's Wikipedia page that says he's been impeached, with no real world impact.

This is the legacy of a truly irrelevant Congress that puts the dramatic appearance of opposition to the president in our reality television show era of politics above substantive policies that would do something to actually reign in the president’s power. They sure have earned the president’s scornful moniker, “Do Nothing Democrats.”

Don’t misunderstand me. I’m not even taking a position on the Soleimani airstrike in this article. I’m not remarking here on whether it was strategically advisable, or whether it was constitutionally sound. I’m not myself making the argument here that the president has become an unwieldy executive, exercising over-broad command over the military without enough congressional oversight. I’m just pointing out that’s what Democrats have been saying about him all along, but they obviously didn’t mean it. It was just another way to partisan.

And if Democrats cared about policy more than partisanship, they could have actually constitutionally checked Donald Trump’s power, by focusing all that attention on their NDAA amendments and rallying the public to call their senators.

The Democratic base obviously has a lot of energy to oppose Trump. If party leadership was more interested in good policy and wise statecraft than they apparently are in partisan showboating, they might have harnessed that energy into a movement for meaningful, incremental policy progress. But these are many of the same leaders who stood by and supported President Obama’s own expansion of the president’s war powers. The entire legal rationale for “targeted killings,” and the term itself, are a legacy of the Obama administration.

I’m addressing the strike against Soleimani here, and presidential war powers, but this is just one example to make a point about partisanship and policy. You can pick a number of other important issues and see the same pattern emerge. If American voters want to see their lawmakers reform public policy to reflect their will and make the world a better place -- in whatever way the voter defines that -- we have to actively resist and let go of this partisanship and refocus the conversation on policy.