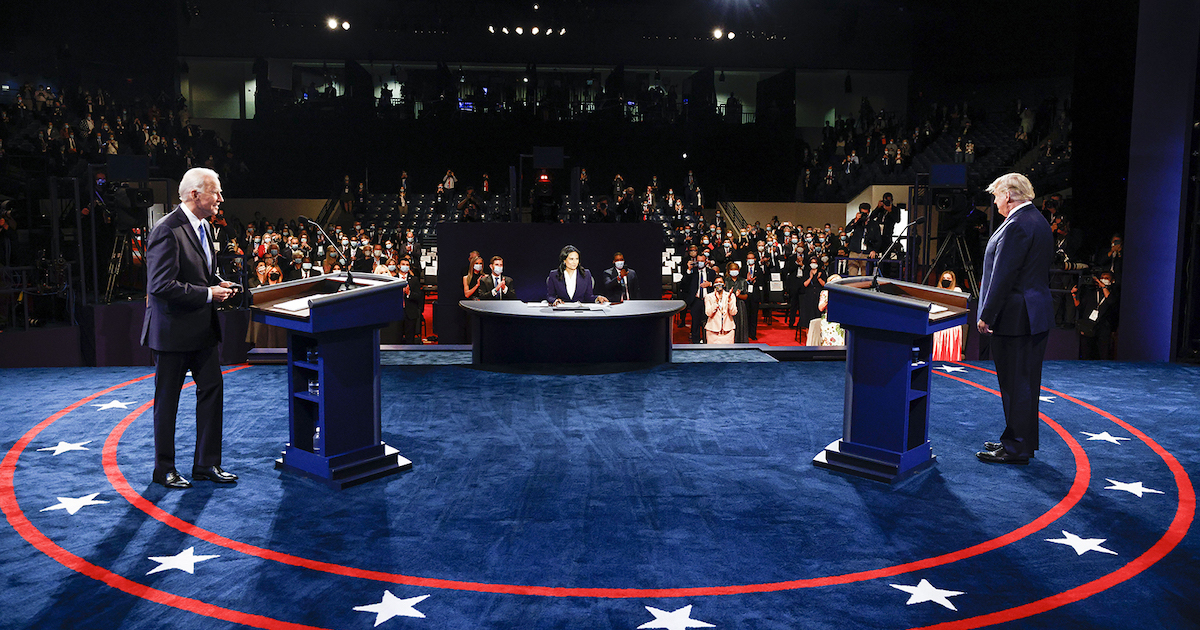 Who Should Run the Presidential Debates?

The presidential debates have come to an end, but the debate over who should run these important events in a presidential election cycle continues.

There is no question that the Commission on Presidential Debates (CPD) has willfully kept candidates outside the Republican and Democratic Parties out of the debates. They have even gone so far as to forcefully remove third party candidates from being in the same vicinity as a debate.

The CPD has been challenged in the courts for violating federal regulations that require it to use “objective criteria “ to determine debate entry. Yet, its monopoly over the process continues.

So, how should the presidential debates work and who should run them? A handful of third party and independent candidates offered their views on the subject over the weekend during an open debate presented by the Free and Equal Elections Foundation (FEEF), in partnership with Open the Debates and the Independent National Union.

The debate, slated as a direct rebuke to the CPD’s handling of the presidential debates and its exclusionary rules, offered third party and independent candidates an opportunity to air their grievances with the two party system. In total, five candidates participated in the event:

After each candidate presented opening remarks, the first question posed to each of the candidates is how they would change the way presidential debates are conducted, including who should be responsible for organizing and hosting them.

The League of Women Voters served as the principal sponsor of presidential debates from 1976 to 1984. They ended their involvement, however, after the Republican and Democratic Parties formed the Commission on Presidential Debates to ensure the debates served the interests of their campaigns.

The League called the CPD’s takeover “the hoodwinking of the American public,” and said it had no intention of helping the parties and their campaigns “perpetuate a fraud on the American voter.”

READ MORE: Everything You Need To Know About the Commission on Presidential Debates

Since the CPD took over the debates, a third party candidate has only been invited on the debate stage once -- Ross Perot in 1992. Then, in 2000, the debate commission adopted new rules to determine candidate eligibility, including a rule that requires candidates to poll at 15% in 5 nationwide polls hand-picked by the commission.

No third party candidate, to date, has been able to overcome the 15% barrier. Pierce explained in the open debate that pollsters often don’t include candidates outside the major parties. If a voter says they are voting for someone other than the Republican or Democrat, the pollsters mark them undecided.

“The Commission on Presidential Debates is a giant corporate fraud,” said Howie Hawkins. "They negotiate a contract and hand it to the news organization, and say, ‘This is what we are going to do.’ It should be the opposite.”

“I think what we really need is public campaign financing, and when you accept that money you have to participate in the debates," He added.

He explained that when he ran for governor in New York, Gov. Cuomo wouldn’t debate him. He said the reason was Cuomo had so much money from wealthy donors that he didn’t have to listen to the people. “We have the best government money can buy.”

Hawkins suggested rules that would include every candidate who has ballot access in enough states to get an electoral majority in the first debate. Then, he said, we include polling to determine entry into the second and third debates. It would be a runoff type system.

Gloria La Riva, however, disagreed that ballot access should be a stipulation to determine debate entry.

She added that people don’t take anything away from the current debates because they don’t feel important issues are given substantive attention.

No matter how the candidates answered, the clear consensus opinion was that two-party control over the debates had to end. Yet it is worth noting that it isn’t just debates that the parties control. True, meaningful competition in the US political process requires an electoral system that puts voters first.

Perhaps the best way to see change in presidential debates is to incentivize public officials and candidates to put the needs of voters above their party -- whether that party be big or small -- and the only way to do this is to empower ALL voters at the ballot box through meaningful reform.