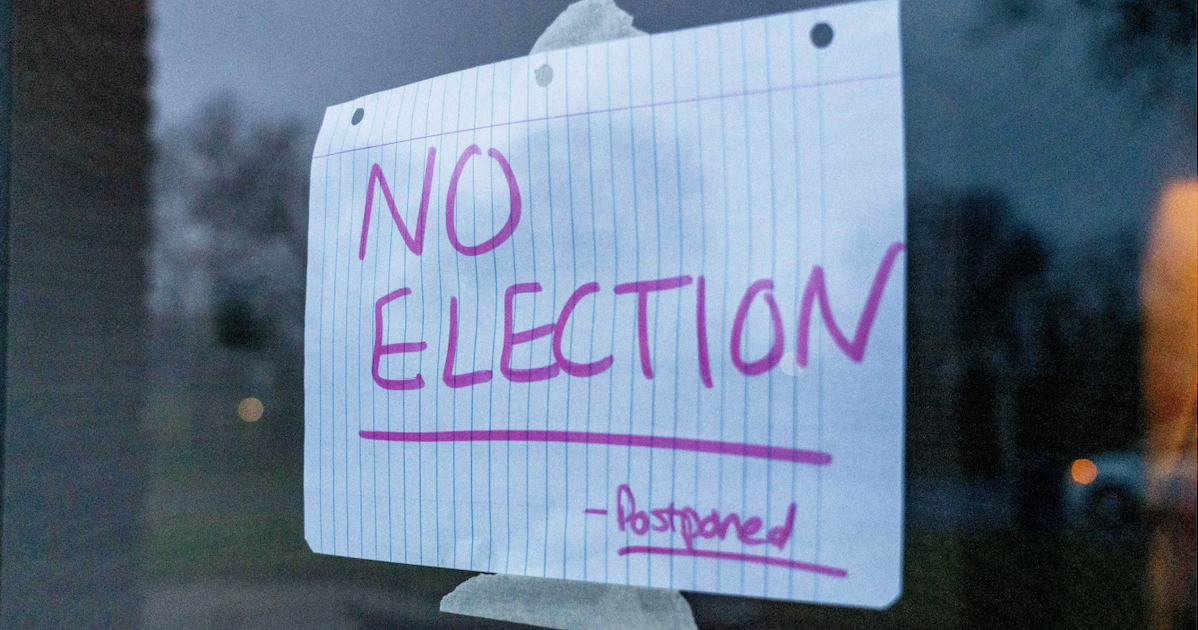 Pandemic Elicits Surge to Save A Democratic Process Already in Crisis

The COVID-19 pandemic has had a dramatic and devastating impact on American society and the economy. All 50 states and the president have declared a state of emergency, and over 100 million Americans now live under stay-at-home orders.

Meanwhile, Republican and Democratic lawmakers in Congress continue to squabble over a relief bill that the US desperately needs. Both sides failed to strike a deal on a multi-trillion-dollar stimulus plan over the weekend and on Monday, which prompted two partisan-charged hashtags on Twitter: #DemocratsAreDestroyingAmerica and #GOPSlushFund.

With so many told to stay home, the crisis has cost many people their jobs, hurt small and large businesses alike, and has serious implications for the 2020 elections still to take place. Seven states postponed their primaries in the 2020 election cycle in response to the COVID-19 pandemic while other states and local municipalities are scrambling to ensure a safe voting environment for their own elections.

Many pro-voter reformers argue that protecting the right to vote in the midst of this crisis is paramount and any relief bill must ensure that every voter has an opportunity to participate in the democratic process, regardless of the cost.

Every constitutionally eligible voter has an equal, fundamental, unconditional right to cast a ballot for the candidate of their choice. Yet, barriers in several states make it harder for some voters to vote in any given election.

As the COVID-19 pandemic leaves the security and safety of elections this year in question, groups like the National Vote at Home Institute (NVHI) are working with state and local elections officials, secretaries of state, legislators, and other state and local organizations to promote and strengthen vote-at-home methods -- including vote-by-mail.

"In the event of crisis, eligible voters must retain functional access to their American civic rights,” says Amber McReynolds, CEO of NVHI.

U.S. Sens. Ron Wyden and Amy Klobuchar recently introduced a bill that would give all voters nationwide an opportunity to vote-by-mail in November by authorizing half-a-billion dollars in federal grant money to states to cove postage and other related costs.

“Without federal action, Americans might have to choose between casting a ballot and protecting their health. That’s wrong, and we must take swift action to address the problem,” writes Wyden and Klobuchar.

“The best way to ensure that this virus doesn’t keep people from the ballot box is to bring the ballot box to them. We must allow every American the ability to vote by mail. And we must expand early voting so that voters who are not able to vote by mail are not exposed to the elevated infection risks of long lines and crowded polling locations.”

Most -- though not all -- states offer an avenue by which most or all voters can cast a ballot by mail. However, what many may not know is that 5 states (Colorado, Hawaii, Oregon, Utah, and Washington) have all-mail voting systems in which ballots are automatically sent to every registered voter.

What is especially notable about the states that use all-mail systems is that they also boast the highest turnouts in any given election. In Oregon, for example, 70% of eligible voters cast a ballot in the 2016 presidential election. Colorado was slightly higher at 72.9%. Washington state tallied a turnout of nearly 79%.

“It’s better for voters,” says McReynolds, who also served as the top elections official in Denver when it instituted its vote-by-mail system. “This is a solution to enfranchise people who would otherwise be disenfranchised by a public health disaster.”

The proposal is now front-and-center in the national conversation on electoral reform. The New York Times editorial board says vote-by-mail is “key to ensuring the integrity and accessibility of November’s vote.”

Congressional Progressive Caucus Center Executive Director Liz Watson wrote in The Hill that “vote at home is clearly the answer to upholding the basic democratic value of the right to vote. This solution will protect both the right to vote and our public health--a win-win that saves our democracy and saves lives.”

The NVIH announced that it will release a “detailed and scalable” vote-at-home plan “that can be adopted by every state across the country.”

“Putting voters first is the National Vote at Home Institute’s top priority, and voting at home is one of the best methods to facilitate voter participation securely, conveniently, and in a cost effective way,” the organization states.

The National Vote-at-Home Institute is one of 30 organizations represented by the National Association of Nonpartisan Reformers.

The New York Times wrote that “a functioning democracy requires elections that are free, fair, accurate and on time, even during a global health crisis.” Yet, US elections fell well short of this mark before the COVID-19 pandemic.

Removing barriers to the ballot not only means making it as convenient as possible for voters to participate in the democratic process, but ensuring that this fundamental right is meaningful and unconditional.

“Free, fair, accurate” elections means voters have access to all stages of the taxpayer-funded elections process -- including critical primary elections.

There is no way to ensure that elections are free, fair or accurate as long as the right to vote is conditioned on joining a political party. That is the situation in several states, but it could soon change in one of the nation’s biggest battlegrounds.

Florida voters will officially have an opportunity to open the state’s primary elections to 3.7 million registered independent voters under Amendment 3 in November. The amendment implements a nonpartisan open primary for the state’s executive and legislative primary elections.

Both major parties attempted to block the amendment from appearing on the general election ballot. However, the Florida Supreme Court rejected the parties’ main argument that the amendment’s summary was too ambiguous and confusing.

"This may be the most important issue on the ballot in any state other than the presidential election because, all across the country, everyone is looking,'' said Gene Stearns of All Voters Vote, the organization spearheading the reform effort.

"If Florida allows nonpartisan elections, everyone else will follow. The whole objective is to reduce the toxicity of our political process.”

The amendment needs 60% of the vote to be approved, though some Florida voters have expressed concern that the legislature might not honor the will of the people.

“I think what I’m really worried about is that even if Floridians come out and vote to support an amendment that opens primaries in Florida, that the Florida Legislature will not necessarily enable the will of Floridians. We’ve seen that many times in the past,” commented Tara Newsom, director for St. Petersburg College’s Center for Civic Learning & Community Engagement, to Bay News 9.

"And so I would really encourage Floridians to be paying attention to this constitutional amendment to open the primaries in Florida but to pay even greater attention to whether Tallahassee enables it.”

Colorado’s return to an open presidential primary proved to be a success in 2020. More than 1.8 million voters cast a ballot in the Republican or Democratic presidential primaries on Super Tuesday --  over 1 million just in the Democratic primary. According to the Denver Post, that is 8 times the number of Democrats who caucused in 2016.

Meanwhile, a hearing on a bill (AB 2207) that would add a public ballot option to presidential primaries for nearly 6 million No Party Preference voters in California has been postponed. The bill, sponsored by the Independent Voter Project, would ensure every registered voter has a choice in presidential primaries without having to change their registration or contact the secretary of state’s office.

Read more about the bill here.

The COVID-19 pandemic has had an impact on pro-voter reform campaigns with initiatives on the 2020 ballot. Voter Choice Massachusetts, for example, announced on March 16 it was temporarily pausing all of its campaign activities for its statewide ranked choice voting initiative.

However, the pandemic has not slowed the surge of support for the alternative voting method. In fact, scientist, author, and biotech investor Peter Kolchinsky -- managing partner of the Boston-based firm, RA Capital Management -- discussed on Twitter how ranked choice voting is needed to complement vote-at-home proposals.

“At-home voting is good even absent a pandemic. It increases voter participation; people who can’t get away from work or are home-bound are still able to vote. And it’s easier. More people voting is good for democracy. Covid is just accelerating us towards a rational goal,” he tweeted on March 21.

“But at-home creates a particular conundrum, especially for primaries. B/c people have to vote in advance, they might vote for a candidate that drops out after they send in their ballot but before the ballot count. That happened to millions of voters in CO & WA this year.

“You could try to fix that by adopting secure on-line voting so people could do it on the official voting day from home, but the technology is not quite ready, and it’s currently a can of worms. Another simple solution is to just ask…

“‘If your 1st choice candidate were to drop out before voting day, which candidate would be your 2nd choice? & if that person also dropped out, which would be your 3rd?” That’s called Ranked Choice Voting (RCV). Maine does it. Many cities do, including NYC, biggest in nation.”

In California, Colorado, and Washington, many voters sent in their ballots well before the Democratic primary thinned to essentially two candidates. How, then, can we say we got an accurate depiction of the race on Super Tuesday and the weeks that followed?

“RCV is used in elections in many other countries. It’s pretty simple. Just pick your candidates in order, starting with your favorite. You don’t have to rank them all. You can pick your top 3 (or just 2), & that’s better than picking just one, as we do now,” says Kolchinsky.

He adds that this further leads into another “fascinating consequence” of ranked choice voting: greater civility on the campaign trail.

Under a choose-one method, it is a zero-sum game of win or lose so campaigns go negative quickly to vilify their opponent. However, if a candidate sees an avenue to victory by campaigning for a voter’s second or third choice, they are much less likely to attack the voter’s first choice.

There is even historical evidence that ranked choice voting facilitates a less toxic campaign environment.

There are problems that exist at every institutional level of the US political process, which is why pre-eminent individuals and groups in the reform space have formed collaborative efforts like the National Association of Nonpartisan Reformers and the Bridge Alliance to figure out what solutions that will lead to greater competition, more accountability, and empower all voters in the process.

The COVID-19 pandemic has further exposed the vulnerabilities and weaknesses of the US electoral process. What impact it will fully have on the 2020 elections remains to be seen. However, Kolchinsky sees a potential positive that could save the political and electoral processes from the crisis it was already in:

"Just as Covid-19 has driven us into isolation in our homes, politically it could trigger a series of election reforms that could help bring us closer together for the long run."