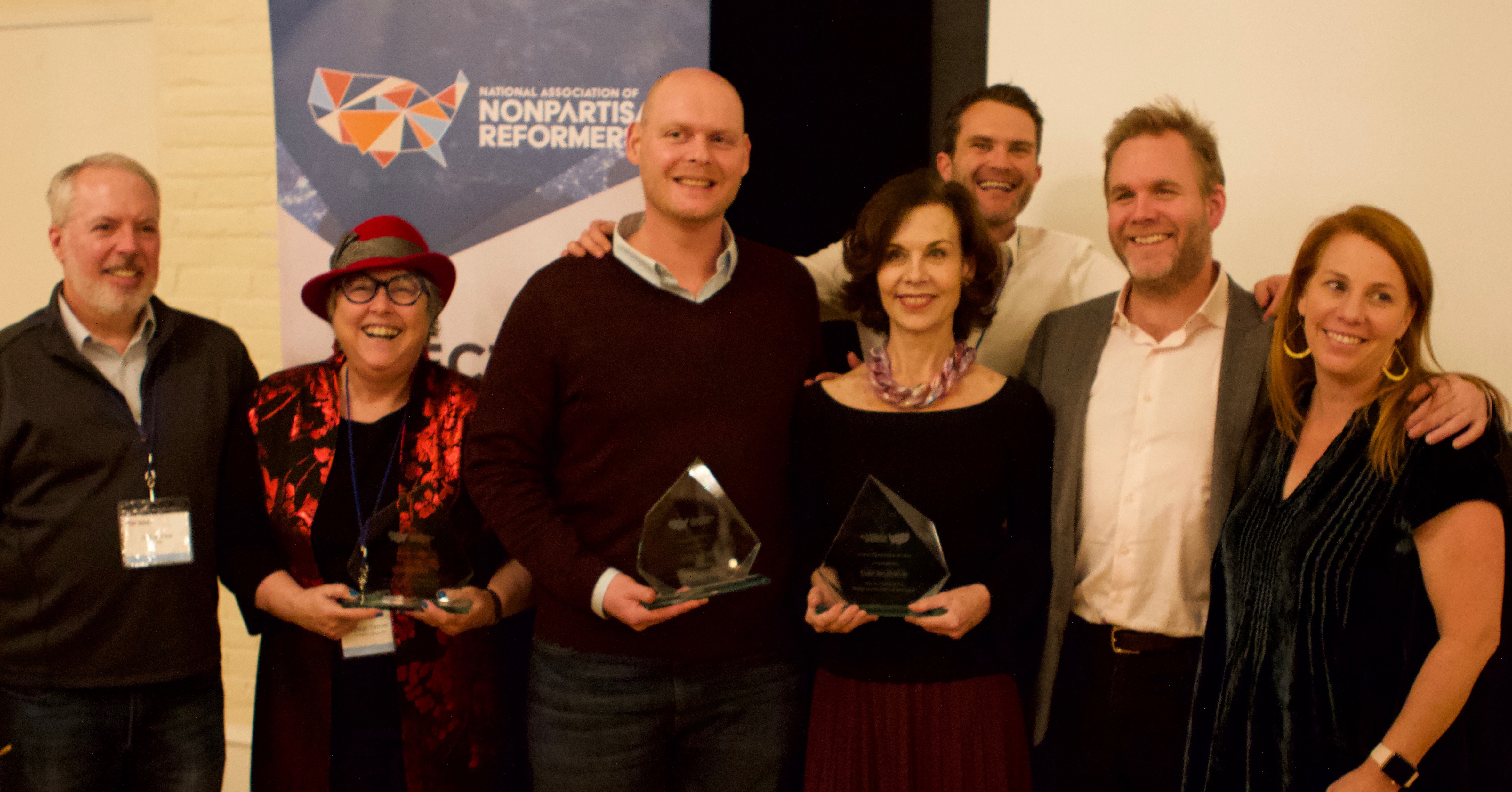 On December 6, 2019 nonpartisan reformers from across the country descended on Denver, Colorado for the second annual summit of the National Association of Nonpartisan Reformers (NANR).

The summit concluded with an award ceremony recognizing three remarkable individuals for their unparalleled commitment and leadership to advancing revolutionary, nonpartisan change to our current political system.

Kyle Bailey, the campaign manager for the Committee for Ranked Choice Voting, was instrumental in ensuring ranked choice voting (RCV) was adopted for presidential and statewide elections in Maine.

‍
In 2015, Bailey and co-founder of the Committee, Cara McCormick (both pictured left), delivered 70,000 signatures to the Maine Secretary of State in order to put the citizens initiative for RCV on the ballot for the November 2016 general election.

The grassroots campaign garnered support from across the political spectrum with the powerful, yet positive message of giving voters more choice in elections.

The initiative, certified as Question 5 on the ballot, passed in November of 2016, but the fight for reform was far from over.

In 2017, the Maine Supreme Judicial Court issued an advisory opinion that concluded RCV could not be used in the general elections for governor and state legislature.

The Maine legislature then called a special session in October 2017 and introduced a bill that essentially repealed the RCV Act.

Bailey’s leadership during this time was invaluable. On the very same night the surprising repeal bill passed, Bailey and his team immediately organized a "people's veto" campaign to save RCV in Maine.

This meant they would have to gather 60,000 signatures during one of the worst winters in Maine history in order to block the repeal.

Thousands of Mainers were without power, streets were flooded, and wind gusts were at 70 mph.

Against all odds, Bailey and the RCV Committee gathered 80,000 signatures in just 88 days.

The historic 2016 campaign led to Maine being the first state to enact RCV for both primary and general statewide elections for governor, state legislature, and Congress.

The RCV Act passed with 52% of the vote, earning the second-greatest number of votes in the history of initiatives in Maine.

In 2019, Maine made history again by expanding RCV to presidential primary and general elections.

On November 3, 2020, thanks to Kyle Bailey and the extraordinary individuals from the Committee for RCV, Maine will officially be the first state to use RCV in presidential general elections.

Susan Lerner led the battle to implement RCV in the most populated city in the United States: New York.

As the Executive Director of Common Cause New York, an organization dedicated to empowering and protecting the voice of the people in our political process, Lerner leads one of the largest movements of election and campaign finance reform.

On November 5, 2016 NYC voters enthusiastically passed RCV for mayor and city offices with 72% of the vote.

The leadership that Lerner demonstrated to pass RCV, in a city with a population of over 8 million, is unprecedented.

As one of America’s most diverse cities, New York City has a population that speaks over 800 languages.

Half of all New Yorkers speak a language other than English, ranging from Spanish Creole and Russian to Chinese and Hindi.

As you can imagine, distributing RCV education materials to voters throughout the city was no simple task.

This required Lerner's foresight and leadership to ensure that all communities had equal access to the important RCV information that was needed for voters to fully understand what the reform was and how it would positively impact voting in New York City for generations to come.

Lerner even joked during the NANR awards ceremony that if any reformers ever needed RCV materials for voters translated in Creole, Urdu, or any of the other many languages spoken in the Big Apple to give her a call.

While celebrating this historic reform in NYC, Lerner was quoted saying that RCV “is the simple solution that puts power back in the hands of the people where it belongs. We look forward to working with our diverse partners and elected officials to educate New Yorkers on how this important reform will work in the local 2021 elections and beyond.”

‍Jackie Salit is the President of Independent Voting, a nonprofit organization that has a mission to develop a movement of independent voters, reform America’s political process, and connect the 40% of Americans who identify as independents.

Salit was awarded the Lifetime Achievement Award for her work as a political innovator and lifelong advocate for the rights of independent voters.

She has built the largest network of independent leaders and activists in the country and has a long history of working in the independent political arena.

Throughout the 1980s and 1990s, Salit was an essential component in the 1988 campaign of Lenora Fulani, a campaign which challenged numerous legal and political barriers facing independents and the African American community.

Later on, she helped to shape a groundbreaking coalition with Ross Perot, which led to the founding of the Reform Party in 1997, a party where voters from across the political spectrum could gather under a non-ideological tent.

Salit has managed all three of Michael Bloomberg’s campaigns for New York City Mayor on the Independence Party (IP) line and played a crucial role in securing Bloomberg’s victory in 2001, encouraging 47% of African American voters to abandon the Democratic Party in support of Bloomberg in 2005, and delivering the historic 150,000 votes for Bloomberg’s re-election on the IP line in 2009.

During her speech at the NANR award ceremony, Salit likened the summit of nonpartisan reformers to the 19th century Salon des Refusés of Paris, where artists would submit their work that had been rejected by the French government and Academy of Fine Arts sponsored Paris Salon.

Salit explained that these were the artists whose creativity transcended the rigid structures the Academy had defined for “acceptable” art at the time and who constantly questioned the institutional barriers erected against them.

These were the artists and thinkers of innovation, who fought to show their ingenuity to the world and open the floodgates to a revolutionary new era in the world of art that would be open to more voices.