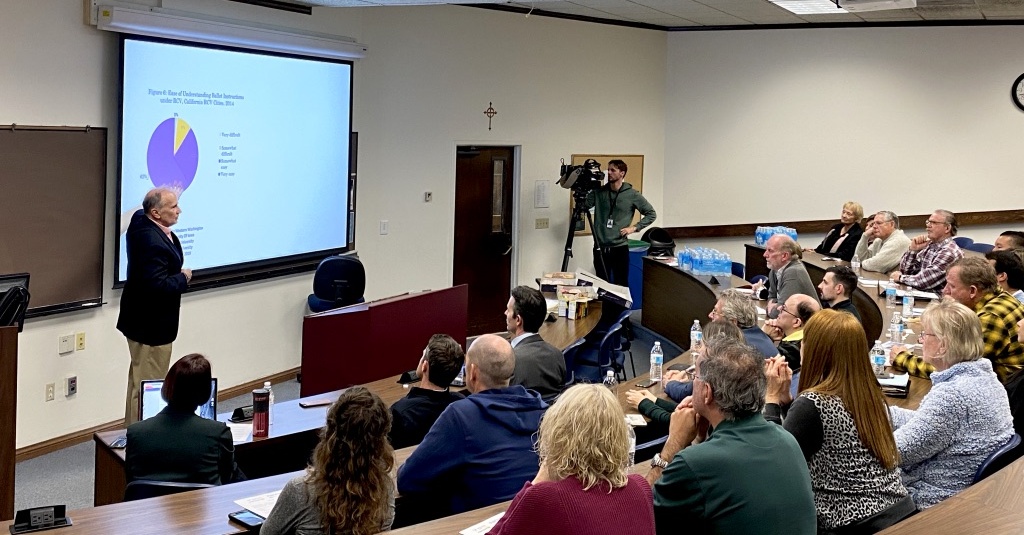 What are some of the benefits surrounding adopting a top-four primary using Ranked Choice Voting (RCV) in San Diego? What are some potential concerns voters have? This past week, the Independent Voter Project, League of Women Voters San Diego, RepresentUs, Fairvote, and independent Councilmember Mark Kersey set out to find answers to some of these very questions with local San Diegans and fellow reformers.

Not only was there a discussion about the promising election reform, which has recently been adopted in New York City and Maine, but attendees also had the opportunity to participate in a live demo of the voting method presented by Amy Tobia of RepresentUs.

Mark Kersey, who represents San Diego’s Fifth District, explained some of the flaws of our current electoral system by stating,

Kersey also discussed some of the benefits of RCV by saying,

“It gives voters more choices, introduces more competition, and hopefully cuts down on negative campaigning. Something like this is a much needed reform that would help our civil dialogue.”

One of the main concerns that attendees had about RCV is that implementing the new reform could lead to voter confusion surrounding the process of ranking candidates and as a result, ballots will be invalidated. Kersey said, “I think explaining to voters who are used to voting for one that they now have the option to rank people will require outreach and more forums like these to explain what the options are and how people can do it.”

Ed Chaplin, from Represent Us, led the discussion and answered similar concerns by adding that often awareness campaigns are not enough and it “really comes down to the design of the ballot.”

While clear labeling and a user-friendly design will definitely make a difference in addressing voter understanding of RCV, studies in other cities that already use RCV do show that the majority of voters are quite comfortable using it.

When San Francisco first started to use RCV in 2004, San Francisco University conducted an exit poll asking voters about their experience and found that 88.1% of respondents noted that they understood RCV perfectly or fairly well.

Over-voting occurs when a voter selects more candidates than they are eligible to vote for, thereby invalidating the ballot. In RCV, this would occur if a voter ranked two or more candidates in the same position.

According to the study, San Francisco’s Board of Supervisors elections, which use RCV, actually had less over-votes than the Top-Two Primary system in three consecutive elections.

In general, attendees of the public forum appeared optimistic about the possibility of a top-four primary using RCV in San Diego and agreed that the current system we have in place limits voter choice and does nothing to prevent special interests from dominating our electoral system.

Mark Kersey finished his discussion with the forum by stating,

“We also know that interest groups, whether it’s the parties or labor unions or chambers of commerce or whoever will try to game the system, there’s no doubt. But they’re already gaming the system. If that’s your criticism of ranked choice, then you need to look at what we have right now because they not only are gaming the system, they basically own the system.”

The coalition will continue the discussion and determine whether moving to a top-four primary would improve the system and whether to pursue a November ballot measure to ask the voters.