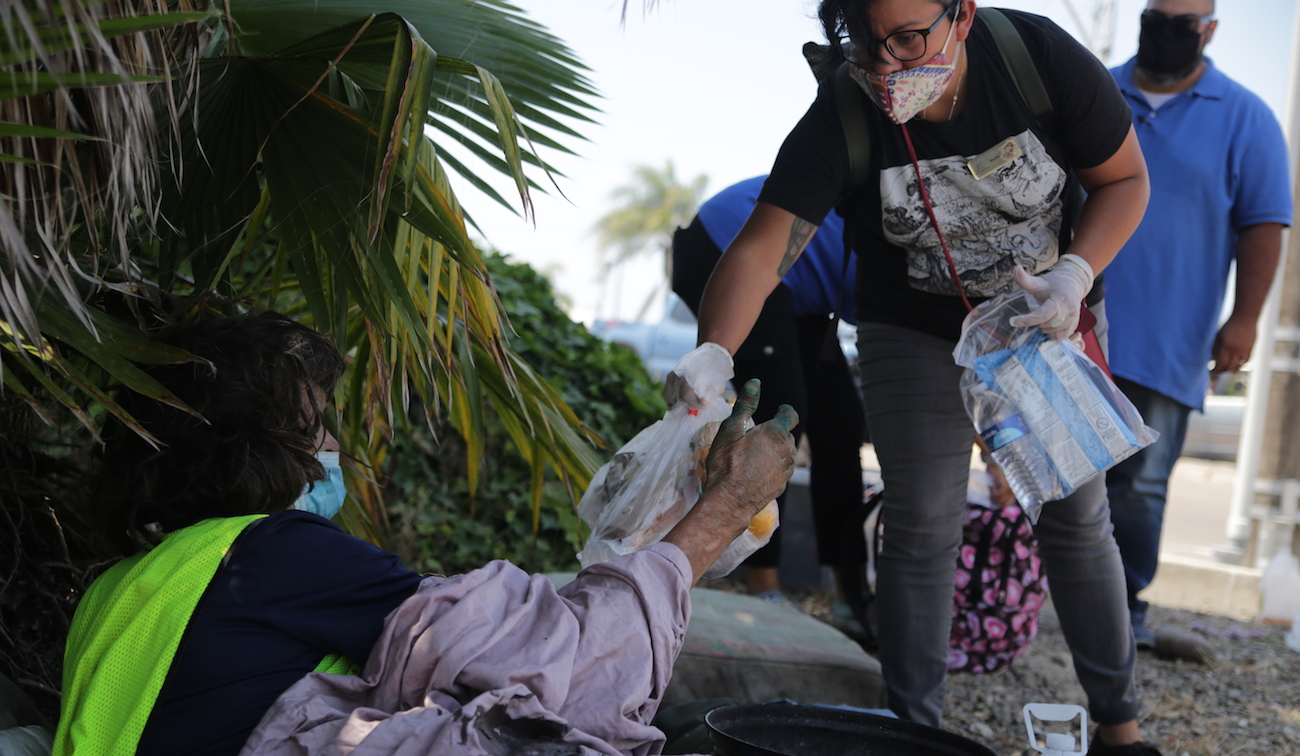 Apps and software platforms are built based on profit motives. Anybody with a technology budget — a bank, retailer, or even a home-services provider (like a plumber or an electrician) — can buy industry-specific software to manage their business affairs.

Capitalism rules. However, software platforms do exist that can e-manage homelessness.

Counting the number of people experiencing homelessness in a region has traditionally called for clipboard, paper and pen. All over the country, during the last week in January, communities enlist volunteers to do an official hand count of sheltered and unsheltered residents.

“It’s called the Point-In-Time Count, and yes, it’s challenging,” says John Brady, who has been on both sides of the clipboards for the PIT.

Prior to 2016, Brady was among those sleeping on the streets of East Village in downtown San Diego. That year, he discovered the Voices of Our City Choir, a nonprofit organization that inspired him to face his demons and find housing.

Today, Brady is the advocacy and outreach director for Voices of Our City. In addition to that full-time job, Brady is on half a dozen local boards that focus on homelessness, including the (newly re-organized) Regional Task Force on the Homeless.

Brady says there’s no ideal way to wake somebody up in their tent in the middle of the night and ask “How many people are in there?”

He recalls that when first approached (while homeless himself) by someone with a paper ballot he thought it was a stupid idea.

“My perception was that nobody was going to want to give out the amount of detail that was being asked in the survey,” Brady says. “What is interesting is that almost universally, people are willing to provide that level of detail.”

Incentives — like gift cards — help. Brady adds that anybody who doesn’t want to give out personal information just gets counted, period.

So, the data appears to be reachable.

To that goal, the RTFH, which is an arm of the city and county of San Diego, recently invested in SimTech Solutions and its “Counting Us” app.

With the introduction of the SimTech app, Brady is “excited about what we can learn as this tool is explored and developed.”

As a past PIT volunteer, he recalls the challenges of using the hard-copy tools in the field to count others.

In 2018, Brady was assigned to count some of the biggest encampments that lined Seventeenth Street in East Village. It’s a rough part of town — but one of the biggest obstacles to doing the count, however, was not having enough pieces of paper.

“First of all,” he says, “it’s tough because the count is done late at night. Somebody has to hold a flashlight for you while you write on the paper on the clipboard. And, it’s one piece of paper for each person — and that night we ran out of surveys.”

Brady didn’t know what to do. He had to stop counting. Granted, spot counting of the area was allowed the next day. But imagine that the federal funding for San Diego that comes from accurate PIT counts getting skewed…due to a limited availability of copier paper.

“There’s job satisfaction in this,” he says earnestly. “Yes, making money is important, but at the end of the day this is a rewarding job.”

At one point, Simtech was a consulting firm for the U.S. Department of Housing and Urban Development. That’s when Simmonds learned to develop software for HMIS that dovetails with HUD requirements.

The technology has been used by more than 50 regions throughout the United States. He says the software has been used to report $1.5 billion in HUD-funded investments.

Simmonds notes that the for-profit world has figured out how to take advantage of customer-related software. Those are the programs that know your buying patterns, habits, pets and what websites you visit.

“We’re applying that to finding ways to help people,” he says. “We can get to know people, learn their fears, their needs and then work to help them within the confines of their special needs.”

Simmonds believes having an app to count people experiencing homelessness is analogous to the introduction of the TV remote control. “You didn’t know you needed one until somebody invented it,” he says.

How does it work?

Volunteers download the app onto their own device (a phone, a tablet, etc.). They need to register for an account in a specific region. A unique key allows a device to be configured with survey questions and geographic boundaries unique to a region.

Inputted data flows directly to a Simtech regional command center (and is not retained in the volunteer’s device). It’s incorporated into dashboards, reports and maps. Data input errors can be addressed and corrected in real-time by supervisors.

Simtech also has other apps and programs at work and under development that collect pertinent data. It’s hoped that a “Show The Way” app can be used by street outreach workers in a year-round capacity.

One SimTech application is being used in San Diego by the Lucky Duck Foundation. After COVID struck, this philanthropic group launched a countywide effort to deliver food and water to unsheltered residents — many of whom are in hard-to-reach places like riverbeds and canyons.

Simmonds says the Lucky Duck program makes use of a custom survey that’s been inserted into the Counting Us app.

“It’s got the same GPS function,” he says. “So, it can show you where people are located. But it has different questions in it — mainly to capture information on what provisions have gone to specific locations.”

With that information, Lucky Duck, which to date has provided 200,000 meals, can increase or decrease provisions given to specific service provider partners, and better manage distribution.

“For example, the app can show us that we’ve covered Balboa Park for the day, but we need to send one more team out in El Cajon,” Simmonds says.

The Right Tool in the Right Hands

One outspoken homeless advocate who has become frustrated with local attempts to effectively strategize on the problem is maintaining a wait-and-see attitude on new HMIS.

“I haven’t ever seen anything that’s more than government reporting for grants and HUD and things,” says Michael McConnell, who runs the widely viewed Facebook page “Homelessness News San Diego.”

He says homelessness services in San Diego are widely dysfunctional.

“It’s a big problem here — and we don’t use much of the data we already have,” McConnell says. “Don’t get me wrong, data and technology are important. But the key will always be leadership (and) having a strategy.”

Dan Shea offers a similar sentiment. The businessman/philanthropist is a Lucky Duck Foundation board member.

“Data and electronics are the answer,” he says. “But you have to put it to good use. This is an electronic world and it’s smarter to invest in that than something like the brick-and-mortar Navigation Center that came from the mayor.”

The city recently had a messy split with the nonprofit that had been running its controversial, 2-year-old homeless continuum facility.

Given the current landscape — which includes a termed-out mayor, a recently reshuffled RTFH board and decades of circular progress on homelessness — I asked Simmonds if his technology can make a difference.

Is it anything akin to King Arthur’s sword? Could yielding it bring power and change?

“We can help inform decision making,” Simmonds says. “Our tools use empirical data to expose the good and the bad. I think the task force has a willingness to go out and do the work.”

Simmonds knows that Not-In-My-Back-Yard-ism can be a roadblock to homelessness solutions.

“I think you can use data as a defense to reactions caused by NIMBYism,” he says. “Data can allow you to come at cases with facts. It can help you make the case that something is the right thing to do, and it’s not that expensive because here are the numbers right here.”

Simmonds declares that Simtech is ever-proactive in the field, and will be able to pivot based on the possibility of HUD cancelling the 2021 PIT Count because of COVID concerns.

It should be noted that the 2020 PIT was completed and reported in nearly half the time of previous counts—even with a COVID-related delay factored in.

“We’re already looking upstream,” Simmonds says. “We’re seeing how we can impact school systems, getting a job and getting housing. I’m biased, but we are at the forefront of this.”

If that’s true, San Diego’s next step toward a serious approach to abating homelessness is to produce a King Arthur-caliber leader in City Hall. If his or her secret weapon is a tech-imbued sword, it’s currently stuck between a rock and a hard place.