Up Next
...
Does Anyone Else Remember When Politics Was About Policy?
Read More 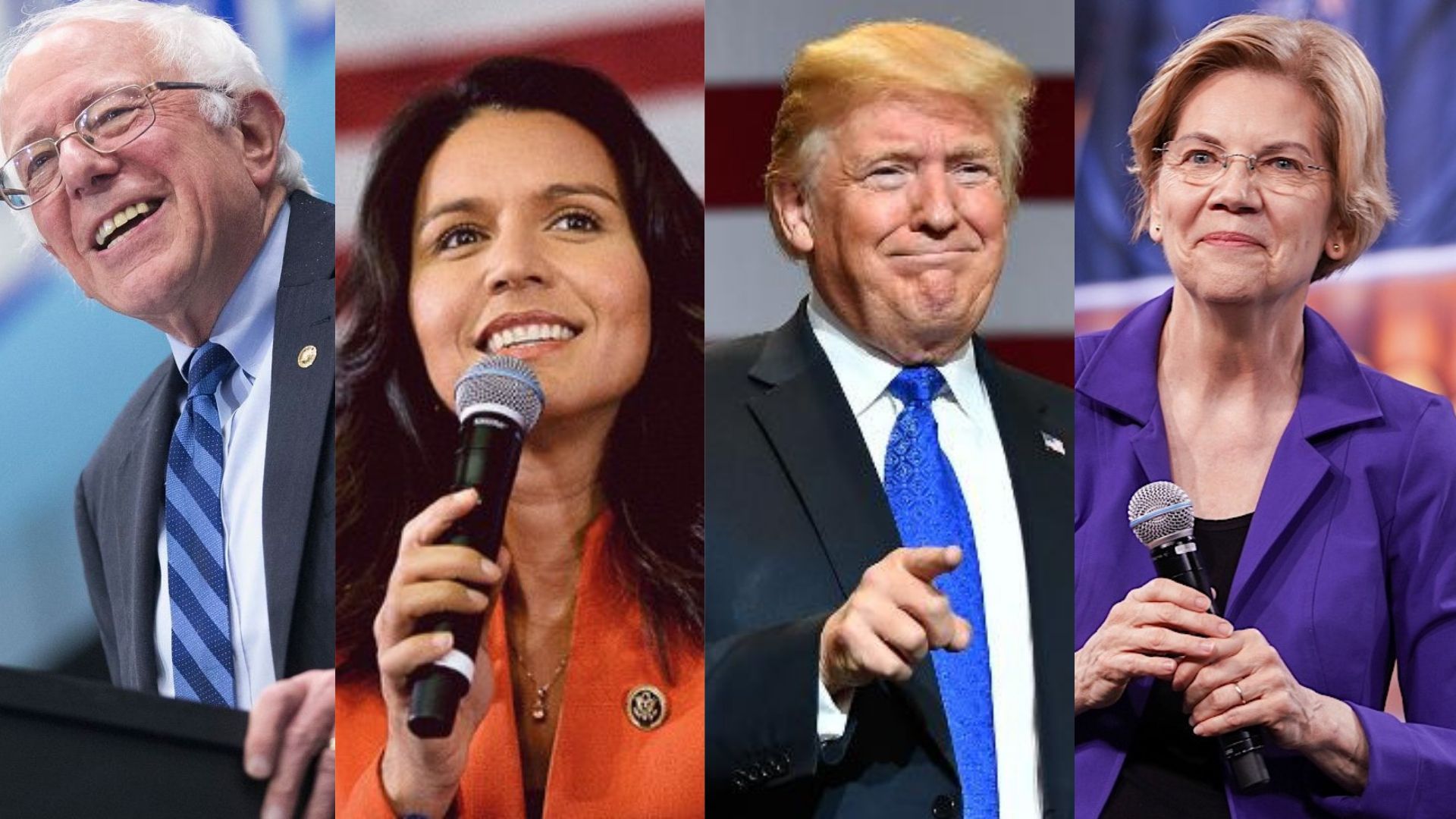 Last week, we asked the IVN Facebook audience to tell us who they would be willing to support in the 2020 presidential election. The survey, which represents the views individual members of our audience, was taken by over 1,100 people between Wednesday, August 28, through Sunday, September 1. Survey takers were allowed to choose as many candidates as they wanted -- indicating not just their top choice but who else they would be willing to support in an approval voting style.

Here are 5 important takeaways from the survey:

1. Bernie Tops the Field of Contenders, Followed By Gabbard and Trump

A considerable amount of IVN survey takers still say that they are willing to support Bernie Sanders in the presidential election. His support among our audience has statistically not budged since we asked our audience their 2020 preferences earlier this year. Support also remains relatively unchanged for Tulsi Gabbard and she remains the second most popular candidate among our survey takers.

Donald Trump remains in third among IVN survey takers, but compared to when we asked our audience the same question at the end of January, his support has dropped from 31% to 24%. The reasons for this could be any number of things, including the number of people who took the survey and the changes in which segment of the IVN audience took it.

However, more candidates have entered the race, including former Massachusetts Governor and 2-16 Libertarian nominee for Vice President Bill Weld, who is challenging Trump for the GOP nomination and garnered 5% in the IVN survey.

The one difference between the top 5 candidates in August vs January is Andrew Yang, who was not included in the earlier survey, though many survey takers did write in his name.. He garnered 9% among IVN survey takers, though he is in a virtual tie with Fort Bend Mayor Pete Buttigieg, as he took just three more votes than Mayor Pete.

Check out the full results here.

2. More Survey Takers Identified as Independent of any Party or Ideology

At IVN, our audience includes Republicans, Democrats, third party voters, who refuse to join any party. Our audience, therefore, cannot be put into a single political box or defined by conventional political wisdom. Being independent, to us, does not require an absence of ideology or party affiliation, but is a mindset. It means being open to persuasion and acknowledging that there is often merit in opposing ideas.

In the most recent survey, 30% of respondents identified as "Independent" -- meaning there is not a political party that best represents their views -- versus the 18% who said they identified as "Democratic Socialist," followed by Republican, Libertarian, and then Democrat.

Yet, despite political identification the results remained relatively unchanged for the top 5 candidates, with the exception of the number of Trump supporters and the inclusion of Andrew Yang.

3. The Second Most Popular Candidate among the IVN Audience Will Not Be In The Next DNC Debate

All the Democratic candidates who ranked high in the IVN survey will be in the September DNC debate, except one -- US Rep. Tulsi Gabbard.

Democratic candidates had to meet a fundraising threshold of 130,000 unique donors and a polling threshold of 2% in national or early state polls. The only polls candidates can use though to claim debate eligibility are polls chosen by the DNC. Specifically, the polls had to be conducted by CNN, Fox News, CBS, ABC, NBC, the New York Times, the Washington Post, the Wall Street Journal, USA Today, the Associated Press, NPR, the Des Moines Register, Monmouth University, Quinnipiac University, the University of New Hampshire, or Winthrop University.

Gabbard met the fundraising threshold, but she released a statement on August 23 stating she “has exceeded 2 percent support in 26 national and early state polls, but only two of them are on the DNC’s ‘certified’ list.” Most recently, Morning Consult put her at 4% in early primary states. However, Morning Consult is not on the DNC's list of qualifying polls. In a recent Economist / YouGov poll, Gabbard polled at 3% in the Democratic primary. Again, though, the poll doesn't count. Gabbard has called on the DNC to revise the list of qualifying polls and to be more transparent in the debate process.

Gabbard still has an opportunity to qualify for the October debate stage, but it will be a tough hill to climb when denied access to the public stage and media coverage.

4. Few Are Ridin' with Biden

Former Vice President Joe Biden may be considered the front runner in the media, but he doesn't have much support within the IVN audience. In the most recent IVN survey, Joe Biden garnered only 6% support. That is one percentage point higher than GOP candidate Bill Weld. who has been left out of the national conversation while the media spotlight has shined brightly on Biden's campaign. Interesting to note, the difference between Biden and Weld was 5 responses.

Most of the candidates who rank highest among the IVN audience are not your traditional party candidates. Sanders, for instance, is a democratic socialist whose 2016 presidential campaign was marginalized and essentially derailed by the Democratic Party. Many independents were drawn to his campaign as he was the anti-establishment counterpart to Hillary Clinton and his support based has largely remained loyal.

Tulsi Gabbard continues to garner support if not respect from people across the political spectrum for her willingness to challenge the political establishment in DC and her own party, most recently questioning the party's approach to debates, which got her in trouble with party leadership in 2016 as she was serving as vice chair of the DNC. She resigned to support Bernie Sanders.

President Donald Trump continues to turn politics-as-usual on its head, espousing some extreme positions on issues like immigration, but also rejecting the long-held policies shared by both parties on issues like trade and military involvement overseas.

Elizabeth Warren's candidacy has energy behind it and as Bernie Sanders has mostly remained stagnant in the polls, some polls have Warren now in second place in the race. Her position on Medicare for All and the Green New Deal put her in a favorable position with voters who also support candidates like Bernie Sanders and Tulsi Gabbard.

Andrew Yang is largely a single-issue candidate, running on a universal basic income platform that would give every American adult $1,000/month -- what his campaign is calling a "freedom dividend." It is a policy position unique to his candidacy, and while he is getting far less media attention than other candidates, he is managing to poll just high enough and continues to meet the rising fundraising threshold to qualify for the DNC debate stage. And, while he might not be polling high nationally, his unconventional candidacy has caught the eye of many independent voters.

Didn't have a chance to vote in the survey? Let us know in the comment section who you support in the 2020 presidential election.