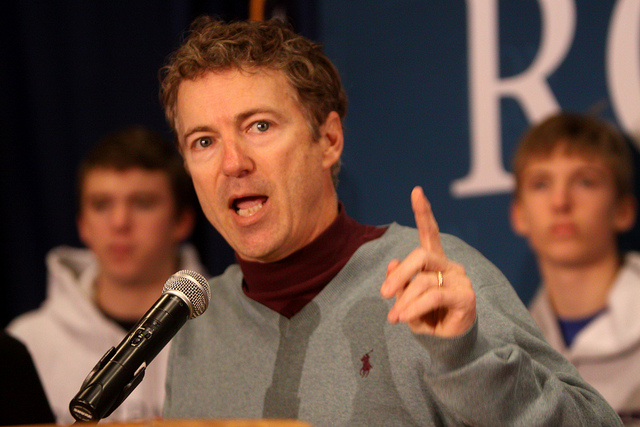 With a spate of shootings in recent months, there are calls for tighter gun control and President Obama has political capital to spend.

Getting much of what he wanted with the fiscal cliff, the president has proposed twenty-three executive orders, a practice he criticized while a U.S. Senator, to address gun policy in the event Congress does not pass adequate legislation.

On the other side, Kentucky U.S. Senator Rand Paul declared on TV that the president does not have the authority to write laws - an authority not granted to the executive branch. As a solution to the overreach, Paul advocates for nullification of any gun law deemed unconstitutional with forthcoming legislation:

"In this bill we will nullify anything the president does that smacks of legislation. And there are several of the executive orders that appear as if he's writing new law. That cannot happen."

Paul's allusion to nullification is a controversial move and Virginia U.S. Senator Tim Kaine, a Democrat, objected to Paul's solution on CNN, calling it a "code word." Although he did not specify what sort of "code" nullification entails, a writer at The Daily Beast made the connection saying, "No, Senator Paul, we do not nullify things in this country. . . . This is no longer the antebellum era."

The implication is that nullification, and its association with states' rights, makes it concurrent with slavery and racial discrimination, but also perhaps hinting at the Nullification Crisis of 1832 that nearly caused civil war.

During Obama's presidency, nullification has emerged as a measure to thwart his agenda. It was reported on IVN that Wisconsin has attempted to nullify the health insurance exchange of the Affordable Care Act as well as several other states.

A popular book written in 2010 by libertarian Thomas E. Woods explicated the notion and history of nullification. The book was widely criticized by Republicans and Democrats, but remained highly profitable and helped make Woods a highly-desired speaker for libertarian, tea party, and constitutional groups.

Nullification is also sometimes known as interposition, because it places state governments between their people and the federal government by refusing to enforce federal laws the particular state believes is unconstitutional.

The first time nullification, or interposition, was invoked was through the 1798 and 1799 Kentucky and Virginia Resolutions. The occasion of the passage of the Alien and Sedition Acts made it illegal for citizens to criticize the president. Numerous citizens and newspaper editors were imprisoned for criticism of President John Adams.

In addition to Wisconsin's recent efforts to refuse enforcement of elements of the new health care law, there have been many other states and instances where nullification was utilized or attempted, although the word "nullification" has not always been used.

In 1854, the Wisconsin Supreme Court used nullification to refuse enforcement of the Fugitive Slave Act, a provision of the Compromise of 1850 that required the return of runaway slaves in free states to their owners in slave states. However, this act of nullification was eventually overturned by the US Supreme Court.

California voters in 1996 effectively nullified federal laws by approving the legalization of medical marijuana in their state. In the first decade of the Twenty-First Century, two dozen states nullified the Real ID Act, an attempt many saw as the imposition of a form of national identification.

The successful voter referendums in Colorado and Washington to legalize small amounts of marijuana were, in practice, acts of nullification. Even President Obama, who has been aggressive in his enforcement of the War on Drugs, admitted after the election that he would "let the voters speak," a tacit admission that the two states were nullifying federal law and the president does not plan to stop them.

Although Paul's legislation has not yet surfaced, it may not be the traditional execution of nullification. Whereas other instances of nullification were through state governments, this appears to be an initiative by the legislative branch to reclaim its constitutional powers in the face of a potentially escalating presidential power.

Still, the Rand Paul nullification proposal is likely to stir an already-contentious gun control debate. Gun rights are a passionate issue for many Americans and when faced with a president or a government they believe is circumventing the constitution, nullification often emerges as one of the only viable options.

Carl Wicklander is a 2006 graduate of Concordia University - Nebraska and is a student of history, politics, philosophy, and religion. He is originally from Bowling Green, Kentucky and today lives in Illinois with his wife.

"To be ignorant of the past is to be forever a child."