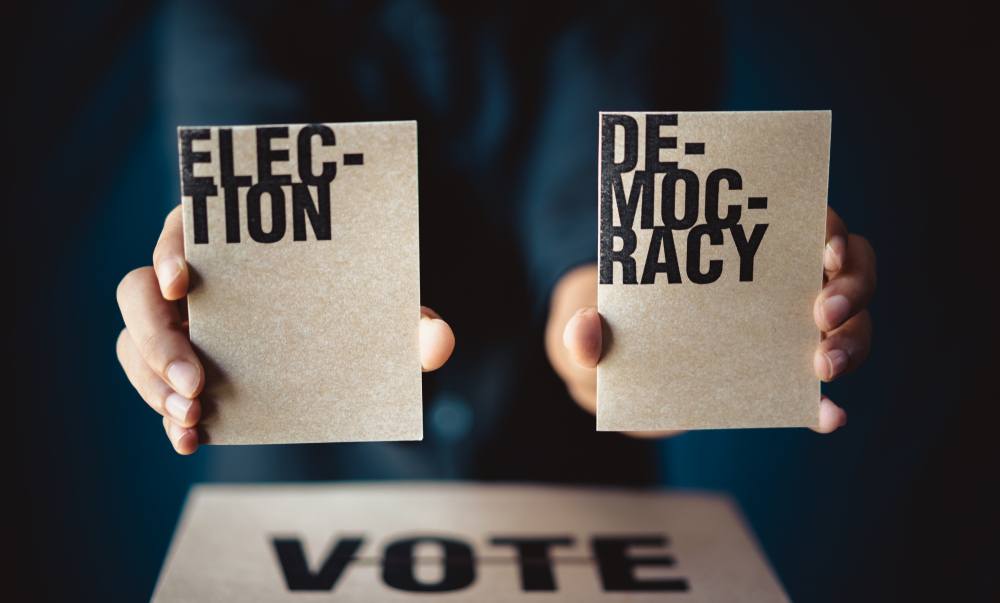 URGENT: We Offer A Path to More Choice in Elections; Only The Duopoly Stands In Our Way

This column was supposed to be a victory lap of sorts. The NH House Election Law Committee met on February 13, to deliberate about and vote on HB 728, a bill to implement ranked choice voting (“RCV”) in New Hampshire. It offers staggered implementation, starting in 2020 with the first-in-the-nation NH presidential primary.

We thought we had the votes for it to pass favorably out-of-committee to the House floor (though we knew it would be close), and we were anxious to move to the next step! The hearing had been held a couple of weeks prior, where the committee heard two hours of testimony in favor of the bill, and nobody came to testify against the bill! (Although a couple of completely solvable concerns were expressed).

A majority of the “majority caucus” specified that they’d be voting in favor. But the chair of the committee seemed reluctant, along with a couple of other key members, and leverage was used to convince the committee, instead, to retain the bill, wherein they will hold hearings in the fall and hopefully recommend it out of committee next year. That’s progress, but the American people desperately need RCV now, ASAP!

The delay – short of Herculean efforts on the part of the grassroots and numerous key movers and shakers – likely means NH won’t be able to use RCV in our presidential primaries.  So ... we’re going for the Herculean efforts, of course!

Also, Equal Citizens (Larry Lessig’s pro-democracy reform group) has joined us this year and is playing a key role in advocating for the use of RCV in presidential primaries. We also, certainly, have the help and input of FairVote, Voter Choice MA, Open Democracy, Take Back our Republic, League of Women Voters of Maine, the Committee for Ranked Choice Voting, the Chamberlain Project Foundation, and others.

A lot of people from across the political spectrum are working together to improve our democracy to give voters more voice and more choice. Unfortunately, we don’t have initiative and referendum ability in NH. We need the powers that be – and the public at-large – to recognize the urgency of implementing a reform that, ultimately, is advantageous to everyone.

Robust competition in elections makes for better dialogue, more choice, and better candidates, with stronger victors! It gives the start-up candidates a chance to get off the ground – if they’re going to – without harming popular established candidates (unless their support is merely due to lack of competition).

Shouldn’t it be a no-brainer that ranked choice voting would greatly improve presidential primaries?  When there are multiple candidates in our current first-past-the-post election system, the winner rarely has a majority of the vote (and often clinches a state with a very low plurality percentage).

Even more concerning is that many votes are “wasted,” as they go to candidates who don’t get any delegates. RCV positively engages everyone involved; it allows everyone to express their first true preference – giving all voters and candidates an equal shake.

But then it provides for “run-off rounds” so to speak, such that if there are candidates who don’t qualify for delegates after the first round, a new round can “eliminate” the lowest vote-getter and re-tabulate, using voters’ next preference (if their candidate has been eliminated), continuing the process until all voters’ votes go toward a candidate receiving delegates.

This has the potential to help both radicals and moderates, challengers and establishment, and would help people feel better about the victors who emerge from a primary, as better representing the “will of the people.”

Ranked choice voting is likewise important in general elections. We witnessed first-hand the importance of RCV in the 2016 election where the two major party candidates were the most disliked candidates in history. Many voters wanted to vote third party or independent, but they didn’t dare do so because they were afraid that voting for their favorite candidate would have the effect of helping their least favorite candidate.

Even so, in 13 states, third party candidates captured enough votes in 2016 to keep either major candidate from getting a majority. Even though Clinton won the national popular vote over Trump, neither the Electoral College winner (Trump), nor the popular vote winner (Clinton) secured a majority of the overall vote.

Shouldn’t we work to be sure that the winner truly represents the most people, and isn’t simply the benefactor of “vote-splitting”?

This holds true not just for presidential elections, but also for races for U.S. Senate, U.S. House, governor, state senate, state house, etc. Let’s not relegate third parties and independents to the category of “spoilers.”

ALSO READ: Spoiler Alert: Schultz, the Democrats, and the Independents

Up until yesterday morning, I hadn’t paid too much attention to Howard Schultz, the Starbucks CEO contemplating an independent bid for president. I had seen the headlines, and read a few articles, but that was about it. But after reading Jackie Salit’s column, I decided to take a closer look.

I watched a lot of clips of him at his town hall, and other interviews, and read a lot of articles by the “talking heads.” Although I haven’t come close to deciding yet who I will personally support for president in 2020 – as I plan to take a close look at each candidate – I will say that Howard Schultz taps into an independent mindset that’s looking for a candidate who doesn’t see the world through a partisan lens. It is a desire for a candidate who thinks through issues and situations carefully, and isn’t quick to simply jump on their “party bandwagon,” sticking to their talking points and outrightly demonizing the other side.

Each candidate, each voter, each position deserves respectful dialogue. A successful candidate – in my book – will be able to fuse the noise coming from every camp, together, to come up with win-win solutions, rather than just making attempts at railroading in their-win solution against everyone-else’s-lose solution.

A truly democratic system has open elections; it doesn’t crush the competition before it’s gotten started. With over 40% of the electorate identifying as “independent,” it doesn’t make any sense to tell candidates like Howard Schultz to get out of the race.

Other independent and third-party candidates are still emerging, from the right, center and left. It makes a lot more sense to start working with URGENCY to get ranked choice voting adopted. Maine has already shown us that it can be done, and that it can be done smoothly and successfully. If it matters enough, the powers-that-be can get something passed quickly.

Sure, the media and the duopoly can work overtime to undermine any competition, and that method with our current system has so far mostly worked against outside candidates gaining much traction.  But even a little traction can “spoil” an election, and the American people are revolting. They don’t like things the way they are, and they’re looking for something new.

The best, do-no-harm way to let electoral competition thrive (short of nonpartisan primaries & RCV, e.g., “top four”), and let the best candidates and the best ideas rise to the top, is through the immediate adoption of ranked choice voting.

We’re working on making successful Herculean efforts here in NH. If you care about the 2020 election, you’ll do the same where you are. You’ll work to get RCV on the “urgent radar” in your state.

Tiani X. Coleman is President of New Hampshire Independent Voters. Prior, she served as Chair of the Salt Lake County Republican Party and was later the campaign manager for the 2010 Democratic challenger to Jason Chaffetz (former R-UT-3).