The Extra Point
Up Next
...
Chollas Creek Neighborhood Fights to Save its School Leaders
Read More 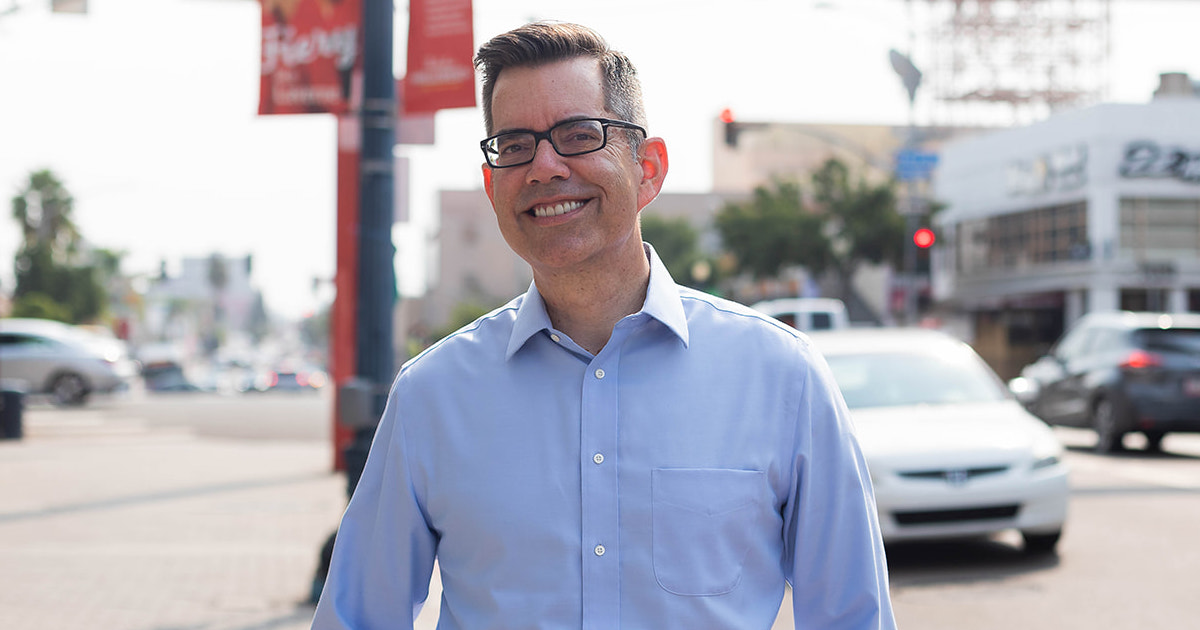 With the lessons from his parents in mind, Whitburn finally won a seat for public office after his third campaign in 12 years. Whitburn will represent District 3 on the San Diego City Council, beating his opponent, Toni Duran by 17,500 votes, 63% to 37%. Whitburn is joined by Joe LaCava and Sean Elo, who won in their respective races. As of Thursday evening, other council races were too close to call.

“I’m grateful to the people of District 3 and everyone else who supported my campaign for their confidence in me,” Whitburn said Thursday. “Now that the election is over, we’re hitting the ground running. I’m already in the process of putting together a great team to serve our residents well and improve the quality of life for everyone in our neighborhoods. I look forward to all of us working together to make San Diego the city we know it can be.”

The path to his seat on the City Council wasn’t easy for the downtown resident and nonprofit worker.

Whitburn said he first ran for City Council in 2008 against Todd Gloria — who currently leads in the race for San Diego mayor — because he wanted to “be more involved” after spending 16 years in journalism.

“I put my heart and soul into the race in 2008,” said Whitburn, who ran in the primary against five others before facing Gloria in the general election. He lost that November by 4,700 votes.

"Ron Roberts was an incumbent Republican in a heavily Democratic district so the party thought it was a real opportunity to elect a Democrat," he said. "In reality, it proved to be much more difficult than that."

Whitburn lost that race by a 13% margin.

In the decade since losing the supervisor's race, Whitburn said he's had time to enjoy his work in the nonprofit sector, serving as executive director of San Diego Pride before becoming a regional director for the American Cancer Society. In 2019, he decided to get back in the ring after learning Councilman Chris Ward was running for State Assembly rather than seek a second term on the City Council.

"There was an unexpected opening," Whitburn said. "[Holding an elected office] is something that I’ve always wanted to do. I thought if there’s a real path to victory, then yes, I’ll throw my hat in the ring. I’m very glad I made that decision.”

Whitburn isn’t the only one happy about his decision.

Mary McKenzie — the president of the Uptown Democratic Club, which endorsed Whitburn — said she voted for him because of his “desire to serve our community is real, demonstrated by a full history of service.”

“Stephen's extensive experience with non-profit organizations gives him a broad understanding of the resources available to help solve the crises facing D3 and the city of San Diego, including homelessness, the absurdly high cost of housing, and now, the social and economic effects of COVID,” said McKenzie, a Hillcrest resident. “I believe that Stephen will be accessible to his constituents and open to new ideas, both necessary in this COVID-world.”

Jared Sclar of downtown and Katie Meyer of Normal Heights both said they voted for Whitburn because they believe he will address homelessness and housing costs.

“He will prioritize real solutions for our homelessness and housing crisis that will make it more affordable to live here for everyone,” Meyer said.

For Hillcrest resident Steve Rosenstein, the decision came down to campaigns.

“I was not leaning one way or the other between the two candidates,” he said. “I think, though, the tipping point was the negative flyer I received from Toni Duran having Stephen Whitburn dressed like the Grimshaw. My feeling is telling me what you are going to do, not by making fun of your opponent.”

As Whitburn prepares to join the City Council, he’s got a handful of priorities in mind. He’s concerned about homelessness in the city — a population estimated at 4,887 in the city of San Diego as of April 2020 but could grow with the economic downturn.

"I see this tragedy every day in downtown," Whitburn said. "I see it everywhere I look. I find it frustrating as do many San Diegans."

Whitburn said he hopes to work with county Supervisor Nathan Fletcher, who up until now was the lone Democrat on the Board of Supervisors, to address homelessness.

“There’s a lot that our government can do to help people find housing, find treatment for people who have behavioral health issues,” he said. “We need a better partnership with the County of San Diego, which is responsible for behavioral health services.”

Whitburn is also proposing creating an outreach team to help the homeless — rather than use police officers — and finding more motels and hotels to house the homeless.

“I think we have a path to ending the widespread crisis we have,” he said.

Looking at City Hall, Whitburn said he also wants to address some of the failed real estate dealings the city has experienced, including the highly criticized 101 Ash St. deal. The city had spent $53 million for the building intending it to be the new city hall but it remains empty (San Diego has since stopped paying rent on the building). Whitburn is proposing the Independent Budget Analyst’s Office be tasked with analyzing land deals before they go to the City Council.

“The IBA advises on the City Council on budget matters, but doesn’t currently advise the council on real estate [deals],” he said. “That’s one frustration and one solution I see. I don’t see any specific reason why it couldn’t provide an analysis and advice on real estate transactions.”

Before tackling these issues, however, Whitburn said he'll build a staff committed to public service.

“The very first task is to bring on staff [members] who are smart, who know the issues and who operate with integrity,” he said. “I think we make far better decisions when we engage the neighborhoods we represent.”