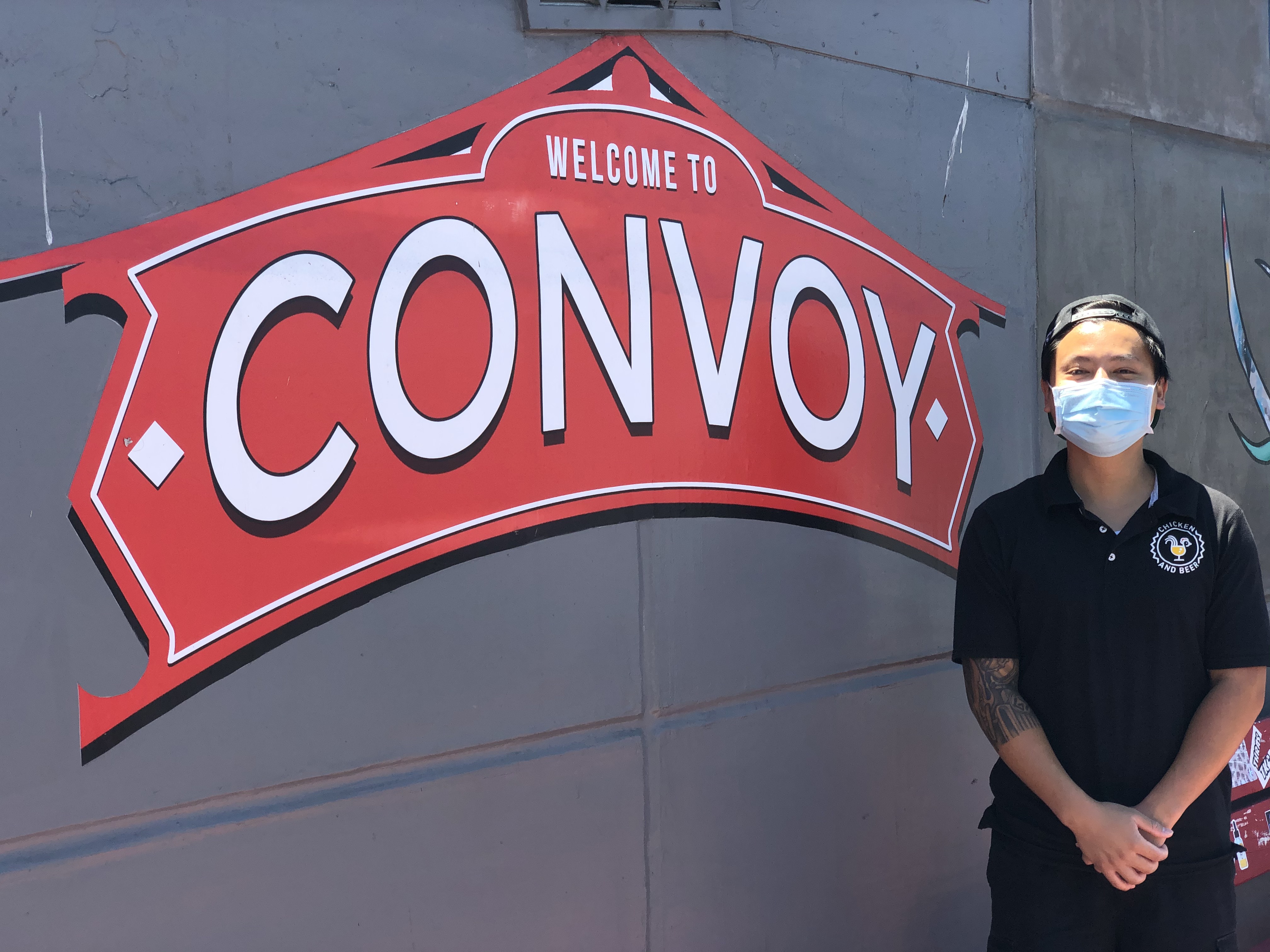 Tommy Nguyen stands in front of a sign at his restaurant, Cross Street Chicken & Beer. Photo by Hoa Quach
Neighborhoods

The Heart of San Diego: How The Asian Economy Keeps Beating

Allen Chan is a fixture in the Convoy District. In fact, it would be difficult to tell any story about this Pan-Asian community without talking to Chan, a judicious figure who stands out among the hundreds of business owners in the area.

Chan is the owner of Jasmine Seafood Restaurant, one of the oldest and largest Asian-owned eateries in San Diego. Before the mid-March stay-at-home order, the restaurant was packed with customers eager to enjoy a Hong Kong-style dim sum lunch or hundreds of wedding guests ready for a traditional 10-course Chinese banquet.

Chan and the rest of the Convoy business district were set for a breakout year in 2020, but the world changed.

Chan can no longer hop from table-to-table greeting his dine-in guests or support a crew of 50 employees by his side. Only about 10 employees now pack hot meals for take-out customers at Jasmine Express, a separate fast-food-style eatery next door. Restaurant revenues have plunged by 80 percent.

“It’s been devastating because so many people depend on the restaurant being open,” said Chan, who’s often referred to as Dr. Chan because he’s a chiropractor by trade. “The sooner we all follow health orders, the sooner we’ll see cases go down, and the sooner restaurants can fully reopen. It’s very simple.”

People of Asian descent own roughly 20 percent of the businesses in the Convoy District. Countywide, there are more than 30,000 Asian-owned businesses that generate more than $4 billion in annual gross sales, according to the Asian Business Association.

But, Convoy District businesses aren’t just facing economic challenges. They must also confront a growing stigmatism against Asian Americans, a group making up 12 percent of the San Diego County population.

When news of the novel coronavirus broke in mid-December, Asian Americans across the country began reporting incidents of hate. The Stop AAPI Hate Campaign — a center founded by the Asian Pacific Policy and Planning Council, Chinese for Affirmative Action and San Francisco State University’s Asian American Studies Department — reported more than 800 hate incidents in California between March and July.

One of those incidents occurred in the Convoy District when an Uber driver from Hong Kong shared a video of passengers harassing him and questioning whether he had COVID-19.

“There is a stigma with Asian-owned businesses and restaurants that, unfortunately, reached San Diego and Convoy District,” said Vince Vasquez, board member-at-large for the Convoy District Partnership, a nonprofit that oversees the area. “The whole ‘China Virus’ political characterization really hit home and it had economic consequences on our businesses that saw reduced customers.”

For Tommy Nguyen, a native San Diegan who owns Cross Street Chicken & Beer, it caused him and his family members to become fearful.

“Being Asian and a business owner, it scared us,” said Nguyen, whose family owns eight other restaurants in the area. “I think customers were afraid of coming to the Convoy District because people from the top kept calling it the ‘Wuhan Virus.’”

While the political world wages wars with words directed at a global conversation, the consequences of those words can have real and negative consequences in our own backyards, whether intended or not.

Nguyen said he isn’t sure what else he can personally do to fight racism against the Asian community other than using his voice. He was a part of the coalition of Asian Americans who called on national leaders to stop using political terms such as the “Chinese Virus” or the “China Virus” to advance a political narrative.

“We are doing the best we possibly can to combat any discrimination but we cannot do it alone,” said Nguyen. “We need to first see the change in our nation’s leaders. Racism has to stop at the top. From here, we can only do the best we can to deal with the judgment and the stigma.”

Although many Asian-Americans in the area are fearful of discrimination, the overwhelming support for the Asian community proves something more positive, said Lauren Garces, special events director for the Convoy District.

“It’s hard for all businesses but there’s definitely that extra fear among the Asian business owners,” Garces said. “Luckily, Convoy is very well-loved and the community quickly rallied to denounce any hate against Asians — or any race — over the virus. Of course, it doesn’t mean racism isn’t out there and business owners aren’t scared.”

While Nguyen, the owner of Cross Street Chicken & Beer, said he saw a drop in revenue shortly after the coronavirus made its way to the U.S., business is back at full-speed. Actually, he said, it's better than ever before.

Other eateries are also seeing business slowly pick back up. Nguyen credits the success to the team effort of the community coupled with support from City Hall where permits to move dining outdoors have been expedited.

Convoy District Partnership leaders said about half of the eateries have expanded their operations to outdoors with more on the way. They said the area has almost become another night market, resembling the community’s signature, cultural event.

“The business owners in the area know we are in this together,” Nguyen said. “We aren’t competing against each other. We want to grow this community together.”

“People are being more creative and active in finding other means to keep their businesses afloat," said Tim Nguyen, co-chair of the Convoy District Partnership. "There's definitely more collaboration than before in the API community."

Despite the economic and social challenges posed by COVID-19, Convoy District leaders and business owners have one thing to smile about: After nearly four years, the Kearny Mesa Planning Group, a city board, approved an update to the community plan.

The plan, which is expected to go before the City Council in the coming weeks, will revitalize and modernize the area to allow for more people to enjoy the Convoy District, leaders said.

"It will result in the change that we need to bring more people to the area," said Vasquez, who also serves on the Kearny Mesa Planning Group. "We are going to have a very contemporary district that caters to locals and tourists alike. People are going to want to come to Convoy."

A more open and inviting Convoy District might also allow for the public to learn more about the Asian American community.

For now, Chan said he’s just focused on keeping his business afloat for his employees and customers.

“We can’t waste our time with ignorance,” he said. “I do hope, in the future, we will see more inclusiveness. It will change with the plans to modernize the Convoy District — more people will get to experience it.”