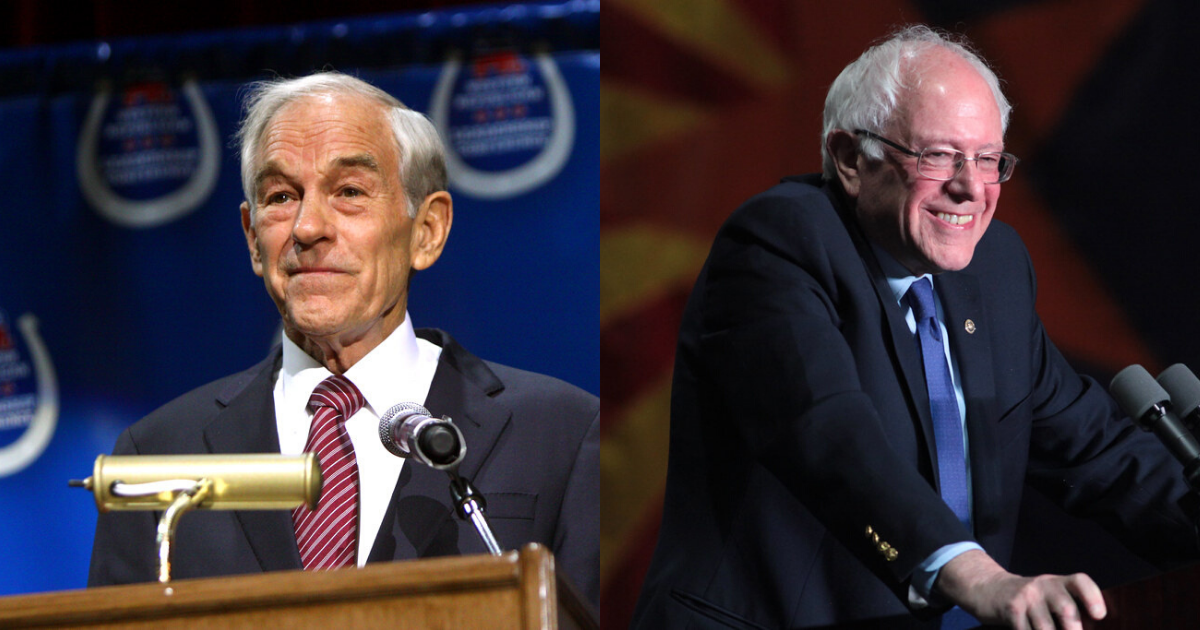 The Brain of an Independent, from Ron Paul to Bernie Sanders

It was nearly four years ago that voters did the unthinkable.

They rejected the party establishments’ favored candidates. And they did so to pick literally Donald Trump as America’s next president. That decision by the electorate completely blindsided Washington political operatives and the mainstream media analysts.

How could Donald Trump have beat Jeb Bush for the Republican nomination in the first place? And then Hillary Clinton for the Oval Office?

Trump was a total political outsider.

His campaign was not very professional or well organized. He spent less money than his opponent in the general election. He had a very unusual personality, and possibly the least suitable personal history and temperament imaginable for success in US politics. He almost couldn’t muster any utterance at all without it causing a scandal.

And yet he prevailed at the ballot booth in the primary and the general.

There’s an Independent Streak Running Through 2020

Four years later, that independent streak is still moving through the electorate like an inscrutable force of nature. It’s the force animating the most energized campaigns. It’s the wind in the sails of the candidates that shouldn’t win, the ones the parties and the media didn’t pick to win.

In 2020, voters are still bucking the party establishment candidates like fmr. Vice President Joe Biden and Sen. Kamala Harris. With the Iowa Caucus less than a month away, the independent socialist democrat, Bernie Sanders has surged to within reach of frontrunner status in the Democratic Party’s presidential nominating contest.

Two years ago, the Justice Democrats (founded by Bernie people) primaried their own party’s incumbents in the midterm election. They knocked out a very senior Democratic House member and gave his seat to a completely unknown millennial activist, Alexandria Ocasio-Cortez.

The Brain of an Independent

What makes the brains of independents different?

And why are they resonating with voters now more than ever before? Here’s a look inside the brain of an independent, from Ron Paul to Bernie Sanders.

What you’ll notice along the way, is the independent candidates say the things a large segment of voters are thinking, but that no one else in politics or the media will say. And that whatever gives them this rare ability, also seems to endow them with weird personalities.

The soft-spoken, yet somehow stern Ron Paul was very quirky. Donald Trump is bizarre on a cosmic level. Alexandria Ocasio-Cortez is delightfully daffy. Bernie Sanders seems just as kooky as Ron Paul, and also just as sincere, passionate, and incisive.

The Internet Changed Everything

Another major thread running through this story is the Internet. It really has changed everything in an epoch-setting way. Politics is certainly no exception. This independent moment in U.S. politics has been heavily shaped by the forces unleashed through the Internet.

The World Wide Web has created a marvelous infrastructure.

It has allowed the free, open, transparent, permissionless participation of everyone in the political discussion on the pages of a vast, hyperlinked digital archive

It shouldn’t be surprising that so many independent minded candidates are emerging now, and raising independent movements that coalesce spontaneously and organically, outside of the conventional channels of political power.

Our story actually begins before Ron Paul made waves in the 2008 and 2012 Republican primaries. Way back in 1998, a total political outsider with no party affiliation used the early Internet to mobilize a campaign that swept him into the Minnesota governor’s office.

Of course, I’m speaking of former pro-wrestler Jesse Ventura. His radio ads spoke to the people directly, and wandered off the typical political talking points:

“I believe Minnesota should return the entire $4 billion tax surplus to the hard working people who paid it in. I believe Led Zeppelin and the Rolling Stones are two of the greatest rock bands ever.”

Radio helped Ventura out a lot because he couldn’t afford television placements like the main party candidates. But as the New York Times reported after his victory made national headlines, the “Former Wrestler's Campaign Got a Boost From the Internet.” The Times called it, “a victory that some attribute to effective use of the Internet as a tool for mobilizing volunteers and voters.”

Here’s why they had the Internet to blame for the electoral surprise:

“In addition to maintaining a Web site, which featured daily photos and updates, the Reform Party candidate's campaign relied heavily on e-mail to organize and galvanize thousands of volunteers throughout the state. Ventura, a colorful figure whose victory made national headlines this week, embraced the medium from the very beginning of the low-budget campaign.”

That stunning 1998 upset was a hint of the Internet-powered, independent voter deluge on the horizon. Even more amazing things were about to happen next.

A decade after Jesse Ventura won his governor’s race as an independent candidate, a GOP congressman with a very independent streak made waves in the Republican presidential primary. Texas Rep. Ron Paul caucused with the Republican Party, and ran for his 20+ terms in Congress as a Republican.

But he was one of the most fiercely independent legislators in U.S. history. The former gynecologist developed a reputation in Washington as a frequent lone “Nay” vote, even on bills popular with his own party. His obstinance earned him the nickname “Dr. No” on Capitol Hill.

He ran for president in the 2008 primary, as a little-known representative with no major legislative accomplishments to speak of. And something amazing happened.

Independent minded voters-- Democrat, Republican, third party, and non-affiliated-- who liked Ron Paul’s principled approach to lawmaking, and his wonkish, free market vision of public policy-- found each other on the Internet and began organizing a movement together.

When people heard him speak on the debate stage, with authority and conviction, the voters who liked his message were able to Google him to learn more. Many of them got drawn into the “Ron Paul Revolution.” Here’s a piece of Ron Paul’s mind:

“We have allowed our nation to be over-taxed and over-regulated and over-run by bureaucrats. The Founders would be ashamed of us for what we are putting up with.”

The amazing thing was his campaign didn’t orchestrate it. They were surprised by it. The money bomb was planned and promoted by a grassroots supporter Paul had never met.

Ron Paul didn’t win his party’s nomination, but his movement scored some substantial political victories. His supporters proved his ideas were popular. And after his “failed” campaign for president, Paul was able to accomplish something he never had before over several terms in Congress. He got the House of Representatives to pass his bill to audit the Federal Reserve.

And two years after his White House bid, Ron Paul’s son, Rand Paul ran for the U.S. Senate in Kentucky. Riding the independent Tea Party wave brewing in politics (because of Ron Paul’s influence), the younger Paul defeated the Senate GOP’s handpicked favorite in a landslide primary win. He went on to become one of the most consequential US Senators in the last decade.

Over the next decade the Internet reached scale in the United States. Today we all have the Internet in our pocket. Popular political movements with an independent streak continued to gather mass. The Ron Paul Revolution of 2008 and the Tea Party of 2010 were only stirrings of the political earthquake that shook the world in 2016.

Secretary of State Hillary Clinton was next in line to get the Democratic nomination that year, but Sen. Bernie Sanders nearly had her beat. The following year, interim DNC Chair Donna Brazile published a bombshell tell-all book revealing how far the Clinton’s campaign and the party leadership had gone to rig that primary to keep Sanders from winning.

But it wasn’t enough to get Clinton into the White House. Almost no one thought Donald Trump could beat Hillary in the November election. The Washington Post says he won by using one of the two parties as a vehicle to deliver an independent candidacy to the electorate:

“Trump took the elements of an independent candidacy — the lack of clear ideology, the name recognition of a national celebrity and the personal fortune needed to fund a presidential campaign — and then did what no one seemed to have thought of before. He staged a hostile takeover of an existing major party.”

In 2020, it’s looking more and more likely that Bernie Sanders will have his chance to clash with Donald Trump at the ballot booth. That would be very interesting given the surprising amount of overlap in support between the two members of opposing parties.

The Washington Post found as many as 20% of Sanders supporters also supported Trump in 2016. During that election, Sanders summarized his political message by saying:

“The next time you hear me attacked as a socialist - like tomorrow - remember this: I don't believe that government should take over the grocery store down the street or control the means of production. But I believe that the middle class and the working families who produce the wealth of America deserve a fair deal.”

Sanders is surging even though he’s a fiercely independent Democrat. Though he caucuses with the Democrats, and has sought their nomination for president twice now, he is technically non-affiliated.

And he’s voted against his own party's leadership more than other Senators who ran in this race. Many of the others, like Sens. Kirsten Gillibrand, Kamala Harris, and Cory Booker have already had to shut down their campaigns for lack of support.

Even though Joe Biden has held a consistent lead in the polls this time around, Bernie Sanders is winning the fundraising primary. According to FEC filings available on Open Secrets, he’s raised more than any 2020 candidate except Donald Trump.

In the fourth quarter of 2019, his fundraising surged. Sanders hauled over $34 million for the quarter. Soon after he moved to first in early polling for the Iowa Caucus for the first time. Meanwhile he’s filling arenas, while Joe Biden gets heckled in junior high school gymnasiums.