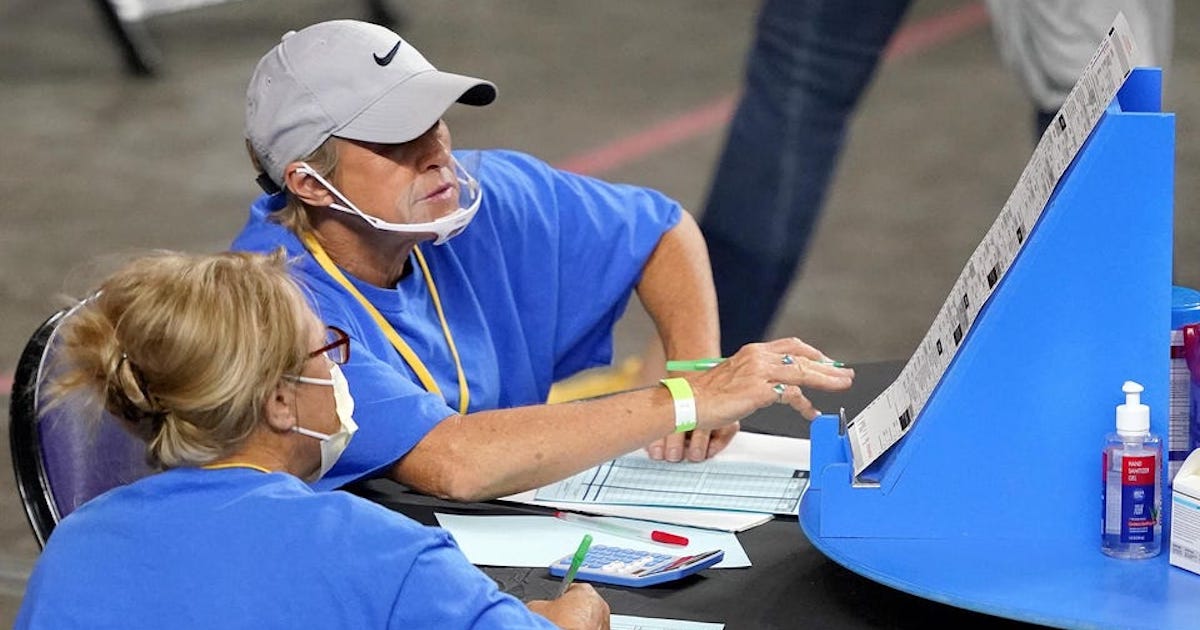 The Ballot Count in AZ's Audit Is Complete: Here's What Is Happening

It is hard to believe that 9 months after the 2020 election, we still aren’t completely done with it. Well, we are. The election results are certified. It’s a done deal at this point.

However, there are still calls from some to continue to audit vote tallies in critical battleground states. One audit in Maricopa County, Arizona, is being decried as a sham on one side, but on the other side is being used to build a movement for more audits like it.

Arizona State Senate President Karen Fann says that after three months, the hand-count of millions of ballots is complete and county elections officials can retrieve the ballots and voting machines that were taken under a Senate subpoena.

Former President Trump praised Arizona Senate leaders for being “brave and unyielding” for moving forward with the Maricopa audit. The US Department of Justice under the Biden administration, meanwhile, has suggested the audit may have violated federal law.

The dragged-out process has largely been viewed as a chaotic mess, and has even divided Republicans in the state. However, on a much broader scope, it shows the increasing concerns of partisan actors having control of the administration and oversight of elections, particularly in a hyper-polarized political environment where winning is the only thing that matters.

According to Fann, ballot counting in the audit is complete. However, the Arizona Senate just issued two new subpoenas that indicate the political and legal fight over the audit is far from over.

The first subpoena was for Maricopa County Registrars to turn over the envelopes from mail-in ballots or photo copies of them, county servers and traffic logs, detailed voter registration, and records on security breaches of election systems. They also must appear before the state Senate or face Contempt of Legislature.

The second subpoena was issued to Dominion Voting Systems demanding that the auditors contracted by the Senate, Cyber Ninjas, be given administrator-level access to all tabulators used by Maricopa County. Dominion has for months refused to provide this level of access to what the company calls an “unaccredited, biased, and plainly unreliable actor.”

Meanwhile, the Senate liaison of the audit and former Arizona secretary of state, Ken Bennett, vowed to resign from his post after he was barred from the building where the audit was being conducted for sharing some of Cyber Ninjas’ data with outside experts. And, new reports indicate that the audit, which has gone on way longer than expected, could end up costing state taxpayers over $9 million.

To break that down, Arizona already will have to replace its voting machines over concerns that Cyber Ninjas, a software security firm, could not ensure the machines were not compromised during the audit process. However, if Maricopa County has to turn over its servers, that will reportedly be another $6 million to replace them if similar concerns arise.

Here’s the thing: This isn’t the first audit conducted in Maricopa County. In fact, Maricopa conducted a hand recount/early ballot audit the day after the 2020 general election in accordance with state law. Representatives from the Republican, Libertarian, and Democratic Parties participated in the recount of over 5,000 early ballots.

This, however, was not enough for some to close the book on the matter. In April, the Arizona State Senate took possession of 2.1 million ballots and 400 voting machines in Maricopa County by subpoena. Senate leaders then hired Cyber Ninjas, a company with no experience in this area, to conduct the audit.

This also occurred after Cyber Ninja’s CEO, Doug Logan, wrote a report for Republican US senators who wanted to object to the certification of Electoral College votes supporting election fraud claims.

The Maricopa County Board of Supervisors, which was composed almost entirely of Republicans, objected to the audit, and called for it and other additional audit attempts to end.

The Maricopa County audit was initially slated to take about 60 days. Counting the ballots was supposed to take a couple of weeks -- with the initial deadline being May 14 -- and then by two-month’s time Cyber Ninjas would release a report on their findings.

The audit, however, has far exceeded this timeframe, and even some Senate Republicans who initially supported the audit are now coming out against it over the way it has been conducted.

“I wanted to review our election processes and see what, if anything, could be improved. Sadly, it’s now become clear that the audit has been botched,” tweeted Republican State Senator Michelle Ugenti-Rita.

Even now that the count has reportedly finished, it will be weeks before Cyber Ninja releases its report, which will no doubt cause further divide and controversy on the subject of election administration going forward.

It is worth noting that the Maricopa audit is being used as a model to follow by some state lawmakers in other states, like Wisconsin and Pennsylvania, despite the many reported problems by observers and the delays.

What I provided above is a brief overview of the audit in Arizona. The entire thing has been marred in controversy from the start, not just because of the choice of auditor, but because of the unorthodox methods used during the audit, an initial lack of transparency, and multiple lawsuits.

Meanwhile, a sizable percentage of Americans -- 1 in 3 according to recent polls -- still believe there was widespread fraud during the 2020 election, and even though there is no evidence of it -- and previous audits and recounts show this -- there now exists a crisis in the American democratic process.

I have already written some about the biggest underlying threat to election integrity. This threat is not coming from the tools by which elections are administered (e.g. mail-in ballots, vote tabulation, etc.). The threat is coming from the fact that we have a system designed explicitly to serve the Republican and Democratic Parties.

When a system is controlled by two private, gain-seeking organizations, the processes by which that system works become solely about who gains and who loses between those two sides. It is a zero-sum contest where “my side” has to win and the “other side” has to lose at any cost. And this is where the threats to our elections lay.

If the aftermath of the 2020 election revealed anything to voters it is that, fraud or no fraud, there is an inherent conflict of interest when partisan-elected officials administer and oversee the elections process. It is akin to letting baseball players call their own balls and strikes.

Or, in cases like Arizona, when the balls and strikes don’t go their way, they insist on subjecting the game to endless scrutiny all because their side didn’t win. This not only helps create an environment of mistrust, but it invites malicious actors who would exploit the system for their own gain.

Elections are supposed to serve voters. Our political system is supposed to be “of, by, and for the people.” But we don’t have that. We have a system accountable to the parties, not the voters, and as a result we cannot even go through an election cycle without the outcome of said election being challenged and protested for months after its over solely because the only thing that matters is winning.

If we want a system that promotes integrity then we need a truly nonpartisan system, not just in terms of how elections are conducted but how those who administer and oversee our elections are chosen. It may not stop all attempts to undermine elections, but it would help take the bullets out of the guns of those who would exploit and manipulate the current system for their own benefit.