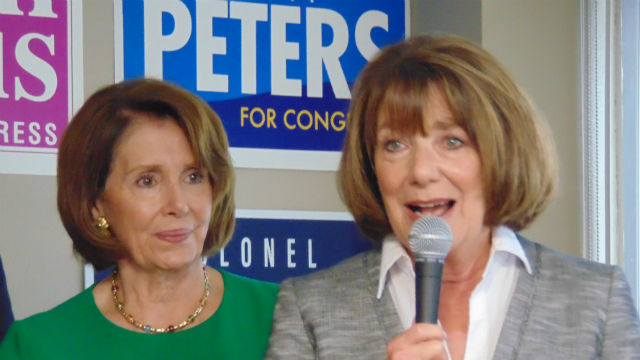 San Diego, Calif.- Congresswoman Susan Davis was one of the members entangled in the President Trump/House Speaker Nancy Pelosi feud over the government shutdown and cancelled overseas trip.

President Trump cancelled the delegations overseas trip at the last minute while the government is partially shutdown.

Davis was part of the delegation that had loaded onto a bus operated by the U.S. Air Force for the drive out to Joint Base Andrews. Instead, the bus drove lawmakers to the East Plaza of the Capitol, where members disembarked from the bus and walked into Speaker Pelosi's office.

“For a president to cancel and leak the details of a Speaker’s trip to a war zone is beyond reckless. The importance of confidentiality until members and those accompanying safely returned from their mission is paramount. Not only did he and his staff endanger the Speaker and other members on the trip, but he also endangered our troops, security personnel, and the other travelers on our flights. It's appalling that the Commander in Chief who is supposed to protect the American people is the one putting us in danger.”

House Speaker Nancy Pelosi is now asserting that President Trump and his administration endangered the lives of Americans, including her own, by publicly revealing a congressional delegation’s travel plans to Afghanistan.

“We had the prerogative to travel commercial and we made plans to do that until the administration leaked we were traveling commercially and that endangers us,” Pelosi told reporters in the U.S. Capitol midday Friday. “We weren't going to go because we had a report from Afghanistan that the president outing our trip had made the scene on the ground much more dangerous because it's just a signal to the bad actors that we're coming.”