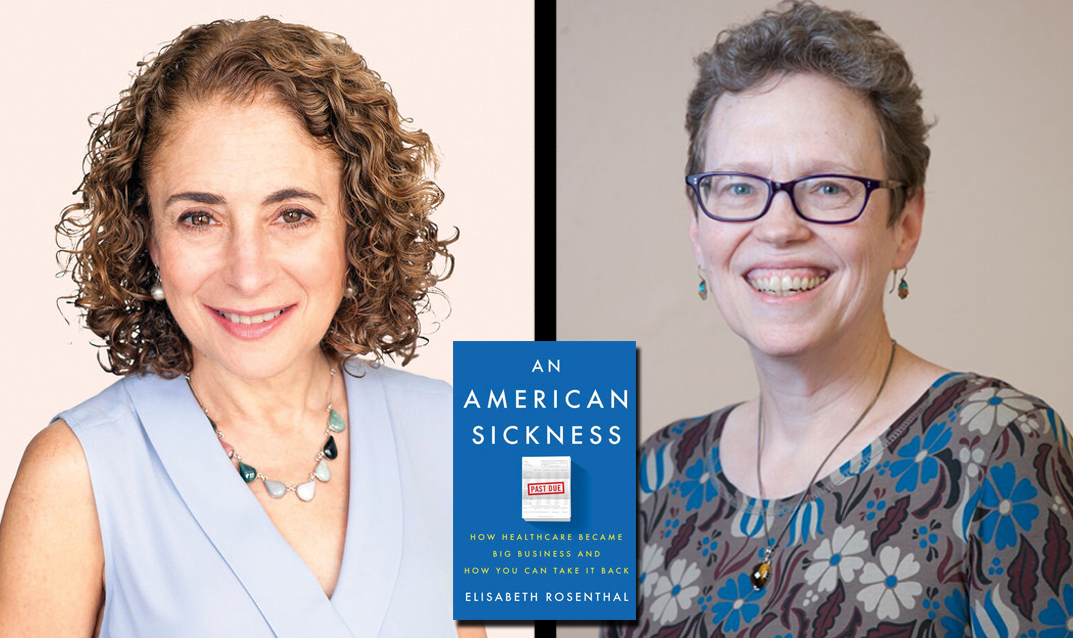 REVIEW: “An American Sickness: How Healthcare Became Big Business and How You Can Take It Back”

Dr. Elisabeth Rosenthal is a journalist, author, and former medical practitioner. She was kind enough to join Independent Voting’s Vice President for National Development, Cathy Stewart, for her Politics for the People Book Club in December to discuss her book, An American Sickness: How Healthcare Became Big Business and How You Can Take It Back.

Dr. Rosenthal’s expansive experience in the medical field — both as a doctor and as New York Times journalist and Editor-in-Chief at Kaiser Health News — provided book club members with professional, insider knowledge on the industry that has become one of the country’s largest partisan issues.

Dr. Rosenthal told us that in working on the book she “…dug into each area of health care to see for myself really how it came to be that we put profit on the front burner and health on the back burner.”

The goal of Dr. Rosenthal’s book is not to delve into the politics that need to change for a better health system, but to give its readers the proper tools to prepare for and defend against outrageous industry practices that often lead to unaffordable medical bills.

But book club members still wanted to discuss the politics of the flawed health care system, and Rosenthal acknowledged that the solution to our health care crisis will be a political one:

“I’m not talking Republican, or Democrat, or independent—I think whatever politician successfully brings down drug prices is going to be a vote-getter.”

Dr. Rosenthal shared her view that:

“A lot of people in the medical community are just so fed up with this system. They want something different. Why do people go into medicine, especially today? Not because you think you’re going to make a lot of money, because who knows what the medical system is going to look like in ten years. But because they want to want to do what doctors have always done — they want to care for patients.”

Because Dr. Rosenthal’s book deals with the flaws of the medical industry, health insurance, and hospital for-profit practices, she often gets asked if her book is anti-physician. Her response? “I think, ‘Not at all.’ It’s anti-physicians that are gaming the system for profit.'”

"I’m not talking Republican, or Democrat, or independent — I think whatever politician successfully brings down drug prices is going to be a vote-getter." - Dr. Elisabeth Rosenthal

Reverend Carl McCluster, an independent organizer in Connecticut, spoke of how many of his parishioners are suffering from high medical and drug costs. Reverend McCluster asked Dr. Rosenthal for three possible steps that advocates could take to push back against the medical industry.

Dr. Rosenthal suggested being aware of whether one’s state has a surprise billing law, and recommends that people, when signing consent forms at the hospital that say they will pay for anything their insurance doesn’t cover, indicate that they will do so only if the procedures are in network.

She also says that it could be useful for people to go to their local hospitals and ask for price lists for different tests so that they can compare fees. Sometimes, Rosenthal says, getting tested directly at a lab is cheaper than doing so at a hospital.

Her last bit of advice is to try and put political pressure on your state insurance commissioner to offer basic consumer protections. “I think it’s a tragedy that in our country, many people are spending more on health care than on their rent or mortgage,” Dr. Rosenthal said.

Cathy Stewart and Dr. Rosenthal wrapped up the conversation on a note of hope for change and reform.

“I tell everyone when I go talk to hospitals,” Dr. Rosenthal said, “just do something. Do something in whatever space you exist to start changing things because I think that’s how empowerment starts.”

I encourage everyone to take a listen to the full conversation over at the Politics for the People blog.

Editor’s Note: This month’s guest columnist is Kayla Shifter. Kayla is an administrative assistant at Independent Voting, a writer, and an artist.

Cathy L. Stewart has been a political activist in the independent movement since the mid-1980’s. She is the Vice President for National Development at Independent Voting and the founder and host of Politics for the People.