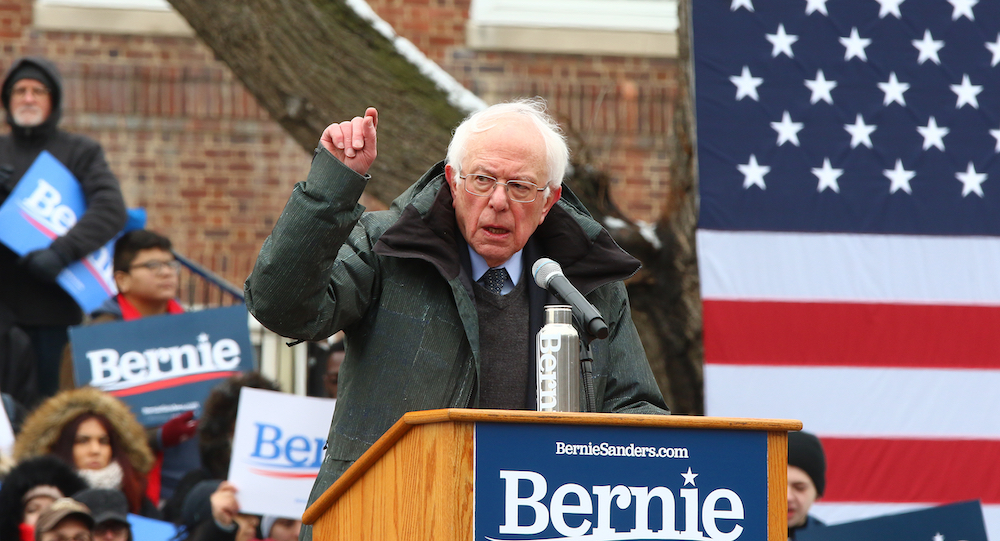 Poor Bernie Sanders. It’s not enough that he had the balls to challenge The Anointed One in the Democratic Party primary in 2016. It’s not enough that in doing so he split open a divide in his party that makes the San Andreas Fault look like a crevasse you could hop, skip or jump over wearing a sturdy hiking shoe. That Sanders did these things has already earned him a special place in the history of American progressivism.

But now, Sanders is in the race for the 2020 nomination, no longer a long shot insurgent, but a presumptive contender. And that makes things a lot more complicated for him.

Bernie is on the cover of TIME magazine this week. This used to be a really big deal. TIMEwas the official arbiter of history-makers, usually for good, sometimes for evil. Nowadays, with magazine reading a lost art, like candle making or blacksmithing, it means much less. But nonetheless, it is still a barometer of liberal journalism’s sensibilities.

This week’s cover features a hyper-realistic closeup, Bernie with sparkling (literally!) white teeth, dressed in a conservative suit jacket and dark tie, of course with slightly mussed hair, gazing off into a distant utopia.

Four years ago, TIME had him on the cover looking straight into the camera, in green shirtsleeves rolled up to his elbows, hands on his hips, a pen in his shirt pocket. Was that the old Bernie, the man who could never be president but who would fight for you on the factory floor? That edition of TIME is selling on eBay for $9.50. The new Bernie, according to TIME, could be president. He would know to wear a suit.

Now the issue is whether Bernie can win. Pure and simple. TIME has a way for Bernie to win. Bernie has to change. Not his positions. Not his rhetoric. Not his politics. According to author Anand Giridharadas, he has to become more human. He has to talk more about himself, about where and how he grew up, about how he feels about the hardships and pain suffered by ordinary Americans.

As Giridharadas put it, “Among the many differences between the front runner for the Democratic nomination, Biden, and Sanders, who sits in second place, is whether the performance of humanity still matters in politics.” And later he asks, “Can the warrior for justice learn to be open, adaptive and human in ways that give his message a wider airing?”

Poor Bernie. He’s now supposed to “perform” as a human being. It’s not enough to be one. Even though the hottest commodity in the marketplace of the intelligentsia is “Truth,” Bernie is supposed to be something he isn’t. Is TIME giving away its own political bias here? Is the message “Enough with the socialism already, Bernie. Tell America how you feel!” That’s modern psychology in a nutshell for you.

Sanders just completed a tour of Blue Wall states. That’s the Democrat wall that fell to Donald Trump in 2016. He says he is pursuing Trump voters with a message that emphasizes a commonality of economic interests. In the last century, we called them “class interests.”

But selling this commonality in postmodern times is a tall order since the Democratic Party is caught up in ideological battles (are we “centrist” or “progressive”) and identity battles (over race, gender, sexual definition). Plus, Sanders has another—maybe an even deeper—dilemma.

In some states, his chief rival at the moment, former Vice President Joe Biden, is more popular with Democrats while Sanders has the edge with independents who might vote in a Democratic primary. This sets up a conflict for Bernie. Case in point: an Emerson poll in North Carolina has Biden leading Sanders 42% to 19% among Democrats and Sanders leading Biden 34% to 26% among independents.

Thus, Sanders has to do well (very well!) with Democrats overall, and especially in closed primary states where independents are barred from voting. He has to restrict critiques of his own party to chase Biden among extreme party loyalists who insist upon electability (as defined by the party leadership). This is ironic since Sanders is the one accused of extremism and Biden is considered the anti-extremist alternative. It all depends on how you measure extremism these days, I suppose.

Poor Bernie Sanders. There is widespread belief that Donald Trump can be defeated in 2020.  With the assumption that only a Democrat can beat him, and, at this moment when Bernie is running second in the polls behind Biden, the political and pundit classes are fixated on whether Bernie could lead the Democrats to a victory over Trump or cost them the election.

Taibbi covers a lot of the same ground as Giridharadas. They both document Bernie campaigning in the Blue Wall states. They both excavate the 1980’s studies of Macomb County, Michigan, where an earlier blue wall fell to Ronald Reagan in 1980, enshrining the term “Reagan Democrat.” They both cover Sanders’ ongoing troubles with winning support from Black activists and voters. (The Emerson poll referenced earlier shows Biden polling at 58% among African Americans, Sanders at 14% and Kamala Harris at 7%)

Still, Taibbi has more to say (thankfully!) about the dynamics of the contest than the psychology of the candidate. He notes that Sanders is trying to empathize with Trump voters, not cast them as “deplorables” as Hillary Clinton famously did in 2016. He perceptively observes that the media fascination, by turns, with Kamala Harris, Beto O’Rourke and Pete Buttigieg, “appear as thinly disguised Beltway prayers for someone to knock Sanders out of the race.”

Ironically, while the same issue of Rolling Stone features an engrossing interview with shock jock Howard Stern, who went to therapy and changed his bad behavior, changing Bernie’s persona is out of the question. Taibbi writes “… anyone who’s followed this politician for any length of time knows that both the strength and weakness of Sanders is his relentless sameness … Sanders has only one note, and deviating from it never occurs to him.” But the article’s core question—can a coalition of Trump and Sanders voters transform the Democratic Party—remains unanswered, leaving Rolling Stone gathering moss.

The bonds or commonality of interests between Trump and Sanders voters are not simply economic, as Bernie would have us believe. In 2016, both groups of voters wanted to upend the system—an economic arrangement that privileges elites and a political system which enforces that privilege by protecting institutionalized party power.

For the Democratic Party to now appeal to the Trump voter, it will have to do more than say that Trump lied to them about whether his policies would benefit the working class, Bernie’ s current mantra. It will have to champion deconstructing a system which permits, even encourages, self-dealing on both sides of the aisle. When 5,000 independent voters were asked why they chose to identify as independents, 66% said it was because the two parties had failed and had placed their own interests above those of the American people.

Poor Bernie. By the standard of sheer self-interest, he should be championing the cause of opening all of the Democratic presidential primaries to independents—something the volatile Eyes on 2020 Campaign is pushing in every state where they are closed. Bernie’s young and radical supporters would back this because they believe in a more open system, and almost half of America’s millennials are independent.

But Bernie can only push but so far, because the national party wants everyone who votes to become a Democrat. The Democratic National Committee made Barack Obama sign up for that after 2008, and it cost them the presidency in 2016, when a majority of independents broke for Trump. Requiring independents to sign up as Democrats would be demanding an act of compliance and contrition that most independents—now 40% of the country—will not agree to.

In 2016, there was a voter rebellion inside the two major parties. It carried Bernie from obscurity to the cover of TIME magazine and it elected Trump President of the United States. If that rebellion is to solidify and grow, it will have to somehow break out of the boundaries of party rule.

If, on the other hand, Bernie’s plan (like Trump’s) is to contain it, then he may end up greasing the wheels for Biden. The former Vice President’s capacity to invisibly bridge the divide between blue collar men and the coastal elites is his ace in the hole. Add to that Biden’s connection to Barack Obama, whom he loyally served for eight years, and his resultant strength among Black voters, and the identity politics crowd will come along, even if kicking and screaming “Me, Too!” The die will be cast.

Poor Bernie. Give us in the independent movement a call. We might be able to help.