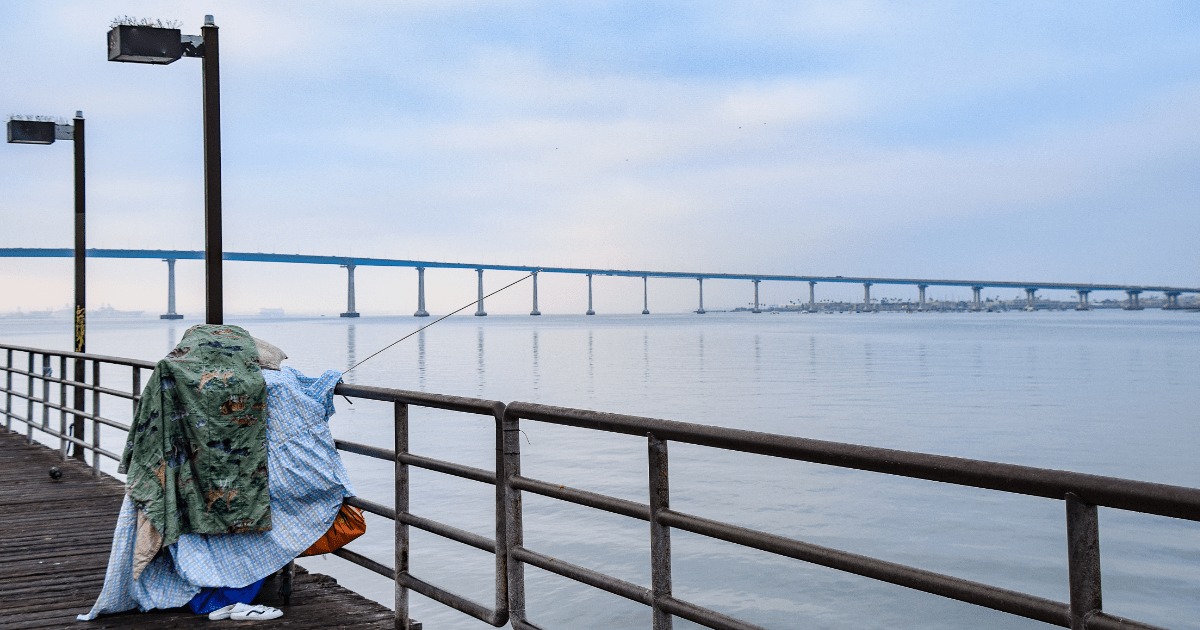 Supporting homelessness causes can sometimes feel like rooting for the Los Angeles Chargers.

Not that San Diegans should feel obligated to cheer for a greedy, mercenary NFL owner who unforgivably ripped the heart out of a faithful community by moving his team to L.A.

Anyone still grasping on to Chargers loyalty, though, has watched recent squads master the art of unlikely last-minute losses. One pundit wrote that the team deserves “a black belt in snatching defeat from the jaws of victory.”

If you’re still a Chargers fan, you can relate to the exasperation of those with sympathy to the plight of people experiencing homelessness in San Diego. Over the decades, there have been small advances and major setbacks. Wins for the homeless community arrive few and far between.

That’s why we should celebrate a couple of recent victories—and keep trying to extend the winning streak.

In October, the San Diego City Council voted unanimously to spend more than $100 million to buy two hotel properties that will be converted to permanent affordable housing.

Many of the future residents—who should be moving in by mid-December and will be supported by “wrap-around services”—are currently being housed during the pandemic at the San Diego Convention Center.

The philosophy of getting people off the streets and into housing, while being served by counseling, is known as Housing First. Unfortunately, the public doesn’t fully support the concept of giving people homes who haven’t “earned” them by first by getting sober or getting a job.

During the San Diego City Council meeting when the hotel purchases were approved, public speakers worried about things like diminished property values. And about the kind of environment that would be created in the neighborhood by inviting in the unsheltered.

These surface-level concerns were debunked by experts and politicians. The former hotels will become permanent affordable housing—not shelters. The wrap-around services will be provided to the residents—not to itinerant people experiencing homelessness.

“On one hand, it’s a natural reaction,” he says. “People fear the unknown. They want to be safe and make sure their family is safe. And that their property is secure. These things all cross peoples’ minds.”

Father Joe’s Villages will do wrap-around services for the new residents at the 142-room former Residence Inn in Kearny Mesa.

The statewide organization PATH (People Assisting the Homeless) will provide the wrap-around support services to the new residents at the 190-unit former Residence Inn at Hotel Circle.

“They don’t understand it, or maybe they partially understand the concept,” says Castillo, who serves as PATH’s chief regional officer.

“Housing First is tried and true,” he says. “There’s research that stands behind it. The traditional continuum of services has not been that effective.”

What’s the traditional continuum? That’s been the model of people going from street to shelter, after demonstrating sobriety and medical and mental health stability. It includes establishing income and proving that you have the ability to save money.

That model has failed because of an inability to recognize that homelessness is a complex reality. It’s hard to escape the streets without a safe space from which to start addressing your addictions and medical/mental health issues.

Support has been slow to materialize, even given the success measured by earlier attempts.

The United Way of San Diego County launched Project 25 back in 2011. This pilot program selected 25 of the most “expensive” people experiencing homelessness (the number actually grew to 35).

The subjects in Project 25 were prone to high usage of emergency medical services and hospital stays. For the study, all were given an apartment to live in and use as a stable environment, where they worked with counselors on issues such as addiction and mental illness.

After three years, the United Way measured the results of Project 25. In just the last year of the experiment, participants took 600 fewer ambulance rides, went to the ER 1,100 fewer times and spent 1,000 fewer days in the hospital.

In that one year, Los Angeles County saw health spending on program participants fall from $31 million to $11 million.

(Note: The program was in no way affected by the arrival of the Los Angeles Chargers.)

PATH offers supportive services at more than a dozen Housing First facilities across California. In an agreement worked out with San Diego’s Housing Commission, PATH will have a $2.8-million annual budget for managing and providing on-site services at the Hotel Circle property.

A key factor in success, according to Castillo, is having services available onsite.

“That’s absolutely critical when you're providing services to the people living in these apartments,” he says. “Everybody has unique needs. Having supportive services onsite allows us to respond quickly—and also allows us to get to know the clients better.”

Along with onsite property management, the team will include case managers, clinical case managers and an activity coordinator.

“The model gives clinical case managers more behavioral health oversight,” Castillo says. “It lets us individualize our services, and gives us the ability to assess for behavioral health needs and provide additional support when needed.”

Unlike the property manager, case managers won’t live onsite. But support services will be staggered throughout the day. Hours will extend after the traditional 9-to-5 workday—especially for clients with jobs.

“Our goal is to promote client health and wellness and long-term sustainability in their apartment,” Castillo says. “It will be very individualized. Some people need to be focused on making sure they’re getting primary care. Others, we’re helping them secure income. Whether it's a disability versus employment for some, it might be getting them connected to behavioral health services. For others, we may simply be helping them get connected to the community.”

Father Joe’s Villages has a $2.1-million budget for providing supportive services at the Kearny Mesa.

That funding goes to property management and security, as well as accesses to “soup-to-nuts” services that Father Joe’s has provided to the local homeless community for decades.

“We’re blessed that anything that an individual who is homeless needs, we can provide,” Vargas says. “We don't have to send them elsewhere. We have a federally qualified health center that provides physical wellbeing and mental health services. And substance-use disorder treatments. We also provide dental services.”

Residents at the Kearny Mesa facility will each be connected to a caseworker. Those caseworkers are available to meet on a regular basis—be it several times a week, weekly or monthly.

Vargas adds that in addition to health services, case managers can help clients with vocational training resources in an employment center.

“We can equip people with skills that will make them marketable,” Vargas says. “Whether its culinary arts, security guard training, welding—over time we’ve had conversations with business leaders to see exactly what they’re looking for.”

I was curious if one of the goals is to get people’s lives balanced, help them find a job and have them move out so the unit can be occupied by the next person who needs the Housing First treatment.

“That’s possible,” Vargas says. “Keep in mind, these aren’t viewed as stepping stones. The key goal with many individuals is simply for them to retain the unit. That’s paramount. And we’ve been successful in that regard—95 percent of individuals retain this type of permanent housing long-term, or multiple years.”

Both Father Joe’s and PATH are actively working to build and/or acquire more Housing First facilities. More power to them. It’s time to go on the offensive.

There’s a noticeable dearth of affordable housing in San Diego, and in the state. Homelessness seems to get the most attention when a major catastrophe looms, i.e., the hepatitis A outbreak in 2017 and, of course, the coronavirus pandemic of 2020.

It’s a daily societal issue, however.

Whether or not you care if the Los Angeles Chargers continue to drop the ball, it’s imperative the political football that is homelessness gets supportive management. Lots of talented players in this field know where the end zone is—and need more than the occasional Hail Mary of funding to get us there.