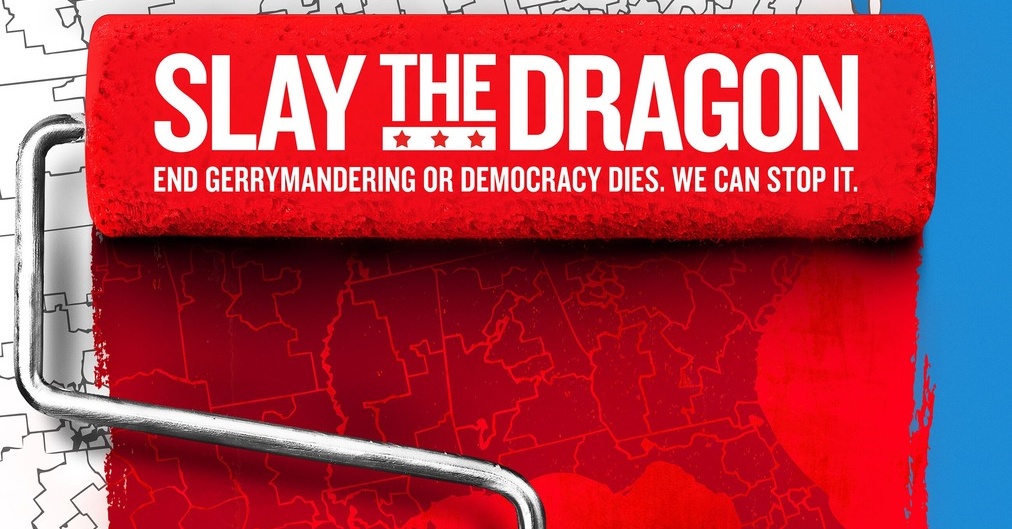 How to Slay a Dragon

I recently had the pleasure of watching Slay the Dragon, Barak Goodman and Chris Durrance’s stunning documentary on the fight against partisan gerrymandering in Michigan and Wisconsin. It played before a full house at Betaworks Studios in lower Manhattan.

The film tracked parallel efforts in the Courts and on the ground. In Wisconsin a group of Democratic Party activists put together a high-powered legal team to sue in federal court, arguing that in 2011 the Wisconsin legislature enacted a redistricting scheme that disadvantaged Democrats.  The measure of the disadvantage was the disparity between the vote gotten statewide by Democratic Party candidates and the number of seats the party won in the State Legislature in the 2012 election. The case succeeded in the lower courts but was reversed by the U.S. Supreme Court on the grounds that the plaintiffs lacked standing. Gill v. Whitford, 138 S. Ct. 1916 (2018).

Across Lake Michigan, Katie Fahey put together a grassroots effort to place a referendum on the ballot to establish a non-partisan redistricting commission. Fahey, a political novice, launched her campaign with a Facebook post asking others who thought gerrymandering unfair to join in doing something about it. The documentary takes us from the “kitchen table” drafting of the language of the initiative, to the approval of the ballot language by the Board of State Canvassers, to the statewide volunteer petition drive that netted 425,000 signatures, to an effort to block the initiative in Court that failed when the Michigan Supreme Court voted 4-3 to allow it on the ballot, to the on-the-ground campaign that won a majority of 60% at the polls in November 2018.

My favorite scene is when a U-Haul truck pulls up outside the office of the Michigan Secretary of State and volunteers line up to pass boxes full of petitions from hand to hand into the filing office. The grit and enthusiasm of this up-from-the-bottom effort is captured in Katie’s tears when she learns that the political parties went to court to challenge the ballot language and the joy of the election night victory party.

The legal strategy begun in Wisconsin did not fare so well.  In 2019 the US. Supreme Court heard a second gerrymandering case Rucho v. Common Cause, 139 S. Ct. 2484 (2019). There, the Court held that gerrymandering posed a political, not a legal question. Chief Justice Roberts wrote for the majority:

“Excessive partisanship in districting leads to results that reasonably seem unjust. But the fact that such gerrymandering is ‘incompatible with democratic principles,’ Arizona State Legislature, 576 U. S., at ___, 135 S. Ct. 2652, 192 L. Ed. 2d 704, 716, does not mean that the solution lies with the federal judiciary. We conclude that partisan gerrymandering claims present political questions beyond the reach of the federal courts. Federal judges have no license to reallocate political power between the two major political parties, with no plausible grant of authority in the Constitution, and no legal standards to limit and direct their decisions. ‘[J]udicial action must be governed by standard, by rule,’ and must be ‘principled, rational, and based upon reasoned distinctions’ found in the Constitution or laws. Vieth, 541 U. S., at 278, 279, 124 S. Ct. 1769, 158 L. Ed. 2d 546 (plurality opinion). Judicial review of partisan gerrymandering does not meet those basic requirements.”

Slay captures the difference in the two approaches to confronting the “dragon.”  The Michigan effort was non-partisan both in the outcome it sought (the non-partisan redistricting commission) and the character of the campaign whose slogan was “Voters not Politicians.”  The appeal was to fairness – let the voters decide, not the political professionals who seek to overdetermine outcomes by “packing” and “cracking” voters into districts that serve their partisan ends. In Michigan and elsewhere, that meant blunting the strength of the opposition party by concentrating their voters in a few districts while spreading out the vote of the favored party so it could win more districts, albeit, by a narrower margin,

The question posed by the Fahey campaign was one of fairness and democracy (with a small “d”) in contrast to asking the courts to redress the consequences of allowing the Republicans (or Democrats) to dominate state legislatures with the power to implement computer generated gerrymandering that ensured they would continue their governmental control.  One can understand why the disadvantaged party would want to undo the damage. I agree with Chief Justice Roberts that the federal courts do not have  authority to do this for them.

That is the unstated but brilliantly portrayed message of Slay the Dragon. This is one lesson to be learned from Fahey and her volunteer army.