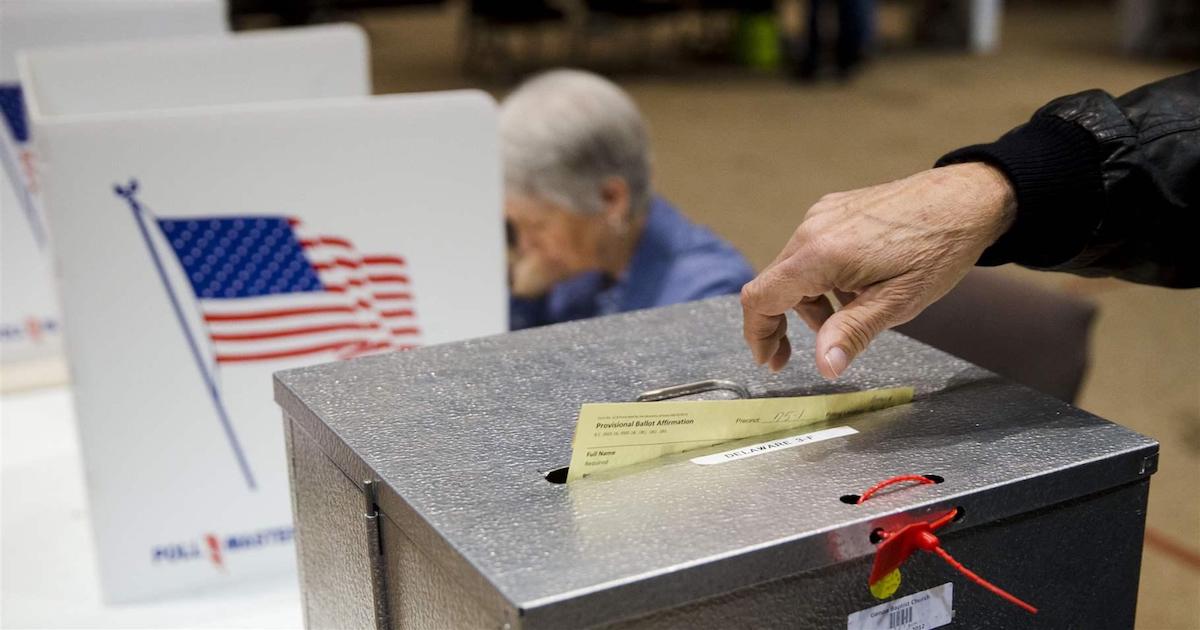 While $400 million in federal funds has been allocated to make voting safer during the coronavirus pandemic, local election officials and good-government groups say that's not nearly sufficient. In fact, spending all the money in just five bigger states would not even cover their necessary expenses.

That was a central conclusion of a report, co-authored by liberal and conservative think tanks and released Thursday, designed to buttress the case that both parties in Congress should get behind sending many hundreds of millions more — and fast.

To illustrate the pressing needs nationwide to assure a healthy and complete election in November, the authors focused on five states where Republicans control levers of power and were carried by President Trump in 2016.

Three are the major Midwest battlegrounds of Michigan, Pennsylvania and Ohio. The fourth is Georgia, which the GOP sees as newly competitive in the presidential race. The last is Missouri, which is not a purple state but is the home of Roy Blunt, a member of the GOP Senate leadership and a central player in negotiations on election funding.

The five states' share of what Congress appropriated in March, as part of a $2.2 trillion economic rescue package, would cover just 20 percent of their costs. They have received a combined $57 million, but the study said their needs total $414 million.

Presidential elections are already expensive, but the public health crisis has exacerbated the costs. Officials are now preparing for a huge jump in voting by mail, meaning more money must be spent on printing, postage and envelopes as well as sorting and counting machinery. Many also hope to expand in-person early voting to keep Election Day crowds at a minimum, and they will be pressed to assure all polling places are sanitized and poll workers are protected.

And local jurisdictions, not the states, are responsible for most of these expenses — 81 percent of them in the five states studied. So far, though, all the federal aid has been sent to the state capitals.

House Democrats have rallied behind a bill to deliver $4 billion more. Trump has pushed congressional Republicans to oppose additional subsidies, and in any case it's unclear how quickly the next Covid-19 response bill will get negotiated.

"Without funding from the federal government, there is little chance that state and local governments can shoulder the financial burden," concluded the report, prepared by the progressive Brennan Center for Justice, the generally conservative R Street Institute, the bipartisan Alliance for Securing Democracy and the University of Pittsburgh. "Indeed, nearly every state and local government in the country faces severe budget challenges this year."

The state-by-state details on the election costs calculated in the study:

Georgia. The state will hold as many as five elections in the next nine months: June 9 state, congressional and local primaries; runoffs Aug. 11; the general election Nov. 3; and possible runoffs for state posts Dec. 11 and congressional races Jan. 5. Officials estimate their total cost could top $111 million, with local jurisdictions responsible for 61 percent of the expenses. Of the five states, Georgia faces the biggest shortfall — because its grant from Congress so far is just $11 million.

State officials have taken some of the burden off local offices by sending postage-paid absentee ballot applications to all 6.9 million active registered voters. But one of the heftiest costs local officials will have to handle is voter education and outreach, which is priced at $21 million.

Michigan. Officials are preparing for separate local and primary elections before the November finale. Local officials will need to cover 86 percent of the $95 million bill. The federal funding so far has been $11 million — or one-eighth of the total need.

This year is the first time Michigan's 7.7 million voters won't need an excuse to vote absentee, and election officials are expecting an enormous increase in voting by mail. Processing and tabulating these ballots from 1,600 precincts will cost at minimum $45 million.

Missouri. Holding municipal contests, the primary and the general election will cost $59 million at a minimum — and Congress has so far covered just 13 percent of that. But state election officials will only be covering an infinitesimal 1 percent of this amount, the rest getting covered by local budgets.

While the state does require an excuse to vote by mail, officials are expecting more to request absentee ballots because of the coronavirus. Mailing, processing and tabulating these mail-in ballots will be the largest expense at $29 million.

Ohio. While the state held its first vote-by-mail primary Tuesday, the report estimates it will need at least $70 million to cover the upcoming special and general elections, and the help from D.C. will take away one-sixth of the burden. Local jurisdictions will be responsible for 94 percent of the expenses.

A huge portion — $40 million — is earmarked for mailing, processing and tabulating absentee ballots, with $8 million of that for more high-speed scanning equipment. Communicating with 7.7 million voters will cost another $5 million, and creating safe in-person voting options $13 million.

Pennsylvania. The June primary and general election will cost at least $79 million combined and the state government will provide 22 percent of that. The federal aid so far has covered 18 percent of the expenses.