Up Next
...
Courts Will Protect the Voting Rights of Party Members, But Why Not Independents?
Read More 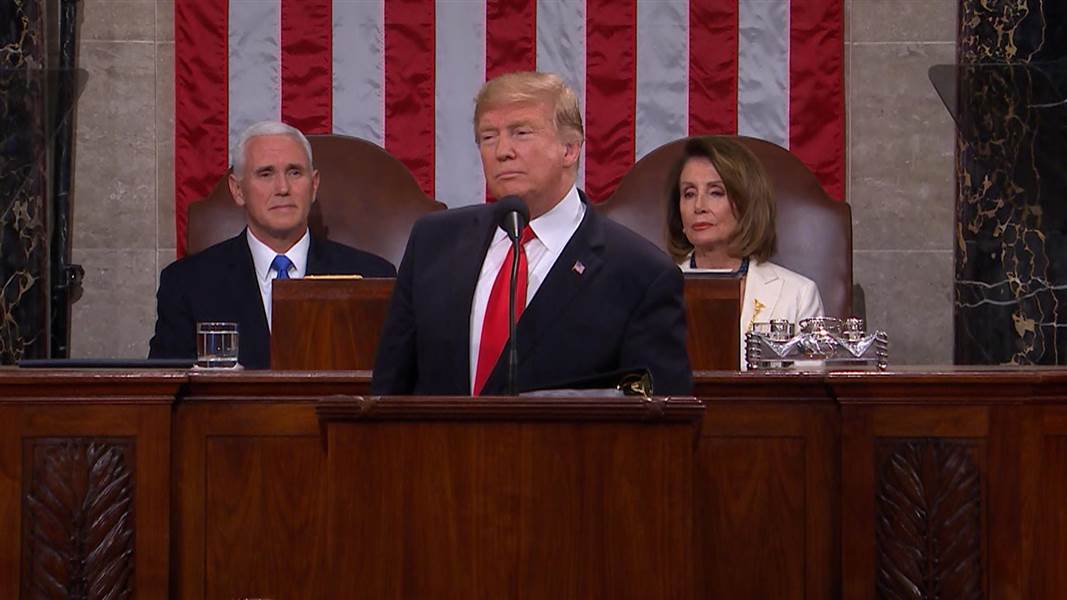 Donald Trump: We Must Reject Politics of Revenge; Embrace Potential for Cooperation

President Donald Trump addressed a joint session of Congress Tuesday for the 2019 State of the Union. The event was pushed back one week in response to the latest government shutdown -- which could happen again in 10 days.

The president reflected on the positive news in the economy, including better-than-expected job growth, low unemployment across the board, veterans bills, and the bipartisan criminal justice bill that passed in the 115th Congress.

Trump also reinforced the need for additional physical barriers along the US-Mexico border, alluding to a national security crisis as human traffickers, drug smugglers, and other criminals seek to get into the US. He called for a new, bipartisan infrastructure package that may provide him the easiest avenue to work with Democrats, as well as new policy for health care and prescription drug prices.

The ritual of the State of the Union has, in modern history, been defined by political grandstanding and self-indulgence. It often is also an exhibit of the toxic rancor that festers in the nation's capital. The president will take carefully crafted shots at the opposition party. The opposition party will not stand for even the most positive news touted by the president.

This is not lost on the American public, whether they watched the speech or not.

President Trump repeatedly talked about an agenda that was not a Republican agenda or a Democratic agenda but an American agenda and called on lawmakers to "reject the politics of revenge, resistance, and retribution, and embrace the boundless potential of cooperation, compromise and the common good.”

“We must choose between greatness or gridlock, results or resistance, vision or vengeance, incredible progress or pointless destruction. Tonight, I ask you to choose greatness," said President Trump.

But Trump is not the first president to use the State of the Union to call for civility and to work for the common good. President Obama left the Oval Office calling on lawmakers to do the same thing, yet the American people continue to be frustrated by words that are not followed up by action.

Even while calling for unity, Trump took shots at the other side for their partisan behavior rather than making a point to hold all sides -- including himself -- accountable. Americans want the two parties to work together. The polls show this overwhelmingly. They also want a leader who will carry the torch.

The question Americans are left with is: Are these words of unity just words again?

It is not too late for Trump to lead the charge, as someone who has been willing to step away from politics as usual. But the path to change must begin with those who speak of its need, because in US politics, the ones who preach change and the need to come together -- on both sides of the aisle -- are often the ones most guilty of divisive rhetoric and actions, because they are only talking to one side.