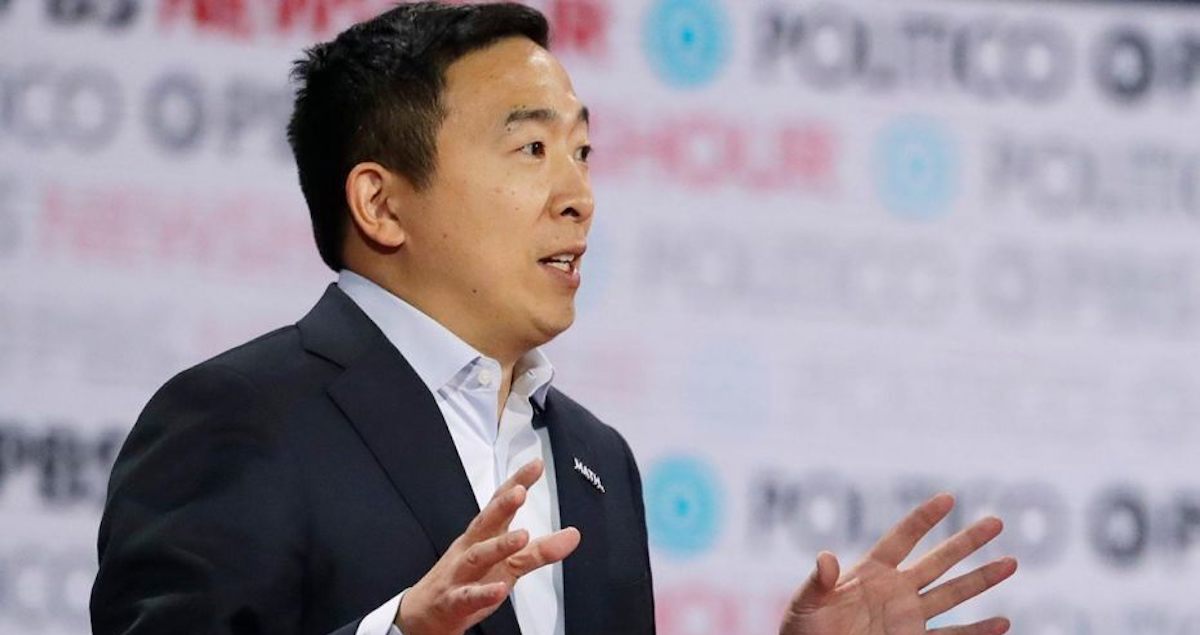 Can Andrew Yang's New Party Break Through The Two-Party Duopoly?

The Republican and Democratic parties have dominated politics for decades, with alternative parties occasionally sprouting up but rarely having a significant impact on elections. Political reformers will be closely watching the latest attempt to break that two-party system.

Andrew Yang, who unsuccessfully sought the Democratic nomination for president and then the party's nod in the New York mayoral campaign, is planning to launch his own political party next month, Politico first reported. The name and platform of Yang's third party will be announced in conjunction with the Oct. 5 release of his new book, "Forward: Notes on the Future of Our Democracy."

Yang's decision to leave the Democratic Party parallels a growing national trend of more Americans identifying as independents. However, reformers say it will take both a structural and cultural shift to undo America's two-party duopoly.

It's unclear where exactly Yang's party will fall on the political spectrum, but the focus of his book offers a glimpse into his new venture. "Yang introduces us to the various 'priests of the decline' of America, including politicians whose incentives have become divorced from the people they supposedly serve," per the book's publisher, Crown.

As a former businessperson, Yang was seen as a political outsider during his campaigns. One of the key tenets of his platform was a universal basic income program, through which the government would give citizens $1,000 every month. His most ardent supporters, dubbed the "Yang Gang," were highly active online and tended to be more apolitical.

With more Americans becoming disillusioned by politics and the two major parties, there is a market for alternatives, said John Opdycke of Open Primaries. But the challenge for Yang will be how to organize a political party that appeals to people who don't like political parties, he said.

"Part of what Andrew, I think, is recognizing is that because people are dissatisfied with the Democrats and Republicans, there's an organizing opportunity there. But maybe a party is not going to capture their enthusiasm," Opdycke said. "People don't like political parties because parties tend to be ideological. 'Here's what our set of policies are and if you don't agree with them, you're not welcome here.'"

According to Gallup's latest polling on political identity, conducted Aug. 2-17, 40 percent of Americans consider themselves independents. (Both the Democratic and Republican parties drew less than 30 percent of support.)

Even if there is a lot of enthusiasm for Yang's new party, the current political system will make it difficult for him or other independent candidates to succeed. Advocates for change believe structural reforms like ranked-choice voting, open primaries and multimember districts would make the system more viable for third parties.

But simply changing the system won't be enough, reformers say. The two-party duopoly is so ingrained in American politics that there needs to be a cultural shift as well.

Some people see third-party candidates as "spoilers" that draw votes away from the politician they prefer, resulting in the opposing party winning.

"That kind of zero-sum mentality between the two parties is part of what keeps people locked into those parties and will always block third-party or independent candidates," said Mike Ongstad of Stand Up Republic. "The reality is that the hunger is there. But there's almost a fear-based system that causes people to fall back on their typical and long-standing historical party."

The increased number of state laws limiting voter access is also contributing to this issue and reinforcing the political establishment, Ongstad said. The Renew America Movement, a center-right campaign launched by Stand Up Republic, recently sent letters to all 50 governors urging them to reject partisan attacks on the right to vote.

The burden of facing these barriers in the voting process might discourage people, especially those who don't identify with a major party or feel disenchanted with politics, from even participating in the first place, Ongstad said.

"But we're always stronger if we're including those voices, and the more voices that are included, the more likely we are to get some more diverse voices," he said.