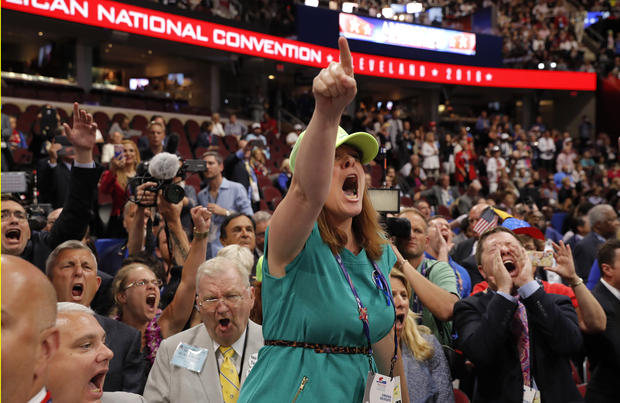 12 Ways Political Parties Are No Different Than Cults

Hello my fellow independent voters and friends, and thank you for reading another one of my articles that just might get you escorted off the premises for making an earnest attempt at some critical reflection and independent thought about a complicated subject!

And I don't intend it as a glib insult, but as a serious analytical description that might help us better understand what is going on in American politics and why political partisanship is such a compelling, powerful, deeply emotional, and very manipulative force.

Although I have been writing about the political and psychological blight of partisanship since 2009, the realization that the two parties are essentially cults occurred to me this week for the first time.

Academic sociologists began to take an interest in the study of cults in the 1930s, noting that some emerging religious movements, as well as racial and political movements, were able to exploit and abuse their members through systematic psychological manipulation techniques they all had in common regardless of differences in their stated aims and ideals.

A dismantling critique of political partisanship in America should carefully note the similarities between the two major political parties and exploitative cults.

Dr. Michael D. Langone is an American counseling psychologist who specializes in research about cultic groups, and the Executive Director of International Cultic Studies Association (ICSA), a tax-exempt research and educational organization concerned about psychological manipulation and cultic groups. He's been consulted by hundreds of former cult members and their families.

Langone helped develop a checklist of Characteristics Associated with Cultic Groups as an analytical tool for people to evaluate groups, programs, and relationships. See if any of the following items on the list can be checked for the Democratic and Republican Parties:

1. "The group displays excessively zealous and unquestioning commitment to its leader and regards his belief system, ideology, and practices as the Truth, as law."

How many partisans have we heard from who display an excessively zealous and unquestioning commitment to their party, and will never admit any flaw or wrongdoing from the president or presidential candidate of their party?

Researchers since the 1950s have found that when a person's convictions are challenged with facts, they are actually more likely to believe them even more fervently than they are to change their mind.

2. Questioning, doubt, and dissent are discouraged or even punished.

This might be why the two main parties are losing voters to non-affiliation, with more independent voters in America now than members of either of the two major parties.

Their questions, doubt, and dissent are not welcomed, listened to, carefully considered, or incorporated to refine and improve the parties. Instead, they're shouted down and pushed away.

3. Mind-altering practices (such as meditation, chanting, speaking in tongues, denunciation sessions, and debilitating work routines) are used in excess and serve to suppress doubts about the group and its leader(s).

The chanting, and slogans, and denunciations help condition party voters to march in lockstep together.

And denunciation of the other party and its leaders is a major and vital element of the two-party system in America, just like the "Two Minutes' Hate" in Nineteen Eighty-Four is an essential tool of control for the ruling party of Big Brother.

4. The group is elitist, claiming a special, exalted status for itself, its leader(s), and members (for example, the leader is considered the Messiah, a special being, an avatar, or the group and/or the leader is on a special mission to save humanity).

This is exactly what both of the two main parties do.

They cast themselves not merely as political alliances and educational / decision-making organizations for the purpose of facilitating the process of democratic government, but instead think of themselves in elitist, exalted terms as superior to their political enemies (Romney's "47%" comment, Clinton's "deplorable" comment). They even cast their presidential candidates and even candidates for lower offices as transformational, messianic figures on a special mission to save humanity.

Power swings back and forth between the parties because the public eventually sobers up, but by the time it does, a new messianic figure is introduced to keep the cultic dynamic in play and the establishment in power.

5. The group has a polarized us-versus-them mentality, which may cause conflict with the wider society.

I'm just going to leave that one without comment.

6. The leader is not accountable to any authorities.

The public increasingly feels that this is true with the two parties' presidents and major presidential candidates, especially after this most recent election, that they can engage in all kinds of behaviors that most consider reprehensible and unacceptable, that they can even cheat, that they can even break the law, and do so with impunity, and it's not good for our society.

7. The group teaches or implies that its supposedly exalted ends justify whatever means it deems necessary. This may result in members' participating in behaviors or activities they would have considered reprehensible or unethical before joining the group.

Just look at how zealous party members talk to each other online to see how dehumanizing the two party system is, how willing its fiercest loyalists are to degrade others to shout them down and bully them. They probably don't usually talk that way, for example, to their family members, their co-workers, their customers, or people they meet in public.

But the cultic two-party system switches off their humanity when they start to discuss politics and the shouting starts. Truth and humanity are the casualties of this pragmatic brutalism.

It bears noting here that the animating spirit of hard-polarized two-party politics in America today is a 1971 book titled, "Rules for Radicals," by a Machiavellian political activist named Saul Alinsky. It explicitly advocates achieving political ends by any means necessary.

Hillary Clinton wrote her senior thesis (titled "There Is Only the Fight... An Analysis of the Alinsky Model") about Alinsky and was personally offered a job by him, which she turned down for another opportunity. Barack Obama was mentored by community organizers in Chicago who were trained by Saul Alinksy.

8. The group is preoccupied with bringing in new members.

9. The group is preoccupied with making money.

10. Members are encouraged or required to live and/or socialize only with other group members.

Show of hands: Who's heard the term echo-chamber, and thought leaders and influencers discuss echo-chambers as a major factor in political polarization and a potentially a real threat to our society?

More characteristics of cultish organizations include:

11. No meaningful financial disclosure regarding budget or expenses, such as an independently audited financial statement.

12. Unreasonable fear about the outside world, such as impending catastrophe, evil conspiracies and persecutions.

This is the bread and butter of the two party system, right?

Both parties are guilty of inveterate alarmism.