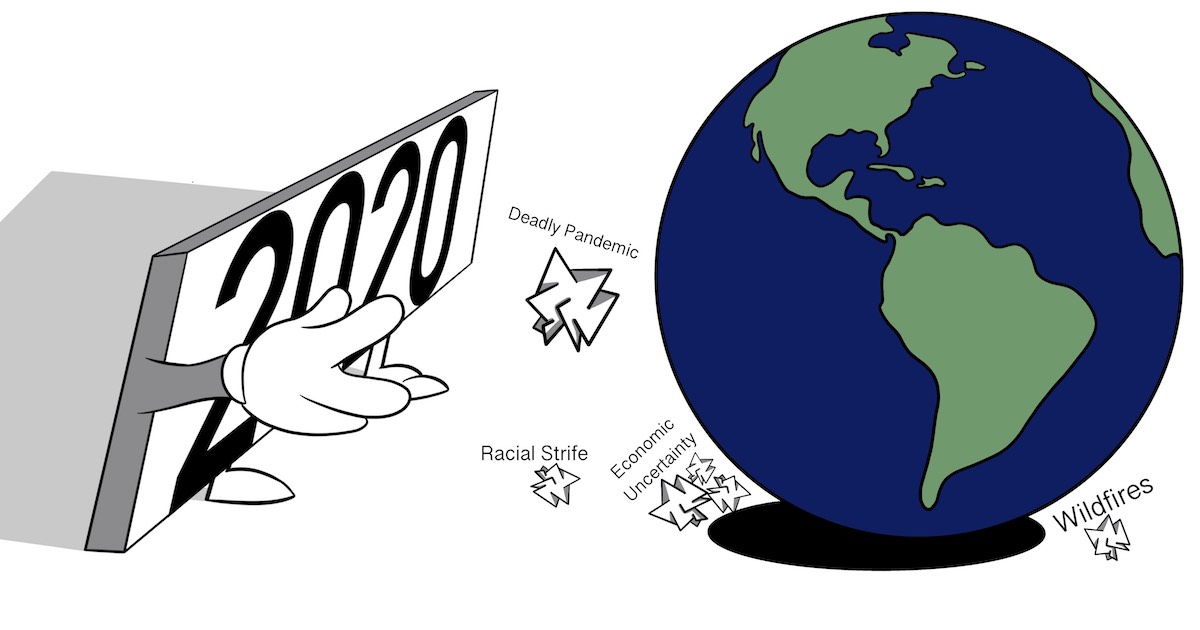 In a country suffering from pandemic-induced time distortion, try to remember that national elections are held on the first Tuesday in November. You can do it.

If 2020 stays true to script, this will be a head-spinning Election Night. This year has brought us hardship and headscratchers large and small. Wildfires. Racial strife. Economic uncertainty. Deadly pandemic. Quibi.

Though mathematically impossible, it would be so 2020 to find out the next President of the United States is…Kanye West.

No, a Kardashian will not be the next First Lady. (Can you believe that had to be said?). But it is possible we won’t know who’ll be picked to inhabit the White House come the end of the night on Nov. 3.

Polls show as many as half of registered voters will mail vote this year. That’ll take extra time to count, especially in swing states like Pennsylvania, Michigan and Wisconsin, where laws prohibit early processing of mail-in ballots.

Of course, if every expert predicts a delay in the final tally, that impish 2020 will see to it that Florida is delivered to Joe Biden, and the landslide will be callable before midnight.

Unless that happens—or, it’s imminently revealed that Earth is the unwitting subject of an intergalactic version of “The Truman Show” and this mad dramedy abruptly ends—we’re due for restless times.

Here, then, are 10 (tongue-in-cheek) tips to survive a never-ending Election Night:

Don’t let sitcoms cloud your opinion of mail carriers. Between now and Nov. 3, say hello in a warm-and-fuzzy way to USPS workers. They’re the essential souls leaping all barriers and helping handle the roughly 80-million-plus ballots Americans are sending in. Take it from Wayne Knight, the actor who played Newman, the mailman you love to hate, on “Seinfeld.” Knight recently released a YouTube video in character, claiming: “Everybody knows the only person who can slow down the mail…is a mailman!”

Election Day fills Facebook and Instagram feeds with photos featuring the iconic “I Voted” sticker. Folks affix them to their clothes, faces, sunglasses, even to pets. What do you do if you’re an early voter? Luckily, I Voted stickers come in the envelope with your mail-in ballot. Sticker selfies are already gumming up social media. But some of you may feel naked on Election Day without your sticker. Save it for that day, then. Or, pin on your used one if it’s lost its stickiness. No, not on your dog. And, think twice about the Post Malone facial tattoo solution.

In-person voting is mostly tabulated first. This may favor President Donald Trump. As more Democratic votes are counted on mail-in ballots, Biden’s numbers could rise later. This is being called the Red Mirage-Blue Shift. People will need to take deep breaths and chill. Both Republicans and Democrats ought to check medicine cabinets now for Xanax, Valium or their (physician recommended) anti-anxiety drug of choice.

Both the left- and right-leaning cable news outlets could likely be faced with killing plenty of air time if the results are foggy on Election Night. Democratic and Republican talking points will spew forth ad nauseum. However, if too many states are inconclusive, you don’t want to be tuning in when CNN’s Anderson Cooper starts playing the ukulele and plugging New Year’s Eve with Andy Cohen. Or, when Fox News’ Bret Baier begins tapdancing while naming all the state capitals in alphabetical order.

Most cities have an Election Central. In San Diego, it’s Golden Hall. This is where the fanatic partisans flock on Election Night to mingle with candidates, campaign staff and members of the local media. Political groupies can still get their fix at Election Central in 2020—but leave the Trump and Biden signs home. You don’t bring a broom to Game 1 of the World Series. There’s no need to hoist a Presidential posterboard this evening for a contest bound for extra innings. What are you going to chant for the TV cameras: “Four more…days?”

Seen “The Social Dilemma?” If so, you’ve discovered there’s never a bad time to disconnect from addictive social media platforms. Especially Twitter. It’s President Trump’s sandbox, as well as a cesspool where trolls of all political stripes blaze rapid-fire lethal barbs at each other. Election Night on Twitter will be a war zone. Don’t risk venturing into the path of incoming hostile Tweetstorms. Troubling to say, you’d actually be better off subscribing to Quibi.

up time to the announcement of our next President: Do online Christmas shopping. Start a

Black Tuesday. It’d be premature to buy, say, a brand-new MAGA hat. Or, a Shepard Fairey

“Ridin’ with Biden” t-shirt. But have you seen the new line of Homesick Scented Candles?

They’re calming, and scented to smell like your hometown. For example: The Southern Cal

When you’re searching for alternative stimuli to get through the election morass, here’s one to skip: kidnapping your state governor. Yes, some militia types recently met behind a secret door in a basement and devised an ill-fated plan to capture Michigan Gov. Gretchen Whitmer. Those knuckleheads are behind bars now. It’ll be quite a while before they whiff the tart cherries and rich chocolate scents of Michigan, courtesy of a Homesick Scented Candle.

OK, geez, now it’s Thanksgiving and we still haven’t named a Commander-in-Chief? In an insane scenario in which the election count drags into Nov. 26 (Thanksgiving is still the last Thursday of the month…right?) you’ll need suggestions for non-political dinner conversation. Topics that won’t provoke a food fight. To make it past the turkey and into the pumpkin pie, here are three relatively safe topics: 1. Your favorite Quick Pick Lottery numbers. 2. The best pizza toppings. 3. The Netflix documentary “Dolly Parton: Here I Am.” She’s an American treasure.

Is it over yet? If you’re a tech savant, please hit the lab and create an un-hackable app

that enables Americans to vote definitively, anonymously and electronically. In Estonia,

they vote in national elections on their phones! We live in the age of PayPal and Venmo.

You can Zelle your babysitter and split a ride in an Uber. Yet, to vote for the President of the

United States you have to stay inside the circle with your pen and fill out a piece of paper.

Somebody, please, send me a scented candle.