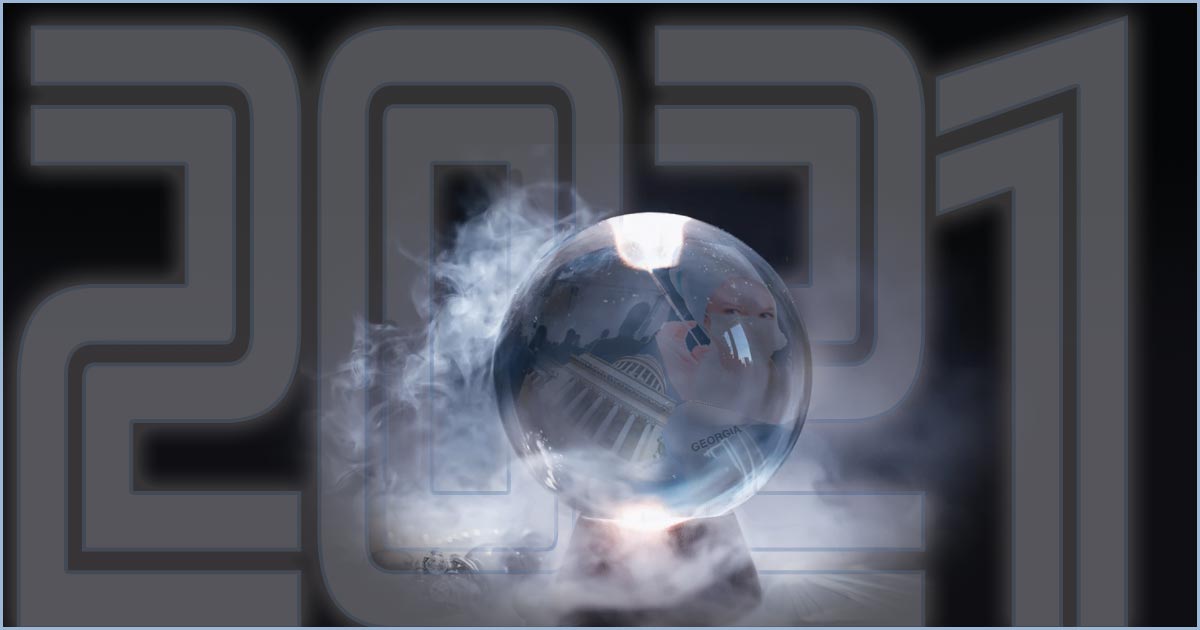 With COVID-19 vaccines going into the pipeline, it’s reasonable to be optimistic about our collective health scenario for 2021. Unfortunately, Pfizer doesn’t seem to have an antidote for the ills that plague the body politic.

Pardon my pessimism, but partisanship feels pricklier than ever. The presidency notwithstanding, the preeminent political players have primarily preserved power.

With that depressive thought in mind, here are 10 reasonably bipartisan political predictions that don’t bode well for our democracy. Whether they make you laugh, cry or curse aloud, here’s to a new year where we all take representative government more seriously.

Georgia On Our Minds

Due to state law, both of Georgia’s U.S. Senate races will be decided by a runoff election on Jan. 5. Republican Sen. David Perdue faces Democrat Jon Ossoff and Republican Sen. Kelly Loeffler is dueling with Democrat Rev. Raphael Warnock. These results will likely determine the balance of power in the Senate.

We’ll be seeing a lot of Loeffler and Warnock. Georgia Sen. Johnny Isakson retired in late 2019 for health reasons. Loeffler is a gubernatorial appointee to the seat. Let’s say Loeffler, or Warnock, wins the runoff in a tight race. Then comes the runoff recount and an ensuing brouhaha. Upon resolution, it won’t be long before both are back on the campaign trail. The seat has a term that expires in 2022.

President-elect Joe Biden has a habit of letting his personal stories run on a little too long. We didn’t need to know he’d just stepped out of the shower when he started to play with his dog Major which led to him slipping on a rug and fracturing a bone in his foot.

White House aides will stand at the back of the press briefing room and signal him to curtail his home-spun tales. A good approach would be to hold up a sign with a photo of Vice President-elect Kamala Harris holding a finger up to her lips. Alternatively, they might use a photo of actress and comedian Maya Rudolph holding a movie clapper with the word “Cut!” on it.‍

Coronavirus is a deadly disease that has killed hundreds of thousands of Americans and more than 1.5 million people all over the world.

People will stop calling the cause of the pandemic The ’Rona. When Donald Trump Jr. caught COVID-19 and made an Instagram video where he smilingly announced, “Apparently, I got The ’Rona.” According to late-night comedian Steven Colbert, “The Rona is something diagnosed by a Bro Doc.” Let’s take the name seriously. Would you want an ER physician singing you the Billy Joel lyric, “Working too hard gave you a heart attack-ack-ack-ack-ack?”

Dr. Deborah Birx was the fashionable figurehead for the current administration as its coronavirus response coordinator. She wants to continue in the next administration in some capacity, but her reputation may have become bleach-stained.

As a backup side hustle, Dr. Birx will agree to do a one-night stint on the QVC shopping channel selling her trademark colorful scarves. If the Biden administration snubs her? Look for a merch collab with Beyoncé on a signature line of turquoise Hermès knockoffs, selling exclusively in K-Mart.

After being named Sexiest Man Alive by both “People” and AARP,” Dr Fauci will be signed to a three-picture deal as the next James Bond. How does he like his onscreen cocktails? Frozen, then injected.

Senate Majority Leader Mitch McConnell and House Speaker Nancy Pelosi seem to be in an unending loop of scripted inaction in Washington.

It will be revealed that Mitch and Nancy were replaced by “Westworld”-style android hosts back in 2010. Both have been programmed by special-interest groups to let high-paying lobbyists have their way with the federal government. When the country hears about it, they’ll be up in arms for an entire news cycle, then forget all about it.

“Borat Subsequent Moviefilm” proved once again that Sasha Baron Cohen is a master of disguise and a pro at punkin’ the political world. Where’s he been lately, though?

For “Moviefilm III,” he’s plotting to impersonate U.S. Rep-elect Sara Jacobs (D, CA-53). Why Jacobs? She’s new and not yet highly recognizable. Jacobs will be focused on climate change, social injustice and trying to be initiated into The Squad. Meanwhile, impersonator Sasha Baron Jacobs will wreak havoc in the halls of Congress, promoting polygamy, misogyny and pro-Kazakhstan legislation.

It’ll Be Called ‘The Coif’

The Netflix historical drama “The Crown,” is out of source material and producers need subject matter for a new series. Though highly acclaimed, critics have said the retelling of Queen Elizabeth’s long reign in the British monarchy was highly dramatized and often skewered actual history.

The production team will focus on drama queen Trump for its next project. For a Trump Administration miniseries, historical accuracy demands obfuscation of historical accuracy. Recall: The Access Hollywood tape. The biggest-inauguration-crowd-ever claim. The revolving door at the White House. Kids in cages. A refusal to admit election defeat. You don’t need to make that stuff up. Alex Baldwin to star.

Rudy Giuliani has some free time now that his Quixotic national quest to invalidate the Presidential election has reached a dead end.

In early January, America’s Mayor will host a limited-series podcast called “Pardon Me!” The first episode will go toward explaining the Constitutionality of a pre-emptive Presidential pardon. Guests will include Donald Jr., Eric and Ivanka Trump. Jared Kushner’s podcast appearance will be preempted when the sound of his voice makes dogs all over the country howl in pain.

Let’s Vote On It

An enormous amount of time and energy went into complaints about the legitimacy and accuracy of the 2020 election process.

We’ll spend a couple years forgetting and/or ignoring the country needs clarity on mail-in voting and ballot tabulation and the Electoral College. There’ll be a minimum of concern that arises before the 2022 midterm elections. By October 2024, news pundits will once again be talking about rigged election plots by billionaire George Soros and deceased Venezuelan president Hugo Chavez.