New Mexico entrepreneur and horse trainer Jarratt Applewhite could make history in the Land of Enchantment. He is running for State House District 50 as an independent, and if he wins he would be the first person elected to the State Legislature with no party affiliation ever and the first non-Democrat/Republican since 1914.

Applewhite launched his campaign this week, stating that he is running on two things in particular:

Partisan control of redistricting, discriminatory ballot access laws, closed primaries... all of these are issues that Applewhite wants to fix. Voters are fed up with the current system, but are denied alternative choices because of the system in place, so they don't participate -- especially younger voters.

"What is underneath all of this is that power corrupts, and the political parties have power and have corrupted the democracy they control," said Applewhite, in an interview for IVN.

Applewhite resigned from the board of Good Government New Mexico, explaining that he is more of an activist and there should be some separation between nonprofit good government organizations and lawmakers/political candidates "in order to avoid any appearance of collusion or impropriety."

Bringing Back the Estancia Valley

One of the biggest issues that convinced Applewhite to run was how his House district was "shamefully redrawn after the last census to make it a safe Democratic seat."

Applewhite says the House district had been the center of the state's farm and ranch district encompassing the Estancia Valley. However, state lawmakers divided the community, took out some of its major cities, including the city of Estancia itself, to include Santa Fe suburban areas and stretched it to include parts of multiple counties. 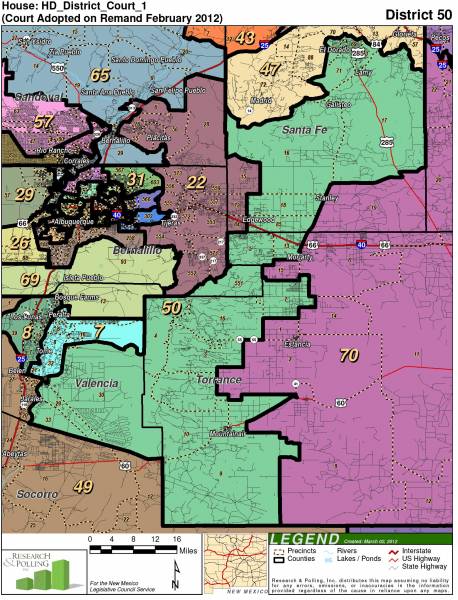 "I have to travel 120 miles down the interstate to campaign in parts of my district," Applewhite explains.

The irony, Applewhite says, is that if he is successful in fixing the boundary lines of District 50, he will draw himself out of his district -- something he is ok with.

"I am not looking for a political career. I am looking to make a difference," he said during his interview.

Redistricting reform is just one of the three major pillars to election reform that Applewhite is running on. He also wants to enact open primaries.

"In our current sorry state of affairs, the primary election is the only opportunity for voters to weigh in, as the winner of the primary is often unopposed in the general election," he says. "Party primaries are increasingly dominated by insiders with extreme views. Moderate voices within our parties have almost no influence."

The third pillar of Applewhite's campaign is ballot access reform.

Again, there has not been a state representative outside the major party apparatus in 103 years. What's more, current ballot access requirements discourage independents from running.

"In the 40 years since the courts forced New Mexico to allow independent candidates to run, only 16 candidates have been able to get on the ballot — through 2014 there had been 1,638 races!" Applewhite says on his website.

Applewhite says he and his supporters "are punished for not being partisan," and he will "work hard to even the playing field for all voters and for all candidates."

New Mexico Open Primaries commented that Applewhite is the first of several candidates the group will endorse over the next few months, citing the need for more candidates like him.

"When voters see mainstream independent candidates representing ideas and values reflective of 80 percent of the voters, they will quickly look beyond the two major parties for leaders who can solve problems. For too long the two major parties have been focused on winning the next election rather than building broad-based coalitions that can solve our wicked-complex problems. New Mexico needs candidates of good will committed to representing the voter, not the party and Jarratt certainly fits that description." - Bob Perls

In terms of fundraising, Jarratt Applewhite is applying the Bernie Sanders model to his campaign. He refuses to accept money from PACs, businesses, lobbyists, and will only accept individual contributions up to $200.

All of this is specified on his website, along with a promise that his campaign will not distribute personal information. He wants voters to know that if they donate to his campaign, they will not get solicitations from a candidate three states over, like what happens with major-party candidates.

Applewhite knows he faces an uphill battle. However, he is optimistic that if he is elected, he can help drive real change that will improve representation and elections in New Mexico.

Shawn is the Election Reform Editor for IVN.us. He studied history and philosophy at the University of North Texas, and joined the IVN team in 2012. He has several years of experience covering the broad scope of political and election reform efforts across the country, and has an extensive knowledge of the movement at large. A native Texan, he now lives in San Diego, California.