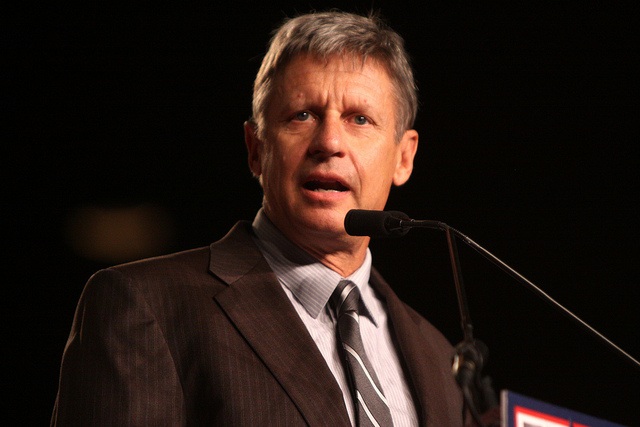 There is no shortage of love lost between CNN and the libertarian presidential candidate, former two term New Mexico Gov. Gary Johnson, nor is it a secret. The cable news network continues to remain a thorn in his side (for about a year now), carefully and quietly excluding Johnson from its polling. One small ray of hope emerged on August 29, 2011 when CNN finally included him in their bi-weekly national poll. Apparently Gov. Johnson polled a bit too high at 2%, and his name was never to be seen on all subsequent polls during his remaining tenure in the Republican primary.

With the arrival of a New Year, Gov. Johnson felt liberated, recharged, and right at home in his new venue– the Libertarian Party. Dominating state conventions and handily securing the party’s nomination on the first ballot at the national convention in Las Vegas, the newly minted presidential nominee of the nation’s third largest political party was certain to receive some much anticipated attention from CNN and the rest of the establishment press. Then Gov. Johnson realized there’s a very good reason why these media outlets are considered establishmentarian– they toe the disingenuous two-party line and narrative.

When Gary Johnson supporters organized a Blackout CNN protest, call in, and Twitter Bomb for July 15-16, this reporter felt obliged to head down to Atlanta. Johnson’s campaign adviser and southern regional director Chris Hill was kind enough to let me hunker down in the Live Free Express while he circled the CNN building blaring the audio version of Gov. Johnson’s Be Libertarian With Me YouTube video from a bullhorn fastened to the hood of the bus.

Sunday turned out to be a dry run of sorts, but the real action took place Monday morning. About 100 activists took position outside and around CNN headquarters to make their message clear: Include Gary! They even donned white t-shirts that read “INCLUDE GARY ON CNN” and wandered through the CNN lobbies as roving protest billboards.

The makeshift PA system didn’t fail to impress and garnered plenty of attention, with random people in cars and on the streets cheering, honking, and triumphantly raising their fists in the air. Local police officers even gave the occasional thumbs up as we cruised by. It seems that everyone within an eight-block radius took notice except for CNN. Hill noted their absence:

“We just assumed that CNN would do their job and walk out the front door with a camera, but they didn’t. Candy Crowley, on the air months ago, said that CNN would be giving Gary fair and equal coverage, and there’s been nothing.It would be one thing if we had a random third party candidate, but we don’t. We’ve got a guy on the ballot in all 50 states with an impeccable gubernatorial record and more executive experience than Obama and Romney combined. He can take this election. 80% of Americans are ready to consider voting third party, but if the media has no integrity and won’t allow Americans to even get to know their third choice, then we’re all being robbed.It’s not that we need the media to do something for Gov. Johnson, we just need them to do their job and show a little journalistic integrity instead of being completely biased. It is completely unacceptable, and none of us are going to stop until Gary gets the equal, fair coverage that he’s earned.”

CNN is at least good for one thing, according to Johnson supporters – keeping them fired up and determined to win over the curious onlookers and random passersby. One such protester shared his perspective of the event:

“A lot of people stopped to talk with me, asking about Gary and who he is. As soon as they hear he’s going to be on the ballot in all fifty states and that he’s likely to be on the debate stage, they get really excited because almost everybody that I’ve run into so far is hungry for a third choice.”

An independent voter taking notice of the event underscored the point that most of his peers do consider this election to be about “Obamney” –essentially a false choice between two candidates masquerading as the antithesis of one another. “Giving us these two false choices isn’t really a choice,” remarked another onlooker. “I still don’t know too much about Gary Johnson, but if he wants to end the wars and balance the budget then I’m definitely going to look him up when I get home.”

Hill is encouraged by all of the engagement and interaction:

“Tons of people stopped to talk to protesters with little to no opposition. At first they’d never heard of Gov. Johnson. So they explain who he is and that he will be on the ballot in all fifty states. Their immediate response is, ‘I’ve got to look into this! How is he not on the news? What’s the reason?’ That’s when they say ‘that’s exactly why we’re here, to try and change that.’Almost everybody wanted t-shirts, bumper stickers, and yard signs. So we gave out tons of stuff, and they’re brand new Gary Johnson supporters now! One person I spoke to didn’t know which candidate he was voting for. He voted Obama in ’08, but he’s tired of him. He’s even thinking about voting for Romney, but now he knows there’s a third choice in Gary Johnson. He said to me, ‘If Gary Johnson’s record is what you say it is, I want to vote for that guy!’ You can’t ask for a better outcome than that!”

Additional protests occurred in cities like Dallas, and according to Chris Hill it was larger than Atlanta’s. Most of the others were smaller protests at affiliates all over the country, and not just protesting CNN, but CBS, ABC, and NBC. Hill maintains that the protest is not over. He is encouraging supporters of Gov. Johnson from across the country to write emails, letters, and op eds to their respective local newspapers and media outlets, as well as the Commission on Presidential Debates and polling organizations.

“If the polls include him, the people will choose him. And if the people choose him, he’ll get into the debates. And if he gets into the debates, he’ll crush Obama and Romney with nothing more than reason, common sense, and his track record. Then he’ll be in the White House.People need to know Gov. Johnson ran as a Republican in a state that favors Democrats by a 2-1 margin and won against an incumbent. He governed as a libertarian and probably vetoed more spending bills than any other governor in the history of the republic, and got reelected! I mean he crushed it on reelection.That just shows what Americans are willing to do when they have the right candidate. Just looking at what he did in New Mexico as an example, people are willing to cross party lines without any problem or hesitation and vote for the person they believe in– whether it’s a Republican, Democrat, or Libertarian.We had some Ron Paul people show up today with signs, and its great seeing them come out to these events. They’re tremendous activists and advocates for the cause of liberty. We have Democrats, Republicans, Tea Partiers, and libertarians all protesting CNN for Gov. Johnson. This is a grass roots effort on everyone’s part. It wasn’t organized by the campaign. I’m just here to support them with all the resources I have.”

Strategically, Johnson’s campaign doesn’t require a massive amount of advertising. President Obama and Gov. Romney are doing a great job of saving Johnson's campaign time and money by pointing out each other's shortcoming on their own. Rather, the focus is on meeting the 15% debate threshold by the end of September, and that’s going to require some cooperating with polling and media organizations. Chris Hill doesn’t want special treatment for Gov. Gary Johnson, but he's simply asking “journalists that claim to be journalists to be journalists.”

Unfortunately, its a pretty lofty goal.

Craig is an artist and analyst in Nashville, TN not affiliated with any political party.