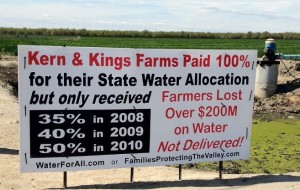 One of the most contentious areas in the California water wars is the San Joaquin Valley, which is in the middle of the state.  It is home to massive agricultural operations and produces fruit, vegetables, grains, cotton, and even crops like Sorghum Sudan grass for biofuel. The San Joaquin Valley (also known as the Central Valley) doesn't just feed California. It feeds the nation too and is an important source of revenue and jobs for California. Agriculture, of course, uses prodigious amounts of water. California doesn't have enough water to go around. That’s why the water wars are so contentious in the Central Valley.

This is the first in a series of articles focusing on water issues in various parts of California, the politics involved, who the players are, and who opposes them. And there will always be someone in opposition to whatever a water plan might be. The water wars are bedrock to California politics.

The photo here was taken near Bakersfield. It clearly states the view of Central Valley agriculture. They say they pay for water they don’t receive. Allocations have been severely cut. Other signs in the area say the valley is experiencing a man made drought. Hundreds of thousands of acres have been fallowed. Unemployment is some areas in 40%. All of this is done, they say, to protect the delta smelt, a three inch fish that lives in the Sacramento Delta. This may be a bit of hyperbole. Their real point is that too much water goes into the Sacramento Delta and then to the ocean and too little comes to them.

San Joaquin Valley farmers do indeed receive just a fraction of their allocation. In fact, it’s getting worse for them. The federal Bureau of Reclamation just announced that farmers in the valley will receive a paltry 30% of their allocated amount in 2012.

HR 1837 has passed a House committee. If it becomes law, it would allocate substantially more water to the Central Valley and is sponsored by Devin Nunes from the 21st District there.  It faces an uncertain future and President Obama has said he may veto it. It does however demonstrate the magnitude of water problems in the Central Valley.

How can agriculture make plans and decide what to grow if it has no clear idea how much water it will receive and the amount fluctuates from year to year?