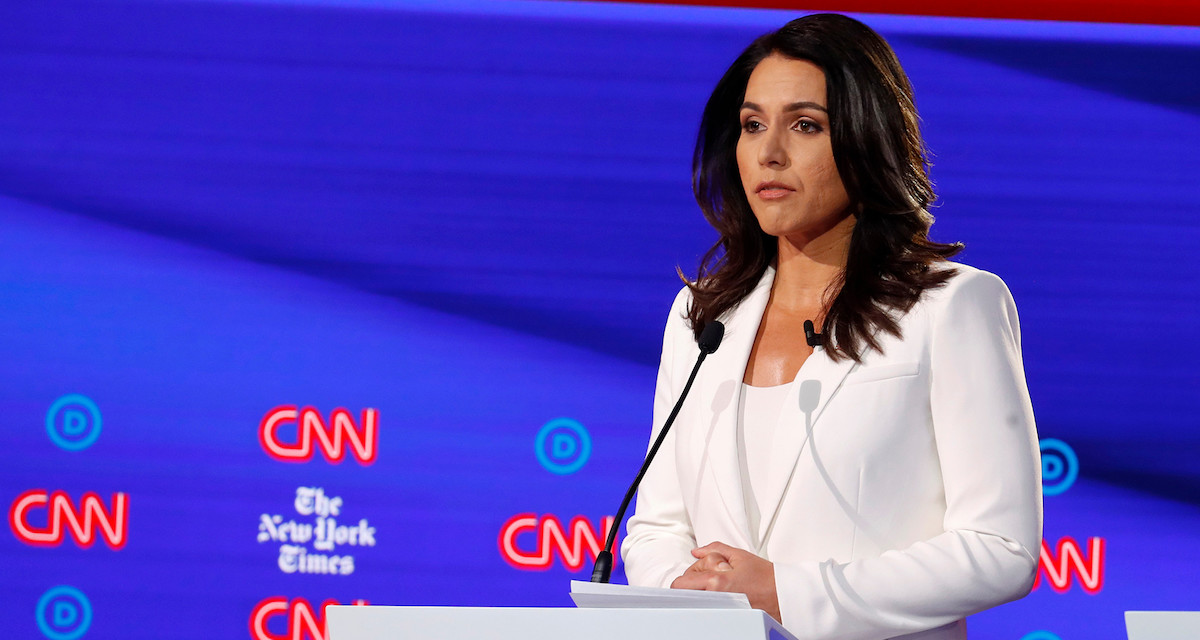 “If the Democratic presidential primary or caucus in your state were held today, who would you vote for?”

That’s a remarkable showing among independent voters for a US House rep with far less national name recognition than the former vice president.

Gabbard also crushes Sen. Cory Booker, who received one percent among both independent voters and the entire sample for the straw poll.

But Warren Is Independents’ Current Favorite

Overall, Joe Biden would win the primary if it were hypothetically held tomorrow, with 30 percent of all poll respondents saying they would vote for him.

He’s followed by Sens. Elizabeth Warren and Bernie Sanders in distant second and third places with 22 and 12 percent, respectively. Elizabeth Warren is polling strong among independent voters as her star steadily rises within the primary from her single digit lows this spring.

At 19 percent according to this survey, Warren appears to be the favorite of independents at the moment. That seems to confirm FiveThirtyEight’s theory last month that Warren is broadening her appeal to moderates.

Tulsi Gabbard’s support shrinks from within range of Joe Biden to a paltry one percent among registered Democrats in the poll, as compared to Biden’s 34% which puts him ahead of Warren both among Democrats and overall.

The Democratic Party establishment has had the knives out for Tulsi ever since she announced her insurgent, antiwar presidential campaign.

The independent-minded Gabbard has not hesitated to criticize her own party when it’s at odds with what she views as its animating principles.

In a hyper-polarized party duopoly characterized by echo chambers and groupthink, criticizing party leaders is viewed as disloyalty to the tribe, rather than reckoned with as a dynamic process of storming and norming to strengthen it.

In their coverage and analysis, a gaggle of Democratic news commentators in the mainstream media have taken extraordinary steps to smear and discredit Gabbard, the first female U.S. combat veteran to run for president (she served in a medical unit in the second Iraq War).

The two most common lines of attack are that Tulsi Gabbard is pro-Assad, the dictator of Syria, and that she is a stooge of the Russian government (along the same lines as the never burnt-out conspiracy theory fanned by cable news anchors that Donald Trump is a puppet of the Kremlin).

It was an odd move for a seasoned political campaigner like Clinton. It’s a basic tenet of electioneering to ignore your opponent when they’re low in the polls, and only to attack them with negative campaigning if they pose a viable threat.

But the lack of restraint in this case reveals the depth of the Democratic Party establishment’s loathing for the congresswoman from Hawaii.

That’s probably why Tulsi Gabbard polls so well among independent voters. They like seeing a candidate that gets that deep under the skin of establishment plutocrats.