Up Next
...
A Bunch of Good Stuff Coming Out of COVID-19 Crises
Read More 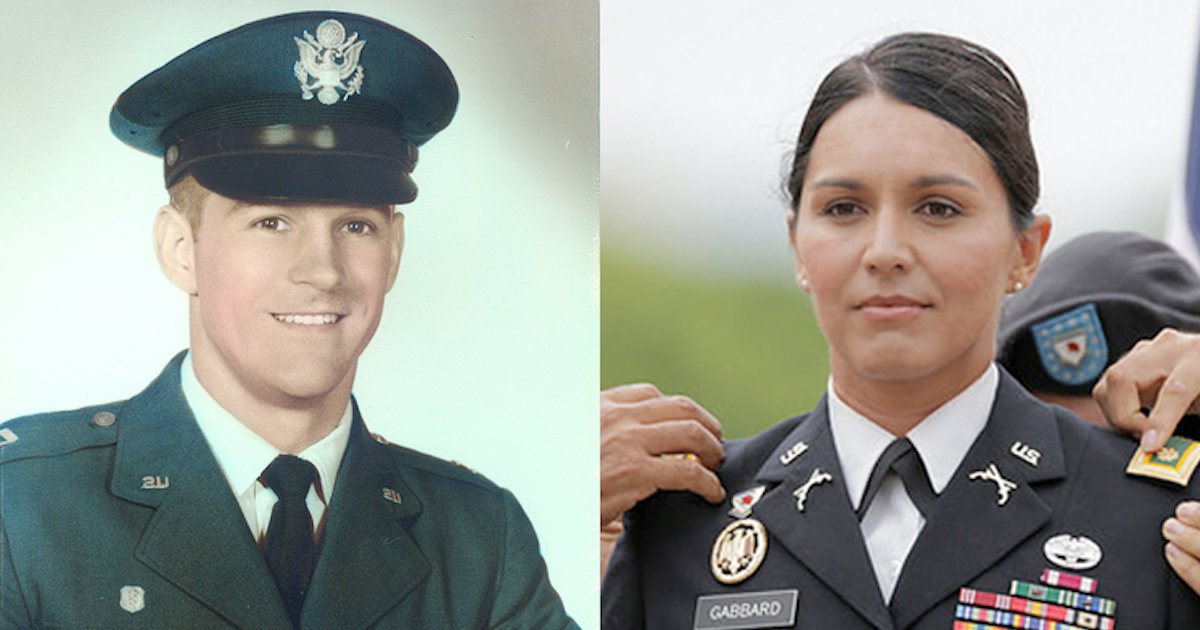 Rep. Tulsi Gabbard (D) of Hawaii is a progressive socialist.

And former Rep. Ron Paul (R) is a constitutional conservative.[1]

Since you can make a strong case that Tulsi Gabbard is a radical progressive who represents the far left wing of the Democratic Party, and that Ron Paul is a hardcore right winger who represents ultra conservatives in the Republican Party...

It's astonishing how much socialist progressive Tulsi Gabbard's politics align with that of libertarian conservative Ron Paul's...

"It really doesn't matter whether I'm right or wrong: the war is going to end because we're gonna have such a political and financial havoc here with the devaluation of our dollar, because we just can't keep affording it. This is usually how empires end, by spending too much money maintaining their empire." -Ron Paul

"My commitment in fighting to end these counterproductive regime change wars is based on these experiences and my understanding [of] the cost of war and who pays the price." -Tulsi Gabbard

Until you realize their politics align on all the many great issues that put them at total odds with their own parties.

So it's strange how they could be seen as hyper polarized, far right and far left politicians, when they are hardly party stalwarts and are in fact notoriously fierce independents with a reputation for being their respective parties' voice of conscience in the U.S. House.[2]

What this political alignment also reveals is that the establishment parties, whose leaders talk about the other party as if they are fighting an existential battle between absolute good and evil itself, are in fact closely aligned on these most important issues with such wide reaching consequences of world historical import.

It seems that other than continuing to run up the national debt to obscene levels, the two major parties in Washington may be most closely aligned when it comes to decades of U.S. entrenchment in foreign armed conflicts. As far as that goes the administrations of Democrat Barack Obama and Republican George W. Bush were nearly indistinguishable.

Most interestingly these two candidates campaigned as antiwar candidates in their party primaries and the general election, and that's how both candidates won with an electorate weary of war, but both reversed their campaign platform 180 degrees after winning and becoming president.

"I'm a hardcore libertarian and I love Tulsi Gabbard"

"Though I am no fan of government in general and probably don't align with many people in this sub politically, Tulsi is a woman of integrity and strong anti-war sentiment.

As a libertarian who believes in non-aggression, I consider war to be, by far, the worst thing that the state does. After listening to her on Joe Rogan's show a week or so ago, it seems like she was hinting at a potential presidential run.....and I hope she decides to do it.

I legitimately think she is the only chance the Dems have to beat Trump (barring the economy crashing before the election). I obviously don't agree with all of Tulsi's positions on government, but she is one of the few congresspeople that keeps it real.

She is honest and her tenacity against all of the government's stupid, evil wars is a breath of fresh air. I didn't vote in the last election, and I am personally more 'conservative' in my own lifestyle, but I would strongly consider casting a vote for Tulsi."

This is so much like the kind of notes anti-war progressives would post online about Congressman Ron Paul back in 2007 when the stirrings of his first revolutionary conservative antiwar bid for the Republican Party's presidential nomination began.

Here is the nexus of convergence between the political platforms of Ron Paul and Tulsi Gabbard:

The U.S. actively foments and instigates, aggravates and joins, and even suddenly switches sides in these conflicts (as in Iraq, Iran, Pakistan, and Afghanistan in the 80s, Iraq in '03, and Libya in '11).

And yes believe it or not the U.S. has actually been fighting on the same side as Al Qaeda in Yemen, and the U.S.-Saudi coalition has cut deals with Al-Qaeda there.

"Will you stand for the humanity of the Yemeni people? Will you stand against Saudi Arabia’s genocidal war? Or will you continue to support this war that has caused 22 million Yemeni people to be in desperate need of humanitarian aid? To cause these 85,000 children to have died from starvation, to have caused the dropping of U.S.-made bombs on innocent civilians, killing tens of thousands of people." - Tulsi Gabbard

When all of the contradictions in the reasons for perpetual American involvement in never ending civil wars in Africa and the Middle East stack up (like getting Americans killed fighting against a foreign totalitarian dictator that the U.S. had just armed, funded, supported, or fought alongside as allies only years before: e.g. Gaddafi, Hussein, the Taliban, and even the Soviet Union) many voters begin to realize the "reasons" are really rationalizations that play on our fears and insecurities to support an official policy of destabilizing the world with violence for massive corporate profits and political glory.

"We're in 130 countries, we have 700 bases around the world, and it's going to come to an end. I want it to come to an end more gracefully and peacefully, follow the constitution, and follow a more sensible foreign policy." -Ron Paul

"I served in a war in Iraq, a war that was launched based on lies and a war that was launched without evidence. And so the American people were duped... As a soldier, as an American, as a member of Congress, it is my duty and my responsibility to exercise skepticism any time anyone tries to send our service members into harm’s way or use our military to go in and start a new war." -Tulsi Gabbard

That's something else they have in common that makes their efforts to reform U.S. foreign and military policy along constitutional and humanitarian lines so remarkable. They speak with credibility and authority to these issues. They actually both served in medical units in the military coincidentally enough. They're healers and warriors. That's an important combination in a political leader, someone who's a true humanitarian, but also tough as nails and courageous.

Ron Paul's service and foreign policy platform earned him more money in political campaign donations from active duty military members in 2008 than any other candidate in any party in that crowded election field.

His top three contributors in fact, were the U.S. Army, the U.S. Navy, and The U.S. Air Force. We'll see if something similar happens with Tulsi Gabbard after her first couple debates on television.

If the mainstream media treatment of Tulsi Gabbard 2020 so far hasn't already made it obvious, onlookers and activists should fully anticipate a mirror image of the establishment's response to Ron Paul with Tulsi Gabbard in 2016 as well. The media played all kinds of dirty tricks on Ron Paul back then, and they are already gearing up to do the same to Tulsi Gabbard now.

There isn't space for an exhaustive list, but there were all kinds of shenanigans at the 2012 GOP convention, and in 2008 the media blacked out coverage of Ron Paul in proportion to his popularity online, the intense energy of his volunteers, and the number of young people, Democrats, and independent voters he brought into the Republican Party, at least long enough to vote for him.

But here's something a lot of people don't know about Rep. Tulsi Gabbard. We know she volunteered to fight in a medical unit in a combat zone in Iraq. What a lot of people don't know is she did that as a sitting state rep in Hawaii. After she had already become a successful state politician at a very young age, she walked away from power and safety to serve in a war zone.

That speaks volumes about her character.

[1]Like President Thomas Jefferson Ron Paul is a constitutional conservative, but also an anarchist at heart, who believes that people should be allowed to opt out of paying taxes and receiving government services without being treated like criminals for it.

[2] Further study and elaboration of these problems (that arise when we talk about politics in terms of a dichotomizing uni-dimensional spectrum with which we seem to meaningfully assess the relative "leftness" and "rightness" of political figures and ideologies) could yield a dismantling critique of the entire left / right paradigm.