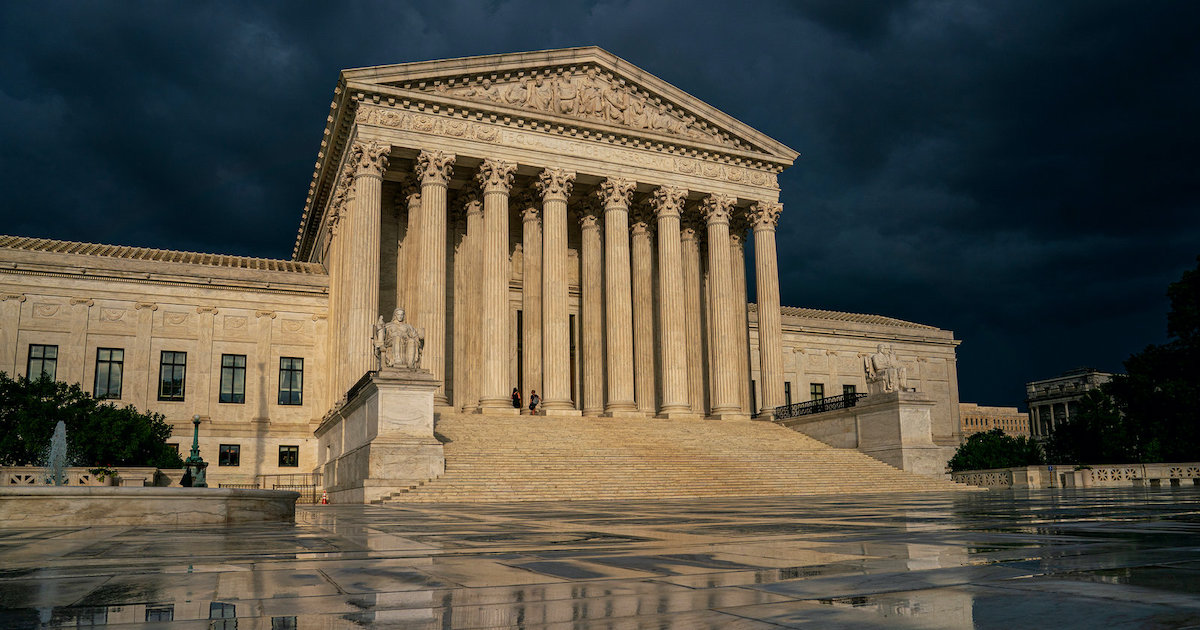 The Court and Public Opinion

The current term of the Supreme Court promises to be one of the most pivotal in decades. Although abortion has received most of the attention, with both the new Texas bounty law and a direct attack on Roe v. Wade by Mississippi on the docket, the justices will rule on many other inflammatory issues, including challenges to voting laws passed in Republican-controlled states that may well determine the future of American democracy.

After two centuries in which both the right to vote and ability to vote have been expanded, conservatives are determined to shrink both and thus solidify minority rule in the United States.

A solid conservative majority on the Supreme Court would seem to foretell a string of victories for conservative challengers — abortion will be declared a states’ rights issue, as will restrictive voting laws, while gun control legislation and religious exemptions to, say, vaccine mandates, will be deemed in violation of the Constitution.

But this is not an ordinary environment. Conservative justices have been under so much political pressure that three of the six, Samuel Alito, Clarence Thomas, and Amy Coney Barrett, have taken the unusual step of publicly refuting the notion that they are merely “politicians in robes,” or “political hacks.”  These denials not only failed to quiet the criticism, but instead merely intensified the assertions that the justices were precisely what they denied they were.

Umbrage notwithstanding, it is far from clear how the justices will respond to their plummeting popularity. Gallup reported that the Court’s approval rating sank to forty percent in September, the lowest in the two-decade history of the poll.

Although the Constitution sought to render the judiciary impervious to outside influence, through much of the Supreme Court’s existence, it has tended to echo public sentiment. For example, in many of the equal rights decisions in the late 19th/early 20th centuries, the Court limited Constitutional guarantees for Black Americans in a nation in which most white people, both North and South, found the prospect of politically and socially mixing with people of color anathema. The same was done with respect to Asian Americans in the first half of the 20th century.

In those decisions, however, the justices were supporting not only the preferences of a majority of Americans, but also adhering to their own political views. More telling was when the Court came under pressure not to buttress personal beliefs, but instead rule against them. Although most well-known is when the Court suddenly reversed course and upheld New Deal legislation in the wake of Franklin Roosevelt’s failed attempt to add justices, more to the point was the 9-0 vote in the most important equal rights decision of the 20th century.

In 1952, the Court was asked to declare school segregation illegal, which meant overturning the 1896 “separate but equal” doctrine in Plessy v. Ferguson. The odds for the plaintiffs did not seem great. Four of the nine justices were from the South: Hugo Black of Alabama, who had written the decision upholding Japanese internment in Korematsu v United States; Tom Clark of Texas; Stanley Reed of Kentucky; and Chief Justice Fred Vinson, also from Kentucky. Other justices, notably Felix Frankfurter, revered precedent and ordinarily would be loath to directly refute an earlier Court’s judgment.

However, while the law had not changed since 1896, the social and political climate had. With African Americans having served honorably in two recent wars and athletes such as Jackie Robinson and Larry Doby enjoying surprising popularity, many of the myths perpetuated by white supremacists about Black Americans had been dispelled. For the first time, most white Americans outside the South had come to see unequal treatment based on race as unfair. In the South, however, segregation was a socioeconomic cornerstone, as well as the source of white political power.

Five cases, lumped together as Brown v. Board of Education were first heard in early 1953 and then reheard later that year. By the time Brown was decided in May 1954, Earl Warren had replaced Fred Vinson and knew that for a decision this volatile, the Court must speak in one voice. The pressure on Hugo Black, Stanley Reed, and especially Tom Clark to hold the segregation line was immense, but, for the good of the country, all eventually signed on to Chief Justice Warren’s assertion that “separate but equal is inherently unequal.” Although de facto school segregation persisted — and still persists — it was without government sanction and eventually led to all forms of legal segregation being cast aside.

Far from clear is whether the justices on the current Court will behave similarly about voting rights, especially since their track record to date has been far from encouraging. In addition, the recent conservative appointees seem to have been nominated not only for youth and legal expertise, but also, as their public statements indicate, for arrogance. Still, there may be hints as to whether this group will alter their preferences in response to public pressure.

On November 1, the Court heard arguments on a challenge to the Texas abortion law. Conservative justices have twice refused to block implementation of the law on procedural grounds — leading to bitter divisions in their ranks — but the Court has yet to decide whether offering a bounty to private citizens or forbidding abortion after six weeks, when most women don’t even know they are pregnant, violates constitutional guarantees.

There is little doubt that the six conservatives are personally opposed to abortion and would love to be rid of Roe v. Wade, both on religious grounds and because they view Roe as bad law. Fellow conservatives have argued for decades that there is no “right to privacy” written into the Constitution and the decision, written by Nixon appointee Harry Blackmun, was not interpreting law as much as making it up. Still, with a sizable majority of the American public — and an even larger majority of American women — opposed to outlawing abortion, Texas’s ham-fisted legislation has been widely condemned.

The Court will have three alternatives in deciding the constitutionality of the Texas law, each of which may give a sense of how the remainder of term might play out.  If the conservative justices go for the jugular and declare the law constitutional, it is an indication that political pressure has not impacted them, which bodes badly for voting rights. This, unfortunately, is a real possibility. If, on the other hand, they unequivocally declare the Texas law unconstitutional, not at all a likely prospect, political pressure will have surely impacted their deliberations.

Most likely perhaps is that the justices, in the face of mounting disapproval, will choose to continue whittling away both abortion and voting rights by finding procedural reasons to avoid ruling on the challenges or voiding some pieces of the law while keeping others intact. If the Court chooses this alternative in the Texas case, we can expect a similar erosion of other constitutional guarantees, as well as additional public pronouncements by conservative justices that they simply interpret the law without personal prejudice.

And so, there is little choice for the sixty percent of Americans who decry the Supreme Court for acting as a third political branch of government but to relentlessly continue the outcry for reform. It may not be enough to turn Justices Alito, Thomas, and Barrett into Justices Black, Reed, and Clark, but it is the only hope of preventing America’s further descent into anti-democracy.