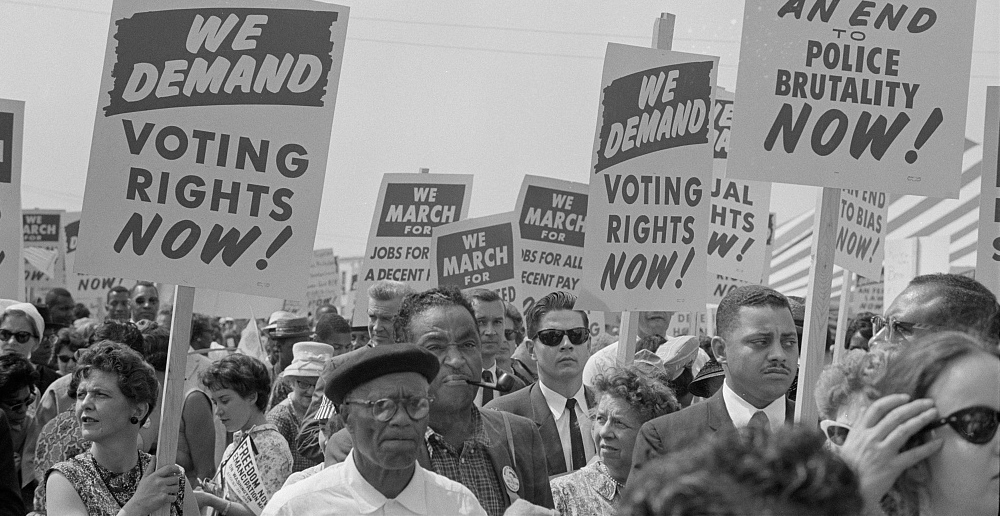 That voter suppression is antithetical to democracy seems axiomatic, particularly if democracy is defined as rule by the majority. It is also, however, perhaps the most effective means for a minority to attain and perpetuate control of an elected government. Since it will not do to admit to cheating one’s way to power, voter suppression is generally couched in such euphemisms as “preventing voter fraud,” or “ensuring that only those able to understand for whom they are voting get to cast a ballot.”

Both minority rule and the voter suppression that enables it have been more or less American traditions, achieved largely through the systematic repression of African Americans. From the Constitution’s 3/5 clause, which granted slave states a bloated voice in both the House of Representatives and the Electoral College, to post-Reconstruction Jim Crow constitutions, which counted African Americans for apportionment while denying them the vote, true majority rule in the United States, if indeed it ever existed at all, has been restricted to an extremely thin slice of the nation’s history. With the 5-4 decision in 2015 in Shelby County v. Holder, which declared key provisions of the 1965 Voting Rights Act unconstitutional, it is distinctly possible that the degree to which voter suppression is allowed by the Supreme Court will determine who will be elected president in 2020.

While race-based discrimination is universally denounced, albeit sometimes a bit hypocritically, less clear is whether restricting primary elections to registered members of a political party is merely another form of voter suppression, or instead a legitimate method by which like-minded citizens can ensure that their views are accurately represented in a general election.

The answer will not be found in the Constitution.  The men who drafted the document in 1787 did not anticipate the rise of political parties. Federalists, who dominated both the convention and the early government, were bound more by philosophy than structure, and those who opposed the Constitution were diffuse and disorganized.

To the founders, including Madison, Hamilton, and John Adams, voter suppression was not an evil but a necessity. Only a select few, they were convinced, should be allowed to chart the nation’s course. Voters in most states were required to own property; in the others pay taxes.  In the first presidential election only 6% of the population was eligible to vote and only 2%— 42,000—actually cast ballots.

Not until the third presidential election, in 1800, did the first genuine political party, Jefferson’s Democratic Republicans, make an appearance, and Jefferson’s victory over John Adams was due solely to the slave states’ electoral vote premium. As political parties hardened into a strict two-party system, the process of choosing a candidate grew to be as important as the general election in which that candidate would compete—more important in areas where one party was dominant.

In the 1890s, primary elections began to supplant party caucuses as a means of democratizing the selection process, but soon became a tool of repression in the one-party South. Democrats, assured of victory in virtually every election held in a Jim Crow state, instituted the “white primary,” in which African Americans, regardless of party affiliation, were excluded. As Thurgood Marshall wrote, “It is one of those little ironies of which Southern politics is full, that the primary movement, which was motivated at least in part, by democratic motives and a desire for wider participation in the representative process, was turned into a device for eliminating millions of Negroes from participation in government.”

As the Supreme Court had ruled in 1921, in Newberry v. United States, that primaries were not “elections” as defined by the Constitution, two years later, in 1923, the Texas legislature passed a law prohibiting black voters from participating in primary elections. In 1927, in Nixon v. Herndon, that law was struck down. Oliver Wendell Holmes wrote for an unanimous Court, “It seems to us hard to imagine a more direct and obvious infringement of the Fourteenth Amendment.”

Texas jiggled the law in 1928 to allow state executive committees to set primary voter requirements, but that was voided in 1932 in Nixon v. Condon, although this time by only 5-4. The majority noted that if the Democratic convention had set the rules, instead of the state executive committee, the law would have stood. A political party, the reasoning went, was a private organization, not subject to Fourteenth Amendment guarantees, so if the government overlap was eliminated, the law would pass muster.

Texas followed those instructions and delegated primary voting rules to the state’s political parties. In 1935, the new rule was upheld in Grovey v. Townsend, in which a unanimous Court ruled a political party was a private organization and could make rules as it saw fit.

Nine years later, however, the white primary was formally interred when, in Smith v. Allwright, the Court ruled that primaries were an “integral part of the elective process,” and therefore protected by the Fifteenth Amendment, and no state could abdicate its obligation to enforce its guarantees. Although Smith v. Allwright had exposed the contrivance of using the “private organization” as a vehicle of racial discrimination, the notion that a primary could be limited to those registered in the appropriate party was unquestioned.

There are, of course, substantial differences between disfranchising members of a particular race and restricting participation to those who identify with the group holding the election. There is an element of choice present in the second that does not exist in the first—anyone who wishes to vote in a primary can do so by registering with the appropriate political party. Nonetheless, in each case a substantial voting bloc is barred from a step in the electoral process that is as—often more—important that the general election that follows. It can hardly be argued therefore that closed primaries are a democratizing force.

Including independent voters in primaries would do more than simply expand the electorate. Independents tend to be a good deal more moderate than party zealots, so including them in the primary would make it more difficult to win as an extremist, thus facilitating cooperation in the ensuing electoral body.

Of course, if a potential candidate no longer needs a party apparatus to enter a primary, why have political parties at all? Every candidate—and every voter—becomes a de facto independent. But political parties are also vehicles by which money and influence are channeled into the political process, so they will not wither and die. Opening primaries and making them less the sanctuaries of the fringes might not take money and influence out of politics—it is hard to imagine any reform achieving that goal—but, as with eliminating race-based voter suppression, democratizing the electorate will help shift focus toward more manageable and effective government.

Lawrence Goldstone is the author of many works of fiction and nonfiction, including his latest book, "On Account of Race" which can be purchased on Amazon.

Lawrence Goldstone is the author of many works of fiction and nonfiction, including his latest book, "On Account of Race." Learn more at www.lawrencegoldstone.com