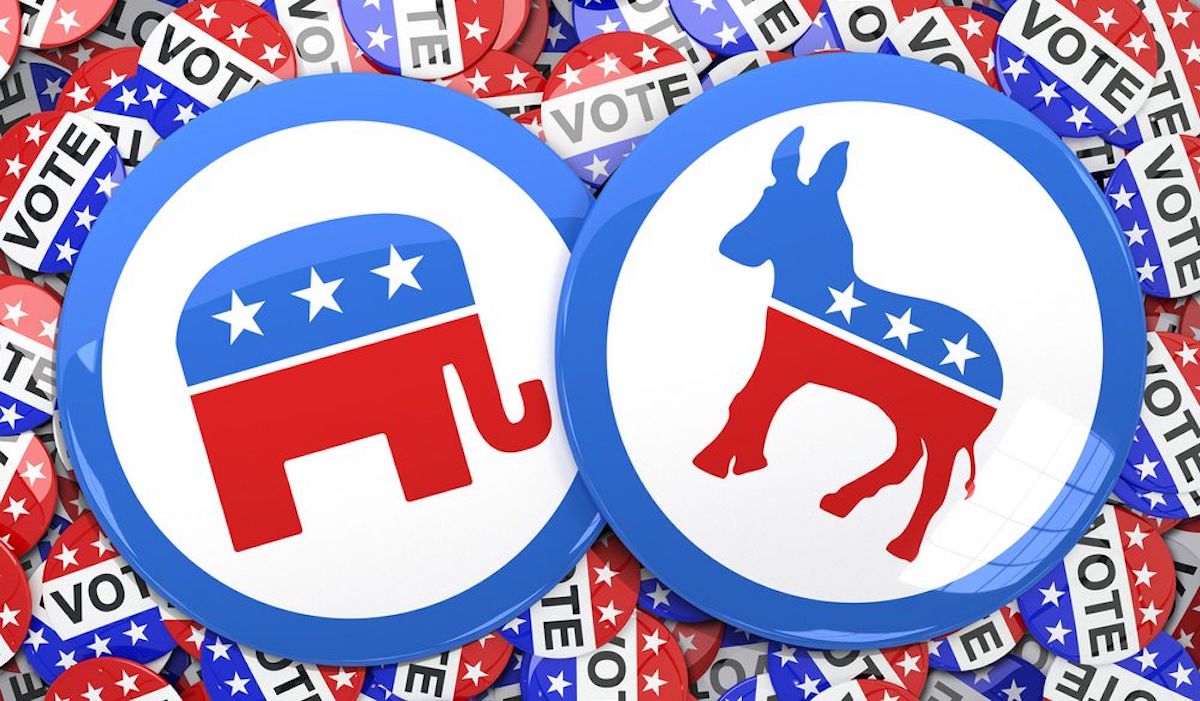 Do we think it’s just "happenstance" that we’ve had just two parties (that have achieved representation in our government) for 200+ years? Do we think it's just by chance that the Greens, Libertarians, and Socialists just haven’t caught on yet?  That only once in a blue moon does an independent get elected?

If you listen to the talking heads of the U.S. political world, you’ll often hear the phrase “our two-party system.” And you probably won’t give it much thought, as it’s a pretty valid description. Despite the existence of minor parties (Green Party, Libertarian Party, etc.), only people with a “D” or “R” after their names (with scarce independent exceptions) get elected to national office.

And it has pretty much always been that way. The Republican Party came to power in the mid-19th century in time to nominate Abraham Lincoln, and joined the pre-existing Democratic Party in a duopoly that has dominated the American political landscape ever since. That match-up succeeded a Whigs vs. Democrats match-up just prior, which had evolved from a duopoly of the Federalists and the Democratic Republicans (no, not a typo), the party of Thomas Jefferson, at the turn of the 19th century.

Interestingly, only George Washington was elected president without a party label. This history being our guide, I would also submit that any party that did catch on would quickly displace one of the two pre-existing parties.

That we became a country with two parties soon after our nation’s founding seems obvious by any read of history, but the “system” part of "two-party system" indicates something more planned or intentional.

One might search for plans or intentions of this nature in the U.S. Constitution. Nope, nothing there. The Constitution is silent regarding parties and any sort of primary process that gives us our November candidates. What we have is instead a two-party “result” than a system.

Constitutionally encouraged or not, parties have much on their side. They have existed under virtually every form of government worldwide, and in the U.S., they have enjoyed consistently favorable “freedom of association” legal protection. They are here to stay.

So then, if not a system, why do we have the stubborn two-party result? The answer lies in a flawed election structure wrapped in years of well-funded inertia. What’s the structural part? Most of our elections in this country — including how the states award their electoral votes, and how we elect senators and congressmen in most states and nationally — are, almost without exception, plurality winner-take-all contests.

The most votes wins and any third party or third candidate is beaten down as a spoiler.

Ralph Nader’s political career basically ended in this “spoiler” role in 2000. Strong candidates outside the two parties now go there at their own peril.

Witness that Michael Bloomberg  will not run as an independent just this year. That was likely Bernie Sanders’ conclusion when choosing to run as a Democrat this year rather than as a Democratic Socialist.

Ron Paul ran for president as a Libertarian in 1988, but scampered into the GOP fold in 2008 and 2012, as did his son, Rand, this year. The so-called Tea Party decided not to be a third party at all, but instead to work within the GOP.

The third-party hill to climb is just too steep when plurality wins drive the results.

Yes, the two-party tendency here is very strong (so strong, there is a “law” named after it—see: Duverger’s Law). The second piece is well-funded inertia -- the king-of-the-hill status enjoyed only by the Dems and GOP comes from years of party and funding infrastructures, ballot access laws, media preference, etc. The two parties on top are given (and have given themselves) big bats with which to beat down the upstarts.

How does our two-party status compare with other democracies? The Democracy Index is compilation done by the Economist Intelligence Unit of The Economist classifying all countries on their state of democracy. It ranks 21 countries in its “full democracy” classification, the U.S. included.

In a separate listing of parties by country, Wikipedia (with United Nations sources) shows 18 of these 21 countries as “multi-party,” defined as having three or more parties that have significant representation in its legislature. Multi-party democracies include the United Kingdom, Germany, New Zealand, Sweden and Switzerland, among others.

The U.S. shares two-party status only with Malta and Australia among those 21 full democracies.  The rest of the world proves to us that our choice doesn’t need to be so limited.

Here in the U.S., our two-party duopoly has sidelined approximately 42% of us — we identify as independents rather than with either party. Meanwhile, the 2016 presidential race is Exhibit A that all of us have to live with the product of these two parties and the country-club rules by which they choose the two candidates that end up our only real choices in November.

The two-party stranglehold will not go away without hard work; it will need to be dismantled strand by strangling strand.

State by state, we must make structural changes--require majority results through runoffs and instant runoffs (ranked choice voting), open primaries, and nonpartisan primaries. What about multi-member districts with proportional representation (used by many of those 18 democracies with multiple parties)? The list goes on.

There are encouraging examples of structural change. Some states, including California and Washington, have moved to nonpartisan “top two” primaries for statewide elections, which forces a majority result in their general elections.

This year’s display of buffoonery and insider arrogance in both parties says it’s time to do much more to break the stranglehold. Hey, you political talking heads out there, can we start talking about this?