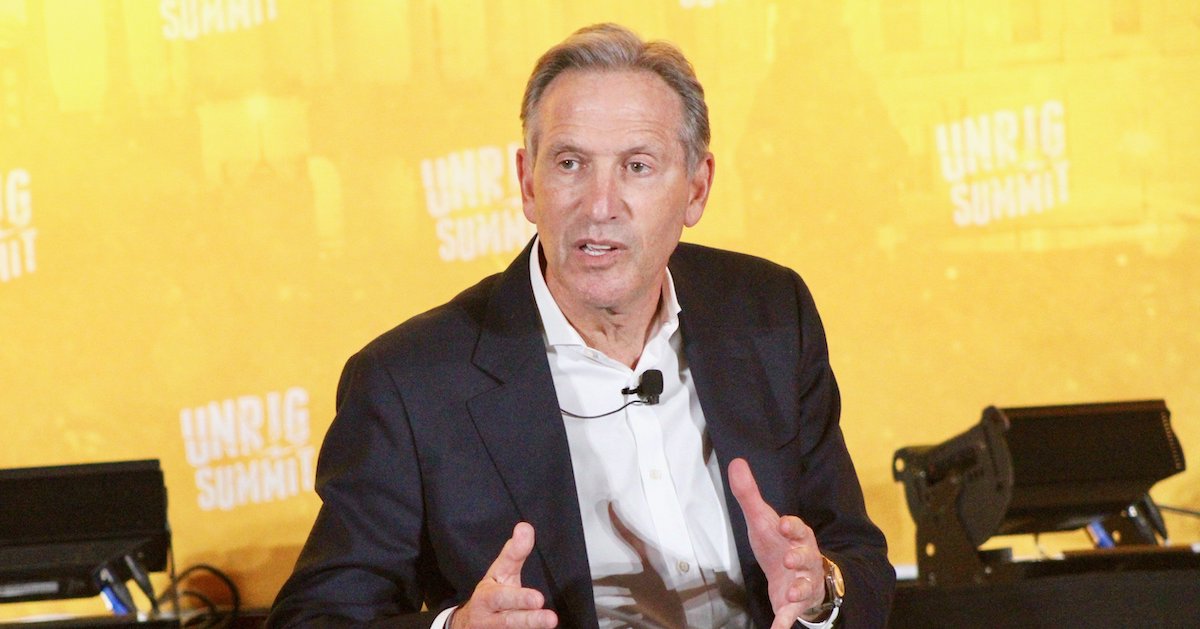 It's Okay to Be Really Good At Selling Coffee

He's referring to a chant raised by a few loud attendees at the Unrig Summit in Nashville, Tennessee, Sunday when the Starbucks Founder and CEO took the stage to address election reform and stump for his 2020 candidacy.

The young rabble rousers, the most privileged and wealthy generation in the history of the world, with more opportunities to succeed than anyone has ever had, who grew up in this very clean, safe, comfortable cradle of civilization painstakingly built by businesspeople like Mr. Schultz shouted out their rage and derision with all the fury of fired up 18th century French Revolutionaries.

If that's who they think they are, they better think twice.

Or maybe they missed the Unrig Summit's Ranked Choice Voting Panel the day before, at which Alan Schwartz, chair of Guggenheim Partners quite astutely noted:

It is so much easier, such a simple thing to do, that we see it every day in our politics, not from skilled people, but from mediocre people who can find a way to get you aggravated.

And in our polarized elections all you have to do is get someone to be angry at the other side. You don’t have to do anything for them.

Now to get to people’s aspiration you need to be able to get people to gather where they can put their anger aside. because if you want to look at anger throughout history, every person who rose to a leadership rank in the French Revolution lost their head."

It seemed to me watching as the vocal cohort led their chant that they had already lost their minds.

It's Okay To Sell Coffee

They hurled the word "billionaire" at Mr. Schultz as an epithet and an accusation, completely dropping the context for how he came to be responsible for so much wealth: Selling people coffee.

The very ones chanting were the ones who willingly parted with their money to get some of his coffee and drink it in a cool environment.

They were acting as if he had hurt someone or done something wrong. Selling coffee is not a crime against humanity.

Being the best coffee salesman in the history of the world is not a stain of guilt. It's an extraordinarily admirable accomplishment.

And the way he did it was extraordinarily admirable from the very perspective of those socialists who were shouting him down Sunday.

He gave his workers health insurance and stock options in his company. He didn't wait for politicians to make him to do it.

He just did it because he cared about his employees. He didn't exploit anyone to build Starbucks into one of the world's most valuable respected, trusted, and beloved brands.

He created hundreds of thousands of jobs for people, and they're highly sought after jobs with unusually good benefits.

Howard Schultz did all of this playing by the same rules as everyone else in America, and starting off with less privilege and opportunity than many in America enjoy, most likely even many of his critics.

They're afraid that he will be a "spoiler" who will split votes away from the Democratic candidate in 2020 and assure Trump of a reelection victory, but they don't even really know, and couldn't possibly be sure that this would be the outcome of his campaign.

It's what they're afraid of, but no one has done any work to evidence that likely Schultz voters will vote for the Democratic candidate instead if he doesn't run.

They're afraid, but their fear is based on one of the oldest partisan tropes that props up the rigged two party system in America, not on a substantive analysis of the 2020 election.

Maybe Schultz will pull away Trump voters who wanted someone outside the establishment who's proven their leadership skills and worldly acumen at the highest levels in business, and like Schultz even better because of his kindness and dignity.

Or maybe he'll pull from both parties and the broad cross section of independent voters as well as a potentially vast number of Americans whose voting patterns don't even exist yet to analyze because 2020 will be the first time they've ever voted.

People trapped in the old ways of thinking about politics think this is impossible, but it would be the height of hubris for anyone in these times to be so sure of what is possible and what isn't.

The reality is we don't even know yet who the Democratic Party nominee is going to be for 2020.

So how can Schultz' hecklers be so sure the Democrats will pick someone that they would consider-- according to their own judgement-- to be better than Howard Schultz?

Or even Donald Trump?

Because that's what they're saying.

Would any Democrat be better than Trump? What about Michael Bloomberg? He's a billionaire. Will they care if Schultz spoils that Wall Street billionaire's chances to unseat Trump?

Do they really care that someone better than Trump wins or that the candidate isn't a billionaire? Or do they just want the Democrat to win no matter what, no matter who it is?

Because that is precisely what they're saying they want, and that is exactly the kind of thinking that has led us here.

Such an apparently partisan agenda seemed out of place at the Unrig Summit. It was Republicans and Democrats who rigged the system in the first place. And rigged the minds of voters to think only in the most narrow, partisan terms.

The real spoiler of American government has been the two party system and its iron-fisted duopoly over the levers of political power in this country. Along with his legendary accomplishments it is to Howard Schultz's great credit as an astute leader and a great healer that he refuses to play this rigged partisan game.

The intense partisan backlash against Howard Schultz is proof that history's greatest coffee salesman is onto something. Proof the partisans are afraid an independent could really win.