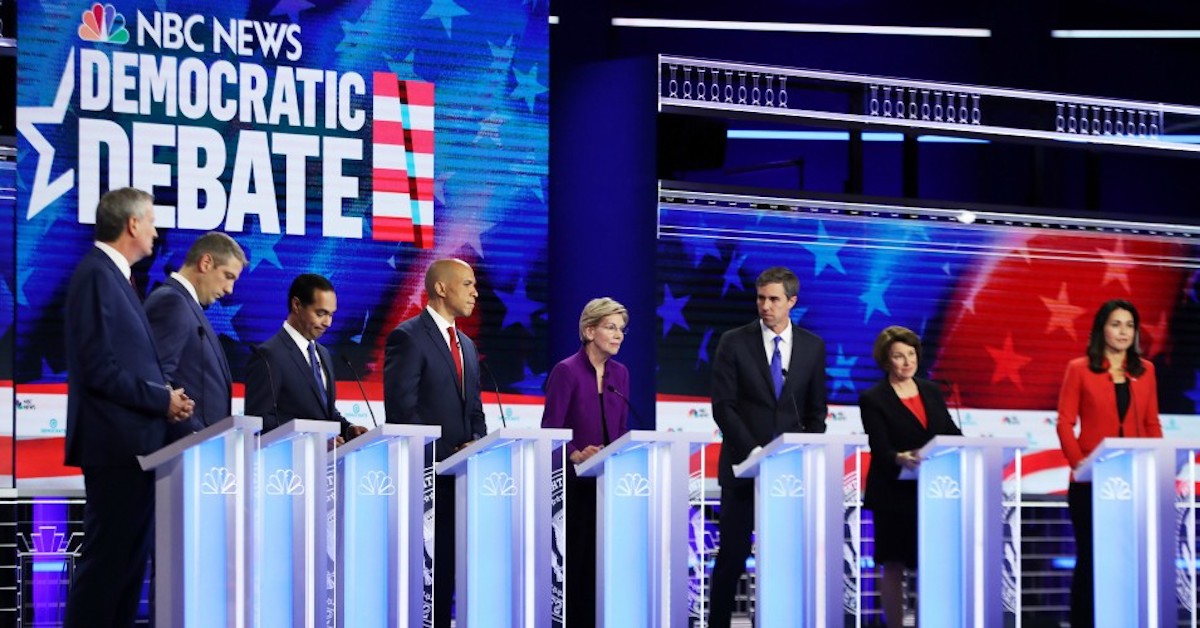 Out of 25 major candidates vying to be the Democratic nominee for president, only 20 will be provided an unparalleled platform to reach potential voters. The party’s exclusion of five notable candidates from the second round of debates on July 30 and 31 — former U.S. Senator Mike Gravel; Miramar, FL Mayor Wayne Messam; U.S. Congressman and Marine veteran Seth Moulton; former U.S. Congressman and 3-star Navy Admiral Joe Sestak; and hedge fund manager and philanthropist Tom Steyer — is undermining the Democratic National Committee’s (DNC) hope for a unifying primary election season.

While the first contest is over six months away, the DNC finds it important to limit the voices of Democratic candidates to 20. In the process, their basis for excluding candidates has proven arbitrary, perplexing, and apparently anti-democratic. Each of the five exclusions presents its own head-scratching dilemma.

Former Senator Mike Gravel is the only candidate who met the small-donor threshold of 65,000 unique donors, yet is being kept off the debate stage because he did not meet the polling threshold of 1%. Indefensibly, numerous official polls that the DNC used did not include the former Alaskan Senator as an option.

“The campaign has retained counsel and is currently in talks with the DNC over the validity of the polling method of qualification, given that well over half of DNC’s approved polls methodically and consistently excluded Sen. Gravel despite the campaign’s documented, repeated outreach to both pollsters and the DNC for inclusion,” said Gravel’s campaign manager, David Oks. According to Gravel, the DNC has yet to clarify to the Senator whether they submitted the lists of candidates to be polled, or if the polling organizations made that decision themselves.

Massachusetts Congressman Seth Moulton, a Marine Corps veteran who served four combat tours in Iraq, has also secured more individual donations than many of the candidates who are being included in the debates, and has met the polling threshold in polls rated more accurate than the DNC’s official polls. Those official polls, however, have error bars of up to 5%, making the DNC’s 1% polling threshold statistically meaningless.

“Moulton… is running in the Democratic presidential primary on a platform of keeping our country safe and secure, taking back patriotism for our party, and encouraging every American to serve our nation. These issues need to be discussed in our party’s debates if we want to select the best candidate to take on and beat Donald Trump,” said Marie Harf, Moulton’s Deputy Campaign Manager.

Another military service member being shut out of the early debates is former Pennsylvania Congressman and retired Navy Admiral Joe Sestak. After serving their nation honorably in the armed forces and as elected leaders, it seems odd at best to shut them out of so-called “democratic” debates.

Wayne Messam, the mayor of Miramar, FL, is another public servant being shut out of the debates and most media coverage of the primary contest. It is bizarre that Mayor Pete Buttigieg has become a media darling as the mayor of an even smaller city than Miramar. Miramar has a population of 140,000, while South Bend, IN has a population of just 102,000.

“When arbitrary rules that are biased towards congressional candidates, the self financiers or the darlings of media just means another obstacle to overcome. We have the power to overcome it all. Speak up and rise up and we can be heard,” said Messam in a recent tweet.

“This nation must seriously look at an election system that puts some candidates at a financial advantage over others, and a media industry that selectively features candidates on TV while denying others the same opportunity. The American people deserve to have access to as many qualified candidates as possible, not only the ones who can afford to buy name recognition or who already have it,” wrote Messam in an op-ed in Fortune Magazine.

Philanthropist Tom Steyer, meanwhile, is being shut out of the 20-person debates despite polling in 9th place in Iowa, more than six months before the Iowa caucuses on February 3, 2020.

“The Democratic Party has managed to pull off the unimaginable. They have made debates with 20 candidates exclusionary and anti-democratic, while simultaneously exposing their hypocrisy for forcefully limiting the general election debates to just two voices,” said Open the Debates founder Eli Beckerman.

“Voters deserve to learn about all of their choices on the ballot,” said Beckerman. “They should have the opportunity to hear from all serious candidates for this important office, without interference from the DNC. If the party wants to rely on polls, they could ask who voters would like to see included. The wisdom of democracy is letting voters decide.”

Editor's Note: Open The Debates originally published this release on the group's website. It has been republished with permission from the organization.