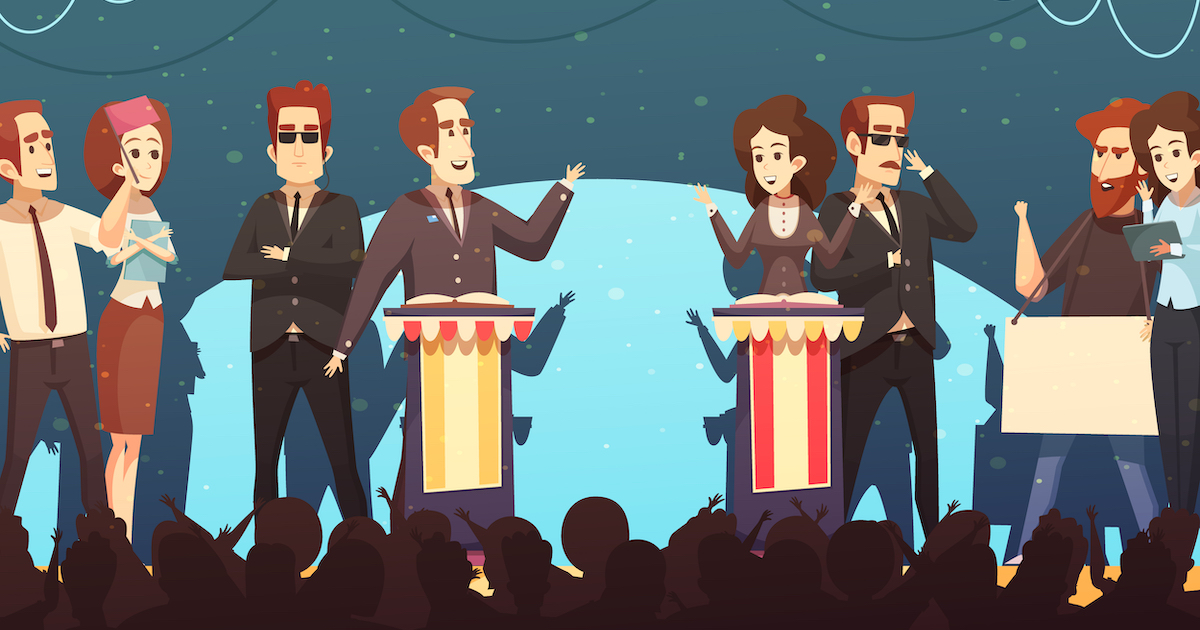 7 Reasons Why Independent Presidential Debates Will Save America in 2020

Independent and third party candidates more often than conventional candidates clearly identify America’s core challenges, pains and crises. They sometimes present well-considered solutions, though they may not know enough about the legislative and executive branches of government to implement those solutions. Still, here are seven reasons why independent presidential debates and forums will save America in 2020.

Whether driven by public service or personal ego, every single Democratic or Republican candidate running for office is tainted by Big Money in politics. Corporate greed drives legislation and policies that now take shape as non-stop assaults on children and working families, our natural environment, our local food supply, our privacy, our Constitutional rights and America’s place in the world. In general, independent and third-party candidates reject donations of Big Money and so are more likely to see and speak the truth. The voices of independent and third-party candidates must be heard.

I do not see mainstream presidential candidates calling out the issues that are truly devastating our families, neighborhoods and America as a whole. The two-party candidates fail to speak convincingly about mass incarceration, neglected veterans, domestic violence, sexual trafficking of children, opioid addiction, contaminated water, environmental dangers, family court abuses, policies pressing farmers and ranchers toward bankruptcy and suicide, the health impact of everyday poisons, the legacies of slavery, the scars of racism, the intolerable violations of trusts and treaties with our First Nations, and the obscene futility of forever wars.

Even when a politician or candidate raises one or a few of those issues, none call out the Democratic and Republican legislation and policies that permit these horrors. Independent and third-party candidates more often shine a light on the disastrous consequences of the laws and regulations written by the broken 2-party duopoly.

The life experiences of Americans devastated by misguided and corrupt legislation and government policies are nearly impossible to take in. The heartbreak of working Americans betrayed by our own government is almost too much to hear. Politicians funded and supported by greed-driven corporations in turn enable the negligence of government agencies. Who else other than an independent or third party candidate can rise above the corruption endemic to the two main political parties in America?

Problems cross political and agency boundaries. Solutions require sets of related actions, enduring mechanisms of coordination and true measures of the most desired results. Best practices and promising innovation abound in every arena of government and American life. We have the solutions, yet ego and corporate greed stand in the way of those solutions. Success requires listening to and moving forward with We, the People to transform the culture and practices of all federal agencies.

As an independent presidential and then third party congressional candidate traveling America (2015-2016) and then upstate New York (2018), the one theme I heard the loudest was the wish and often demand for true JUSTICE. This lack of justice is felt across nearly everyone’s experiences with law enforcement, family court, health care, education, our degrading environment, over-reaching regulations, and the full burden of toxic chemicals in our water, air, soil, food, clothing, medicines and everyday items including firefighters’ foam and gear.

Injustice is linked to both the actions of our federal agencies and the expectations intended by the Constitution of the United States. I learned more about the Constitution as a political candidate than in all of high school, college and graduate school combined.

The loudest voices begged for attention to violations of free speech, due process, unreasonable search and seizure and many other ways our government stomps on our Constitutional rights. These voices came from families with children irrationally and illegally taken by the state; veterans worn down by wars we do not have to fight; farmers and ranchers facing extermination by profit-driven federal policies; families struggling with the health impacts of everyday poisons especially known and unregulated toxins in our water; and communities flooded over, burned down or dried out, confronting inefficient agencies that should and DO NOT prevent, respond and mitigate these disasters.

Many examples demonstrate the urgency and interconnections of America’s challenges, though family-owned dairy farming well serves as a microcosm of systemic problems and solutions. The destructive intersections of corporate greed, misguided government policies, urban bias, the violation of our Constitutional rights, false advertising that misleads consumers about nutrition and health, a full range of environmental stressors and the realities of climate change are combining to destroy rural America.

Driving the eradication of family farming and ranching are federal policies that forcibly set regional prices for farm milk without including the true cost to produce that milk; banking and trade policies that favor large-scale industrial agriculture over small farms; practices that allow the morphing of dairy co-operatives from farmer support alliances to profit-driven corporations; and agencies ignoring the straight out lies broadcast on public television that hide the health, nutritional and environmental impact of “nut beverages” and “fake food.”

Our federal government is literally re-defining the meaning of “milk, meat and fish” to give advantage to laboratory-grown, chemically-enhanced, and genetically engineered products. We are losing control of our local food supply. Dairy farmers are screaming the loudest while well-intentioned consumers are played by Big Money and the globalization of food. As with so many other issues, only independent and third-party candidates can uniquely speak to the urgency of America’s challenges.

While most candidates and politicians call for unity and bringing America together, their on-stage hypocrisy grabs the spotlight when both Republicans and Democrats go into attack mode and demonstrate their core motivation is simply to defeat the other party. We cannot have unity in America without the political courage to look deeply at the issues we are all facing and agree on well thought out solutions. That courage and willingness to listen takes a level of humility and openness I’ve only seen from independent and third-party candidates.

America has run out of time. Our hopes for the 2020 elections require a foundation of integrity, courage, listening, knowledge, justice, urgency, humility and unity. My prayers are with America. I call for the widespread broadcasting of independent and third-party presidential forums and debates.

Dr. Lynn S. Kahn was a third party candidate for New York's 21st Congressional District in 2018. She ran for president as an independent in 2016. Her platform calls for Transforming America by Transforming Government.