Could Republican John Cox Surprise California By Picking Up Democrat and Independent Votes?

He's a political outsider that wants to upend the establishment. He wants tougher immigration policies. He has a strong business background. And his messaging is now reaching an electorate that's growing more and more impatient by the day.

Sometimes in politics timing is everything, and for Republican John Cox, it might just be his time.

Yes, in deep blue California the thought of a Republican beating the establishment candidate Democrat Gavin Newsom might be a pipe dream, but Cox just did something that few other candidates have done, single out independent voters and promise to target them.

In a television interview on primary election day Cox said, "I'm going to reach out to moderate democrats and independents who can't afford to live here."

As reported by IVN, the fight for Governor in California will likely be decided by the independent vote. If the Cox campaign can focus solely on the second largest voting bloc in California, now independents, he could have a shot at winning the election in November.

The latest Public Policy Institute of California PPIC polling data shows Cox and Newsom tied at 18% for the independent vote.

PredictIt Has Cox Losing To Newsom

PredictIt is an new, real money site that tests a bettors knowledge of politics and lets voters make and trade predictions on future events.

The site has a page dedicated to California politics and the primary election. While most experts and the polls agreed that Cox would finish second, those same politicos aren't giving Cox much of a chance in the November General election against Gavin Newsom. 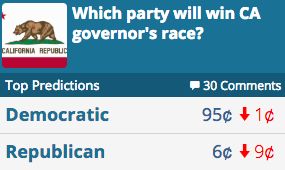