The Case for Proportional Representation in the United States

Our entire system of voting in America is in crisis. Gerrymandering, voting law changes, and the "overbearing majority" practiced by both parties has left a general feeling of disenfranchisement among a growing cross-section of the population.

A reasonable solution is a system of voting that does not encourage partisanship or gerrymandering.

Kansas has been considered a safe, solid-red state for many years. Republicans have won every U.S. Senate contest since 1938. Only four representatives have been non-Republican since the 1980s. The majority of elections have been won by roughly a 60-40 margin.

In an almost "what's the point" statement of the political landscape, two of the four seats were not even challenged by Democrats in 2012.

A large majority is still better than the 51 percent "overbearing winner," but it still leaves 40 percent of the people without a voice. We are used to thinking in terms of "red states" and "blue states," but here is a political map not often shown in traditional media outlets: 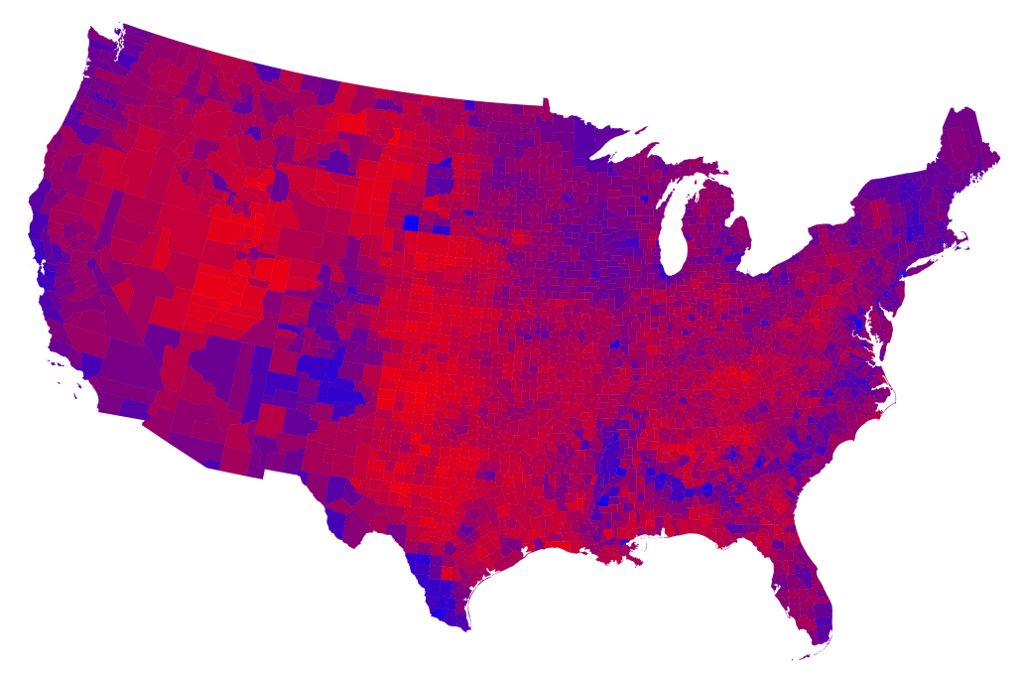 Even the reddest and bluest states have a purple tinge, proving that the current system is really not representing voters very well.

With a population of 2.8 million, at least 40 percent of the voters in Kansas have been almost completely unrepresented in Congress for the past 25 years.

Congressional districts center around these features: KS-1 encompasses over two-thirds of the state and is predominantly farming communities. KS-2 includes the cities of Topeka and Lawrence -- along with the eastern portion of the state. KS-3 is almost exclusively the Kansas City metro area. KS-4 includes Wichita and south central Kansas. 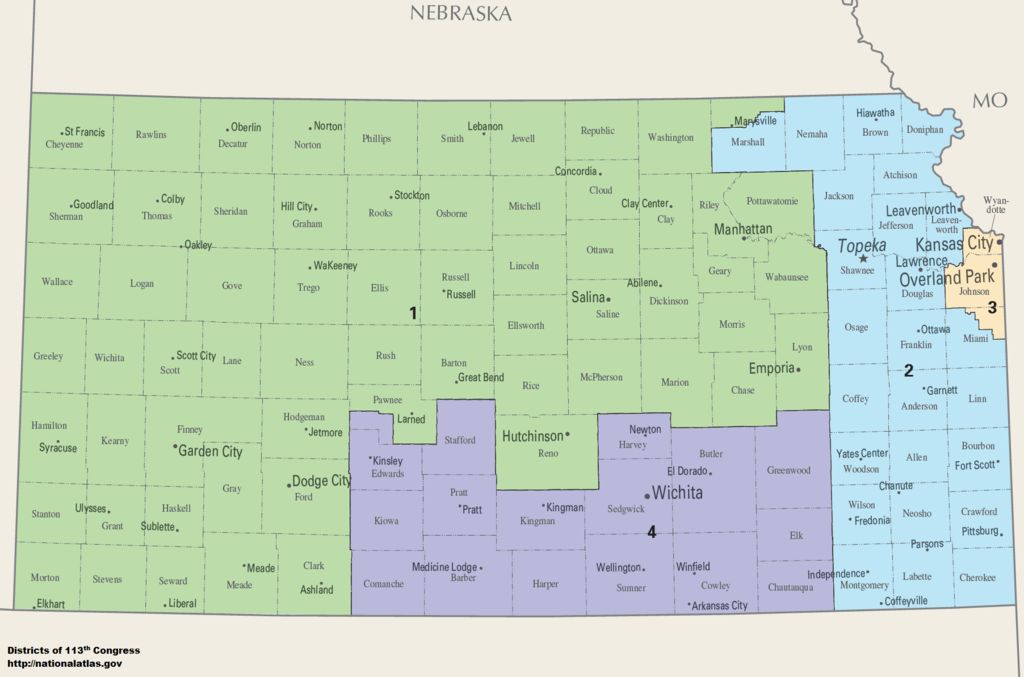 While the map appears fairly straightforward based on metropolitan areas, it is not entirely without faults. Northeast Kansas has a reasonably strong Democratic voting preference, with both Douglas and Wyandotte counties favoring Obama in 2012 by better than a 60-40 margin. The design of KS-2 and KS-3 splits up this voting bloc and reduces its overall power to influence elections.

Probably the oddest feature about the House members from Kansas is that they are all relatively new to the House. Three were elected in 2010 and the other in 2008 -- all four were active in state politics before running for the House.

Fourteen candidates are running for the U.S. House in 2014 -- 6 Democrats, 7 Republicans, and one Libertarian. The primary election is on August 5, after which 9 candidates will be on the ballot for the general election.

While gerrymandering in Kansas is not the "refined art form" it has become in several states, the cure for it nationwide may be to eliminate congressional districts altogether.

Members of Congress are not beholden to voters. Congressional districts are roughly comprised of 700,000 people, 40 percent of whom (in Kansas) are not adequately represented. We have a system where politicians are more loyal to their parties than their constituents.

While Kansas is one of the "reddest states," the problem becomes even worse in swing states where elections are mostly won by a 1-2 percent majority, leaving almost half of the voters without representation.

Without congressional districts, proportional representation is a competition for a percentage of the seats -- not just for individual races for individual seats.

Since half of the seats went uncontested in 2012, the data from 2010 gives a clearer picture: 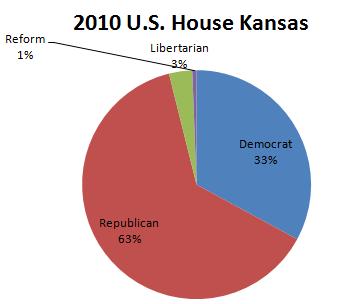 Under proportional representation, Republicans would have still claimed the lion's share of the seats (3 of 4) -- yet Democrats would not go unrepresented, claiming one seat. Because the minor party candidates did not capture enough votes to earn 25 percent of the ballot (or sway the results with or without transferable ballots), they do not earn any seats.

There are clear advantages to this system:

There are some systems that allocate seats for the next election based on the results of the current one. This is slow, cumbersome, and does not allow for many of the inherent wild swings in public opinion that happen in the House.

True proportional representation should only be measured on the results of the current election.

What about larger states?

In most states, proportional representation would be easy to implement, but what about states like California, Texas, New York, and Florida?

Voting for nine candidates at large in Kansas is easy -- but what about voting for the 106 candidates in the general election in California?

In 2012, California's House elections awarded 38 seats to the Democrats and 15 to the Republicans -- far better than most states.

Because of the cumbersome nature of voting in large states, there is probably no way to totally eliminate voting districts in the largest of states. Yet, the total vote could still determine the proportions that seats are awarded.

Editor's note: This article is part two of a multi-part series that examines proportional voting and the potential impact it would have on elections in the United States.

Currently studying the research aspects of business science as a doctoral student in Industrial and Organizational Psychology (GCU)--after completing a Master's in Business Administration, a Graduate Certificate in Human Resource Management (FHSU), and a Bachelor's in Business/Economics (FHSU/UMKC). Curriculum Vitae available through website link.