NJ Attorney General: If You Want a Meaningful Vote, Join a Party 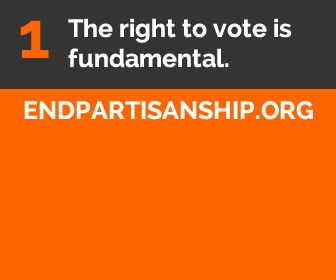 The plaintiffs argue that New Jersey’s closed partisan primary system violates an individual's right to vote because: (1) the primary conditions a voter's right to participate on giving up their right to not join a private political party, (2) the partisan primary effectively dilutes the voting power of non-party voters, and (3) the system violates New Jersey’s own constitutional prohibition against the private use of taxpayer funds.

On July 28, New Jersey Secretary of State Kim Guadagno submitted a reply on behalf of New Jersey. The State argues:

“...a voter who feels disenfranchised because of a regulation that conditions participation in primary elections on party membership ‘should simply join the party.’” p. 4-5

“Thus, the relief plaintiffs seek here... would, if granted, contravene these precedents and uproot one of the hallmarks of our electoral system, the partisan primary...” p. 2

“[No courts] have recognized that unaffiliated voters have a fundamental right to participate in primary elections even when those elections are an integral part of the electoral process.” p. 2

Read the Motion to Dismiss:

Read the Plaintiff’s Reply to the Motion to Dismiss:

Read the Response to the Plaintiff’s Reply:

Shawn is the Election Reform Editor for IVN.us. He studied history and philosophy at the University of North Texas, and joined the IVN team in 2012. He has several years of experience covering the broad scope of political and election reform efforts across the country, and has an extensive knowledge of the movement at large. A native Texan, he now lives in San Diego, California.