For the past decade we have seen a steady erosion of representative democracy. The modern day arms race among powerful interests, which accelerated when poorly designed campaign finance reform was overturned by the Supreme Court decision in the Citizens United case, will likely only get worse with the decision on McCutcheon.

As the money arms race continues, no one has really stopped to ask, why do campaigns actually need so much money?

“This is just what it costs to reach voters,” a typical campaign manager might respond, but that still begs the question of why getting a message out is so expensive in an age when information flows so freely over our networks.

From that perspective, the answer is fairly obvious; voters are getting harder to reach. Politics has become a dirty word that most people now go to great lengths to avoid, driving the cost of reaching voters to historic levels.

Those ads that do get through are designed to inflict as strong a reaction as possible using angry rhetoric that may motivate party loyalists, but more often only make voters more disgusted with politics in general.

This again, in turn, raises the cost of reaching voters leading candidates to spend even more time raising money to reach voters in whatever way they can. The more money raised, the more disillusioned people become, and on and on and on. Unless. 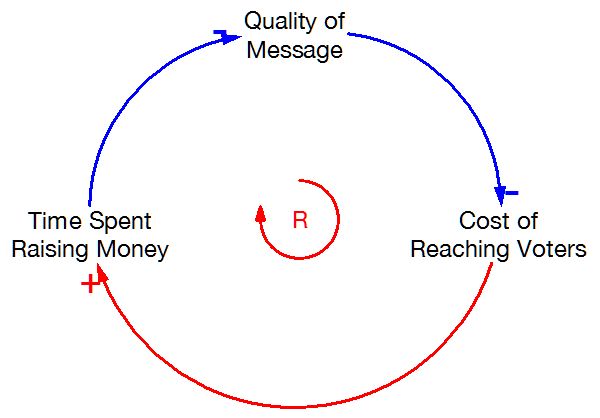 When you take a step back and look at this system, the reinforcing descent of politics seems hopeless. Yet if you can change the direction of just one single point in this endless loop, what happens then?

Let us start with the quality of the message. Instead of a message that no one really wants to hear, what if it was so good people felt compelled to share? As the cost of distributing the message drops, a candidate can spend less time raising money and more time solving problems that produce even better messages. As more people become engaged, the cost drops further.

Now instead of a reinforcing decline, the exact same system is raising politics to a level that has not been seen in over a decade. Yet, if that is all it takes, then why aren’t candidates embracing such an approach? To answer this question, you need only follow the money.

Who is benefiting by sponsoring modern campaigns? I am not aware of any survey indicating that ordinary voters want to spend their money on sponsoring attack ads and robocalls. Instead, I see polls showing that 96% of Americans see money in politics as a serious issue that must be addressed.

There are powerful interests that benefit from the dysfunction in Congress and the disillusionment of the average voter. When representative democracy is weak, power does not need to be balanced, and without a balance of power, our Republic is lost.

So how do we get it back? What can one individual really do? We do not have money to burn on elections. Most of us are just trying to get by. With a large majority supporting campaign finance reform, there is hope that new laws can be passed within a decade, but what happens between now and then? Is there really nothing that can be done?

In 2014, there is a surge of independent candidates promoting bold and innovative ideas for getting our country back on track. If just ten percent of voters pitched in a small amount, most candidates would have an amount of money equal to incumbents receiving support from less than 0.09% of voters. With citizen-funded campaigns, the money will be clean and honest, allowing candidates to be free to represent the people alone, just as the founders intended.

Anyone who has served our country knows that a representative democracy is not free. Right now our country is at a crossroads. We can choose to either slide down the path we are headed or we can claw our way back to the top. Dr. Seuss had it right: “Unless someone like you cares a whole awful lot, Nothing is going to get better. It's not.”

Bruce Skarin is a Massachusetts independent candidate for U.S. Senate. To Learn more about his campaign visit www.bruce2014.org.

Bruce Skarin is a scientist and former independent candidate for the U.S. Senate. He has an unhealthy love for bringing data and models together to dissect and build solutions to complex problems. Bruce writes about anything with systemic problems including legalized corruption, economics, the environment, and social rights.