The number of Americans who identify with either Republicans or Democrats has either stagnated or declined significantly. Consequently, 42 percent of Americans now self-identify as independent; the highest percentage in Gallup history.

Democrats have managed to maintain a 2010-level of party registration, but the Gallup poll found:

"Democratic identification has also declined in recent years, falling five points from its recent high of 36% in 2008, the year President Barack Obama was elected. The current 31% of Americans identifying as Democrats matches the lowest annual average in the last 25 years." 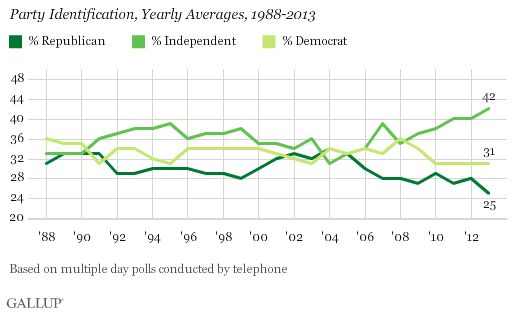 Republicans were hit the hardest. Party registration hasn't been below the 25 percent low since 1983.

The partial government shutdown, which occurred in October, spurred voters to abandon both parties. In the last quarter of 2013, the number of voters who identified as independent grew three percent, a significant leap according to Gallup:

The percentage of Americans identifying as independents grew over the course of 2013, surging to 46% in the fourth quarter. That coincided with the partial government shutdown in October and the problematic rollout of major provisions of the healthcare law, commonly known as "Obamacare." The 46% independent identification in the fourth quarter is a full three percentage points higher than Gallup has measured in any quarter during its telephone polling era.

Many inside the political establishment argue this growing plurality of voters simply don't know what's good for them, and independents are really just partisan voters in disguise. Yet, if this trend continues, voters may be looking for a new option in the 2016 presidential election. In any case, it remains a fact that voters, more and more, prefer not to associate with the parties that claim to represent them.