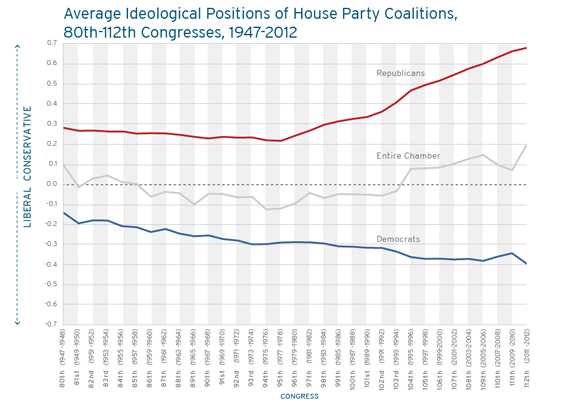 Republicans and Democrats in both houses of Congress are more divided than ever, according to a report titled, "Vital Statistics on Congress," published by the Brookings Institute.

The report documents ideological polarization of congressional coalitions from both parties since the 1940s. It shows the parties have evolved in opposite directions as time has progressed. While the Democratic Party has been become more liberal relative to where it was in 1948, the Republican Party has become more conservative at a much faster rate.

For about 30 years after the end of World War II, the alignment of both parties stayed fairly stable. In fact, House Republicans were on a liberal trend, albeit a slight one. That changed in 1980 when House Republicans started a trend towards greater conservatism.

The shift coincides with the election of Ronald Reagan in 1980 and the subsequent Reagan Revolution. Under the Reagan administration, conservative ideas became more mainstream. Conversely, the Democratic Party remained relatively stagnant in terms of ideology over the same period.

The movement towards conservatism became even more pronounced in 1994, a very important year for the Republican Party. The 1994 midterm elections were marked by sweeping Republican victories at both the state and federal level. Most notably, it was the first time Republicans had majority control of the House of Representatives since 1952.

Party leadership helps to explain these trends as well. Republican leaders emerged like Speaker of the House Newt Gingrich.  Shortly before that, Bill Clinton became the Democratic Party's frontman and the 42nd President of the United States.

The Republican trend toward conservatism has continued over the last decade. When combined with the Democrats’ slower movement towards liberalism, what has resulted is a starkly divided Congress.

As the two parties have moved further apart and inter-party cooperation has diminished, congressional approval ratings have plummeted. It could also help to explain the decline in membership in both parties, as well as the increase in those choosing to register with a third party or as an independent.

Received his Bachelors degree in Communication Studies with a certificate in Journalism from Loyola Marymount University. Interests include maximum personal and civil liberty, minimum tyranny, and the complete works of Christopher Hitchens.