Record Number of Women Elected to Congress in 2012

The 2012 election cycle saw a record number of women elected to Congress. An all time high of 20 women were elected in the Senate, and at least 77 women in the House, with a few races left uncertain.

For the past two years, the 2012 Project worked to ensure 20% of those elected to Congress in 2012 were women. The goal has been achieved in the Senate, with 20 female senators, but House of Representatives fell short in reaching its goal by ten women. (This number is uncertain as of today, since three races in Arizona with female candidates are still undecided). Even if the milestones of 20 percent has not been reached, the 113th will have at least 18.13 percent of women, an all time record, and an almost 8% increase since the 2008 election.

For women, this election was historic beyond the 2012 Project milestones.

1992 was named the "year of woman," after 6 women were elected to the Senate. This year, out of 15 races, 11 women won senate seats. (An interactive map can be found on the Huffington Post) 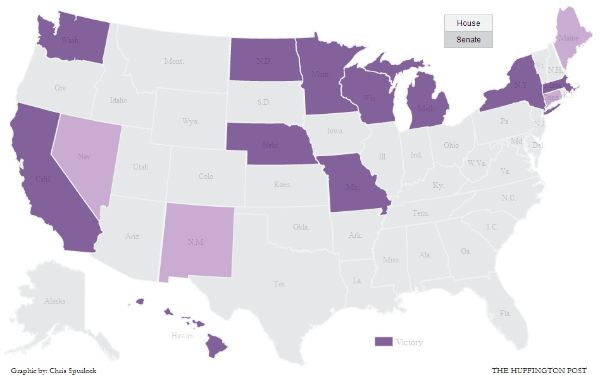 Democrat Elisabeth Warren became the first female senator from Massachusetts by defeating incumbent Republican Scott Brown. Tammy Baldwin was elected to the open senate seat in Wisconsin, becoming not only the first female senator from that state, but also the first openly gay senator in US history. Mazie Hirono, from Hawaii, is breaking many "first" records. She is the first senator to be: Asian-American, representing Hawaii, born in Japan, and Buddhist.

The House of Representatives will also have more women than ever, with 77 representatives (potentially 79 with 2 undecided races), which is 4 more than in 2010. Among these women, Tulsi Gabbard from Hawaii became the first Hindu in Congress. 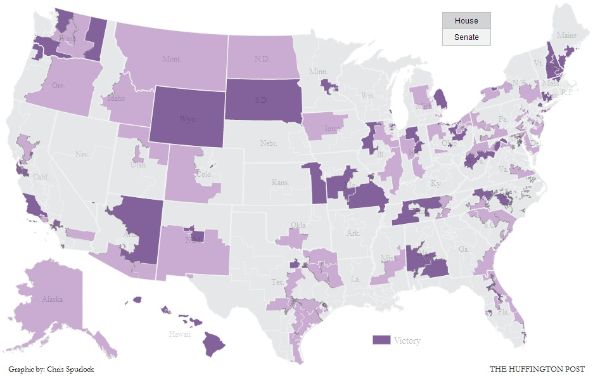 This year is also setting a new record in terms of number of minorities, with 28 women of color elected, including 13 African American women, 9 Latinas and 6 Asian/Pacific Islander-Americans.

The path to close the gender gap remains long, but initiatives like The 2012 Project show that by encouraging more women to run for office, more women will be elected. To achieve parity, a strong model will be needed -- for example, a female president in 2016.

French traveler on a journey to understand the arcane of American politics while enjoying life in San Diego.